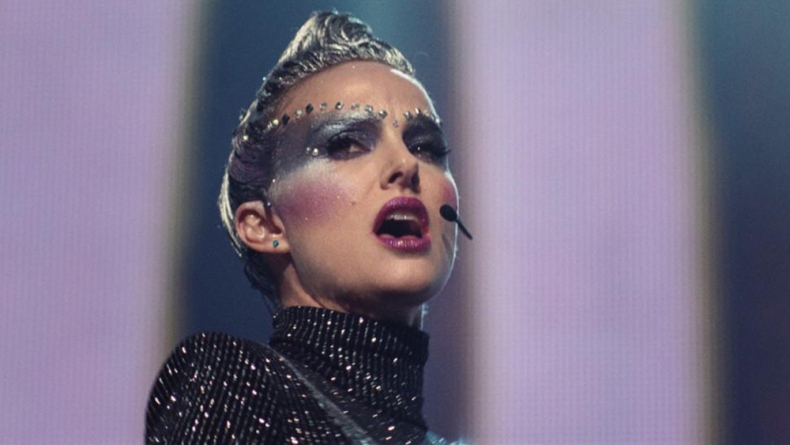 Vox Lux begins with fierce momentum, but ultimately succumbs to its own crushing weight, failing to make good on its vast potential.

In a year where Bradley Cooper’s A Star is Born remake tackles musical fame as a Hollywood throwback tragedy, Brady Corbet’s Vox Lux comes at the problem from an altogether different direction, To Corbet, who also penned the self-serious script, pop stardom is a constant state of crisis, a perpetual martyrdom machine greased with the revelatory tears of listeners and consumers. Split evenly between two disparate but woefully tethered time periods, the film begins with fierce momentum, but ultimately succumbs to its own crushing weight, failing to make good on its vast potential.

Side A takes place at the ass end of the ‘90s just before the turn of the millennium, when reality both looked and felt like the smoldering remnants of a long dead fire. Corbet sets up the story of Celeste Montgomery (Raffey Cassidy) with a shock and awe opening sequence, a startling school shooting that leaves the young woman one of few survivors. As the nation grieves this Columbine-esque tragedy, Celeste and her big sister Ellie write a healing song that takes the country by storm. This unexpected turn of events leads to Celeste getting a record deal, with her and her sister leaving town for a whirlwind new lifestyle with their sleazy manager (a very entertaining Jude Law).

This section moves with great assuredness, so driven by its darkly comic presence and a persistently maudlin approach tempering its inherent absurdity. The curious triangle between Celeste, her older sister and her manager is fascinating if discomfiting. There’s this seamless transition from the blunt, jump scares of the prologue sequence and the severe, foreboding opening credits to the more overtly bizarre pop star plot that makes it difficult to tell how up its own ass this movie is going to go.

On the one hand, there’s the distinct sense that Corbet has something genuine to say about this weird time in the nation’s history and the twin phenomena of mass shooting and post-TRL pop music, but on the other, there’s this feeling of dread that he’s not experienced or gifted enough to execute this vision. The strange blend of Gus Van Sant and Jonathan Demme influences coupled with the heavy-handed style, complete with omniscient Willem Dafoe voice-over narration, could really go either way.

Then Side B kicks in, cutting hard to 2017 where Celeste is all grown up, now played by Natalie Portman, with a teenage daughter of her own, Albertine (also played by Cassidy). Her relationships with The Manager and Ellie (Stacy Martin) are drastically different. Now, she’s a massive star about to tour on her sixth studio album, but Portman’s take on the character is leagues removed from Cassidy’s. This time jump is frustrating both because there’s clearly a lot of fertile ground to explore between the two eras and also Portman is such a jarring presence that it takes multiple scenes to accept that this is really the same protagonist two decades later.

Where the film’s first half feels audacious and vital, off-kilter in all the best ways, its second half settles into a boring and predictable portrait of post-millennial fame, with Celeste’s debauchery and complaints about being in the public eye so rote. In this present day, a different mass shooting affects Celeste’s tour launch, which in turn affects interactions with her inner circle. But rather than draw useful conclusions or even pose any interesting questions, the rest of the movie limps along to a lackluster final performance set piece that nearly pulls it all together, but not quite.

Vox Lux either needs to be leaner and more taut or considerably longer and more epic in scope to function properly. The dichotomy between the two eras feels less purposeful than haphazard. For every laudable stylistic tic Corbet employs, like the surprisingly effective narration, there’s another that proves too distracting to accept. Scott Walker’s original score is suitably haunting and moving, but the Celeste songs Sia provides are hollow in a way that’s meant to support the film’s themes but only serves to make the world less believable. There’s one particular song from Celeste’s early days that sounds exactly like Lorde, an unnecessary anachronism that negatively impacts the otherwise affecting elements of that period’s tone.

Portman delivers a daring performance, but it’s marred by lackluster writing for her half of the feature and a lot of risky choices that lends her turn an odd Nic Cageiness one would not expect. She’s might be the last actress anyone would forecast turning herself into an accidental meme. Vox Lux, despite not sticking the landing, cannot be entirely written off. For all its foibles, there are too many moments with real potency to dismiss it outright. Perhaps this is an important stepping stone in the evolution of Corbet as a filmmaker and in the future, he’ll cull together a project with more profound underpinnings than drawing a squiggly line from Elephant to Britney’s 2006 meltdown. As it stands, the film still deserves praise for the unique way it distills modern American society to a merry-go-round of the give and take between tragedy and sympathy, of sacrifice and idolatry, and the cycles we as a people seem incapable of breaking.