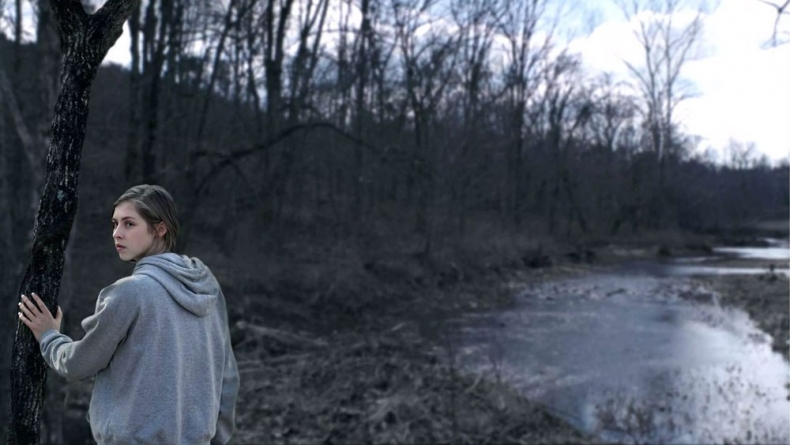 Rust Creek is a vapid, well-worn genre exercise that never really manages to get off the ground.

The protagonist of Jen McGowan’s Rust Creek is so thinly sketched she’s difficult to root for, even as lecherous hillbillies chase her through the woods. Our introduction to Sawyer (Hermione Corfield) consists of watching her run alone on a college track and then listen to an enthusiastic voicemail from a prospective employer. When her GPS inexplicably leads Sawyer to the middle of nowhere and two creepy yokels (Micah Hauptman and Daniel R. Hill) assault her—wounding her leg as she successfully fights them off—we’re presented with languidly paced scenes of Sawyer limping around the forest and blandly rehashing her plight while talking to herself. When Lowell (Jay Paulson), a sympathetic meth cook who’s mixed up with the yokels, hides and protects Sawyer, she can only describe her life to him in terms of the wispy backstory the film opens with: she’s a college student headed to a big interview, and nothing more.

This dearth of character development, combined with the first act’s woefully sluggish pace, dooms Rust Creek from the outset, but this lackluster thriller manages to claw back from complete forgettability as a conspiracy begins to develop. As the local sheriff (Sean O’Bryan) and his deputy (Jeremy Glazer) debate whether to investigate the apparently abandoned SUV from which Sawyer was forced to flee, a rift grows between the two men, which only yawns wider as one appears to have unsavory ties to the offending hillbillies. The film’s meth ring in Appalachia never sniffs the level of intrigue found in TV’s cartel in Albuquerque or the bleakness found in the meth lab-dotted Ozarks of Winter’s Bone, but as McGowan’s film adds more moving parts, it does gain some momentum that the first half sorely lacks. But even then, it’s a case of too little, too late.

The woman-in-peril trope is virtually as old as storytelling itself, with the once ubiquitous and sexist damsel-in-distress approach increasingly giving way to films about women kicking ass. Rust Creek never truly indulges in either extreme; Sawyer capably fights off and then evades her slimy assailants in the film’s first act, but eventually requires safe harbor from Lowell. The film touches upon but then doesn’t engage in any meaningful commentary on sexual assault, drug-related violence and police corruption, merely using the specter of these national blights as boogeymen to be endured by a dimensionless protagonist who is then postured for final-girl status as bodies begin to drop.

The tension that Rust Creek does conjure is derived primarily from the dedicated performance of Hauptman as the sleazy hillbilly henchman Hollister. He oozes menace in his initial roadside interaction with Sawyer as she consults old-fashioned maps when her GPS fails her as well as later in his confrontations with Lowell, whose evasiveness while hiding Sawyer sticks in Hollister’s craw. Other than perhaps the disingenuous sheriff, Hollister is the only dynamic character. Sawyer is merely in survival mode throughout, Lowell’s motivations for protecting her at great peril to himself are never meaningfully developed and a white-hat deputy might be the least believable character of them all. The story only manages to build to an obvious foregone conclusion, making Rust Creek a vapid, well-worn genre exercise that never really manages to get off the ground.