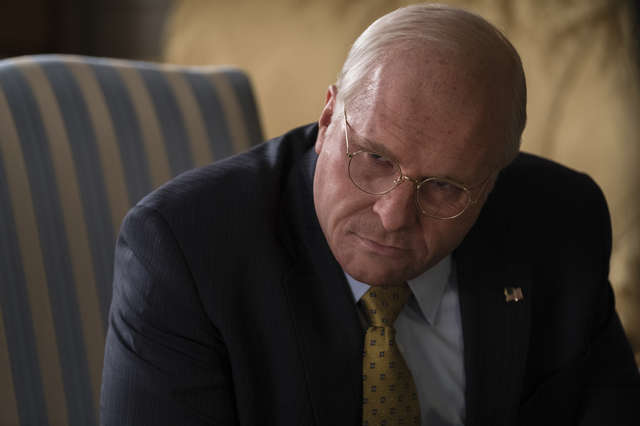 Former Vice President Dick Cheney isn’t a particularly strong candidate for a good biopic, if only because he makes for such an unrelatable and profoundly unlikable protagonist. But rather than try to find some shred of humanity within the ambitious war criminal to make the viewer understand him better, director Adam McKay has made a relentless indictment of the man barely hidden inside a crass comedy, like an hour’s worth of American tragedy meat and cheese nestled at the lukewarm center of a prestige picture Hot Pocket.

Biopics, by and large, are trash movies. To tell someone’s life story well requires either an exhaustive amount of screentime or to narrow the storytelling focus to a specific chapter in that life to best exemplify some theme about that person’s existence. Most biopics settle for dramatizing a wiki’s worth of quotable events and relying on tropes so well worn Walk Hard was able to effortlessly ether them for the length of an entire feature film. Vice does much the same, but for very different reasons. Others employee fuzzy facts for narrative efficiency, where McKay turns truths into cartoons to highlight real life absurdity.

Following in the footsteps of The Big Short, McKay moves away from the improvisational comedy of his Will Ferrell collaborations for a docudrama style conflating the Oscar-bait gravitas of year-end list denizens with the educational infotainment of a YouTube video essay. He stacks his cast to the heavens with heavy hitters, like Christian Bale and Amy Adams as Cheney and his wife Lynne, then repeatedly obfuscates their dynastic ascent with fourth wall breaking comedy asides, utilizing Jesse Plemons as a mysterious narrator to the proceedings.

The Big Short employed these tactics to simplify the ‘08 financial crisis into something easily digestible for a mass audience, but Vice doesn’t have the same density of foreign concepts and complicated jargon to demystify. Where McKay’s last film was high-achieving explainer, this one plays like a fiery lecture, a ranting reminder of just how bad the Bush administration was. Since the film debuted, its many detractors have taken McKay to task for what they consider to be stating the obvious and being more than a little condescending in doing so, but Vice isn’t tailored for anyone walking into this film with the intricacies of the immediate post-9/11 landscape fresh in their memory.

This is a landscape where all it takes is a virally shared .gif of W sliding Michelle Obama some candy at his father’s funeral for people to temporarily vacate their mental faculties and talk up how he wasn’t so bad compared to Trump. Some may watch two straight hours highlighting every shitty thing Dick Cheney has ever done or been remotely connected to and roll their eyes, but to pretend there aren’t massive droves of viewers who could do worse than be reminded of these deeds is disingenuous.

As for McKay’s perceived condescension, it reads less like a guy telling his audience they’re dumb for caring more about The Fast & The Furious than politics and more like a man exorcising his own personal guilt for making over the top comedy flicks while the world was burning around him. It feels like McKay wishes he could go back and time and make movies like The Big Short when he was making Anchorman, which is sad, given how prescient and important those comedies were without trying so hard to be.

The real issue with Vice is the strange feeling the film leave the viewer with. It’s thrilling to watch one of Bale’s absolute best performances as Cheney, here played like a towering supervillain with literally no inner life. Bale has these moments where his face implies some measure of empathy or deeper emotional thought, right before he does something epically despicable for no reason better than a lust for power and some kind of sociopathic brand of manifest destiny. McKay does a solid job of balancing genuine laughs with undeniable moments of tragedy, poking fun a Republican regime with no real ideology save for greed while using harsh editing to draw a clear line to the lives lost as a result of their decision making.

But the film leaves the viewer with a stomach-churning kind of anger. It’s this smoldering frustration, a laugh out loud, black-dark comedy that serves only to reinforce harsh realities we’re still struggling with and fighting against today. It’s a good thing that McKay made this film, but one can’t help but wonder what he hopes will come of it, beyond more empty hand-wringing.