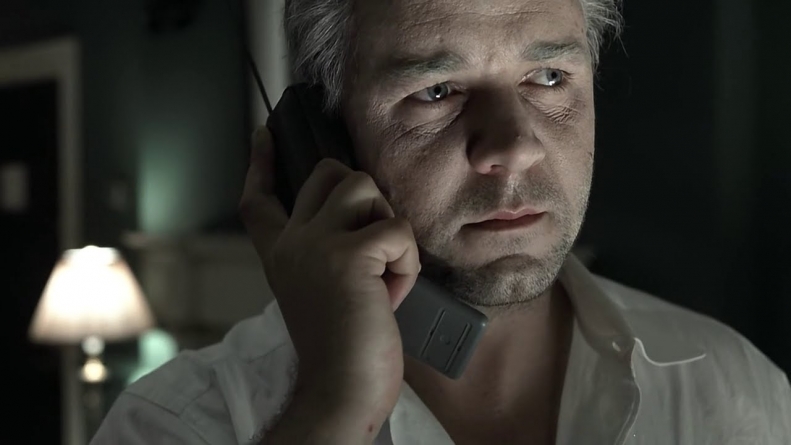 Mann paces The Insider much as he did Heat, maintaining a constant tension even as the narrative stretches into ruminative longueurs.

Michael Mann’s corporate thriller, The Insider, opens in strange fashion. Adhering to the director’s love of instant immersion, the film begins with a blindfolded man being driven through the streets of Baalbek, Lebanon by Hezbollah soldiers. The man, revealed to be “60 Minutes” producer Lowell Bergman (Al Pacino), is escorted to the safehouse of Sheikh Fadlallah (Cliff Curtis) to attempt to convince the leader to grant an interview to Mike Wallace (Christopher Plummer). Yet the powerlessness conveyed by Mann’s claustrophobic shots of Bergman being jostled around in the backseat of an old Soviet jeep and sat in front of Fadlallah immediately evaporates when the journalist talks to the sheikh, answering questions with sardonic wit and refusing to feel intimidated. Later, after the sheikh grants the interview, both Bergman and Wallace stand up to Hezbollah soldiers barking commands in Arabic, the Americans so unmoved by this show of power that the soldiers are caught off-guard.

This radiating confidence contrasts sharply with the introduction of Jeffrey Wigand (Russell Crowe), a newly terminated corporate officer at the Brown & Williamson tobacco company adjusting to unemployment. From the moment Wigand steps into frame he conveys nothing less than constant fear; talking to his wife, Liane (Diane Venora) about his severance benefits, Wigand looks jumpy, starting at any flash of light or noise. When one of his daughters alerts her parents that her sister is having an asthma attack, Wigand bolts to his child without even knowing the problem, so clearly keyed up to expect something grave. Even at a young age, Crowe radiated menace, and he plays up a temperamental side to Wigand that becomes relevant over the course of the film. Yet that undercurrent of buried rage only compounds how unnerving it is to see Wigand so jittery from the start, so cowed by unknown forces.

The source of the man’s paranoia is soon made clear when Bergman contacts him for help as a scientific consultant for a story he is running about tobacco. When the producers call Wigand’s home, Liane answers and immediately says her husband is not interested in talking to press, and when Wigand does actually meet with Bergman, he immediately mentions he has a non-disclosure agreement about his former job. The newsman’s interest now piqued, he prods Wigand just enough until the man, clearly fuming about his termination, lays out that he knows what kind of chemicals are put into cigarettes purely to make them more addictive. Yet even in these preliminary talks, one gets the sense that Wigand’s old bosses are already keeping tabs. He is brought back to Brown & Williamson and presented with an even stricter non-disclosure agreement as the CEO (Michael Gambon) speaks like a mobster as he makes vague but unmistakable threats about Wigand’s severance package and family healthcare. The remainder of the film broadly follows Wigand’s increasingly desperate attempts to whistleblow as legal and even violent threats begin to mount against him from his former employers.

Mann and cinematographer Dante Spinotti shoot the film as an Alan J. Pakula-esque thriller, plunging frames into shadow while swapping out Gordon Willis’ fondness for slivers of bronzed lighting in favor of the colder blue fluorescence for which Mann was known. This adds an extra degree of frosty nervousness to the film, which comes to the fore in disturbing scenes like one in which Wigand goes to a driving range late at night and hits golf balls to unwind, only for the blurred sight of a single other person deep in the background to gradually dominate all attention until Wigand also spots the man and is terrified into leaving. Mann’s films are often overwhelmed by sound, be it gunshots or roaring soundtrack cues, but The Insider can be deathly silent, with the establishment of total power and surveillance achieved through impersonal calling cards of threats, from an email that flashes “We will kill you” against a red background to a bullet left in Wigand’s mailbox.

Mann paces the film much as he did Heat, maintaining a constant tension even as the narrative stretches into ruminative longueurs. Procedural expertise, as ever, is the primary mover of action, but this is one of the few Mann films where the protagonists’ impediments are not mostly of their own making. The existential confusion and self-denying discipline of other Mann characters is replaced by the crushing weight of external forces. For all the threats that swirl around Wigand, this is a story without actual violence, where fights are waged through lawyers and loopholes. Bergman displays his shrewdness in arranging for Wigand to be deposed to circumvent the executive’s non-disclosure agreement, and perhaps the film’s most thrilling moment is that deposition, a humble testimony in a Mississippi courtroom where anti-tobacco attorney Ron Motley (Bruce McGill) delivers a raging monologue as the smug, intimidating industry lawyers. That this show-stopping moment is for a court drama so minor that there is not even a judge present is a testament to the crushing lack of cathartic release in this story, a reminder that someone like Wigand will endure so much and never really know if he is in the clear.

Crucially, the film lacks heroes. Wigand, cagey and easily riled into vindictive behavior, is transparently presented as a man looking to get even rather than do the right thing. Bergman’s dogged interest in journalistic integrity is frequently contrasted with both the corporate intervention of CBS executives and the quisling capitulation of Wallace to the wariness of the suits to air Wigand’s whistleblowing, but the producer himself is frequently shown finding work-arounds to weasel information from those who seek to keep it hidden, and much of his moral grandstanding in the second half of the film stems from his mounting guilt over forcing Wigand way in over his head. Much is made of the film’s stylistic and narrative resemblances to All the President’s Men, yet that film’s starkly established sense of right and wrong is nowhere to be found here. If The Insider resembles any Pakula film, it’s Klute, the two sharing a predilection toward moral and psychological insolubility and a sense that all sides in a conflict are willing to play you as a pawn. Wigand and Bergman “win” by the film’s conclusion, yet both are left more alienated and jaded than when they started, haunted by the realization that their own separate, egotistical quests for truth have only exposed how vulnerable they really are.