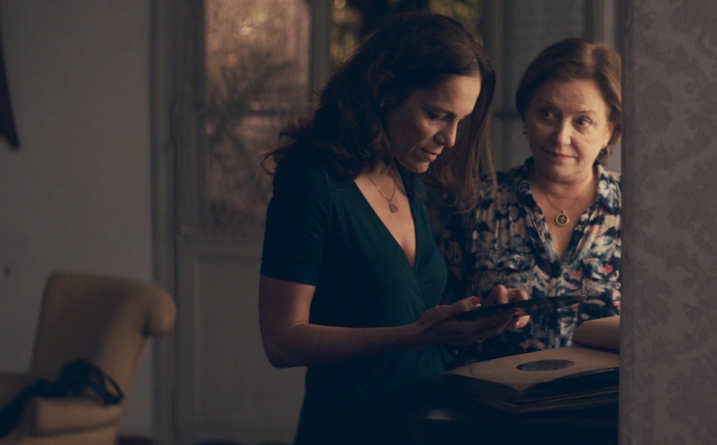 The Heiresses satisfies, albeit with less force than many of its bolder peers.

The Heiresses, the feature debut of Paraguayan writer-direct Marcelo Martinessi, adds a queer spin to big-changes-late-in-life genre. While its slow pace and quiet performances make it a lesser cousin to comparable films like Sebastián Lelio’s 2013 hit Gloria and Andrew Haigh’s brilliant 45 Years, its unique perspective and subtle strength make it a satisfying film, despite Martinessi’s refusal to wring any laughs from a plot that begs for some satire.

Set in the Paraguayan capital city, Asunción, The Heiresses follows shy, 50-ish artist Chela (Ana Brun), who lives with her partner Chiquita (Margarita Irun) in a palatial inherited home. All would be well except for the fact that Chela and Chiquita are out of money, a problem that apparently drove Chiquita to crime as she is about to leave Chela to go to jail. Chela, who has always had help (and still does, as she refuses to fire her maid), finds herself forced to step meekly out into the world.

Opportunity arises when Chela’s neighbor Pituca (María Martins, adding a much-needed shot of humor to the film), fearing kidnapping (background dialogue tells us that Asunción has been suffering from a wave of taxi-related kidnappings), asks Chela to drive her to her bridge game. Through Pituca, the other bridge ladies come to rely on Chela and her old, inherited Mercedes to shuttle them around, and Chela manages to make some money. She also meets the young, sexually-frank Angy (Ana Ivanova), who captures more than just Chela’s eye. Angy is, in many ways, Chela’s opposite, and Chela’s attraction to the younger woman seems to at least partially be an attraction to a life unlived.

Martinessi’s documentarian roots are evident in the naturalistic performances of his actors (many of whom – Brun included – are making their film debuts) and in the graceful but practical camerawork (by cinematographer Luis Armando Arteaga). But it’s hard not to wish for him to dig more deeply into Chela’s life. The fault isn’t with Brun’s powerful, delicately observed performance nor with the fact that her character is prickly and often unlikable, which is actually a benefit. Instead, it is with the fact that the stakes never feel as large as they should, making the film feel even smaller than its intimate aspirations. If Martinessi had taken the opportunity to add a satirical edge or even to spend more time examining Chela and Chiquita’s relationship before their precipitous fall, then perhaps it would be easier to get invested.

That said, the casual queerness of The Heiresses is truly admirable. How wonderful to see a film in which queerness isn’t the major cause of a person’s grief. Though it certainly comes up – this isn’t a fantasy – Chela’s queerness is treated as a part of her rather than something that happened to her, which is the way so many films frame queer lives. This is all the more powerful as it involves an older, private woman – she’s not the living out loud type, yet she still has a story to tell.

The Heiresses picked up a Best Actress prize at the Berlin International Film Festival, and Brun is deserving, as her performance suggests great depths. Yet Martinessi declines to explore those depths in the film, choosing instead to explore what could have been a profound or even comedic scenario with a gloved hand. Still, The Heiresses satisfies, albeit with less force than many of its bolder peers.