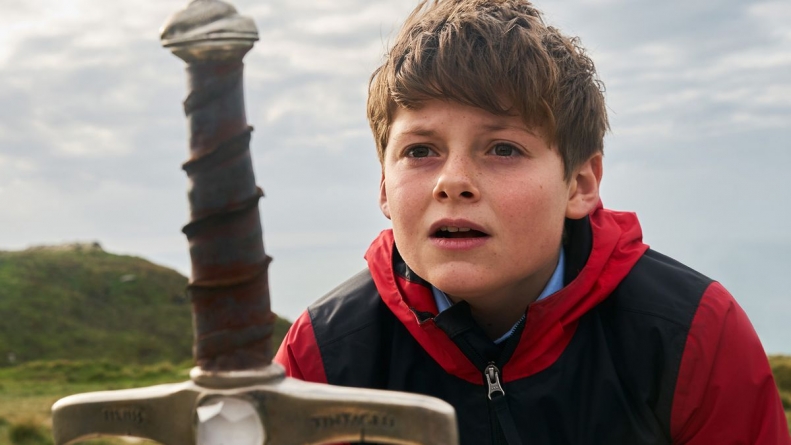 The Kid Who Would Be King addresses how children feel in an increasingly divided world.

The Kid Who Would Be King Mike McClelland

It’s usually a bad sign when a CGI-heavy action film is released in January, the most barren month of the theatrical year. Which makes the quality of Attack the Block director Joe Cornish’s sophomore feature The Kid Who Would Be King all the more surprising. It’s action-packed, funny and it’s also the first good movie concerning the legend of King Arthur since 1981’s Excalibur.

Starring Louis Ashbourne Serkis (son of Gollum himself, Andy Serkis) as Alex, a bullied British youngster. Andy only seems to have one friend at school, the nerdy Betters (Dean Chaumoo), and his home life isn’t much better. Then, while being pursued by frequent tormentors Kaye (Rhianna Dorris) and Lance (Tom Taylor), Alex finds Excalibur itself shoved into a stone in a building zone. He pulls it out, which sets the story in motion. A teenaged version of Merlin (the terrific Angus Imrie) appears and informs Alex that Merlin’s half-sister, the evil Morgana (an underused Rebecca Ferguson) is planning on taking over the world. It turns out that Morgana’s spirit has been waiting for a time when the world has no leader, and Trump’s America and Brexit Britain have convinced her that that time is now.

Alex, with the help of young Merlin and Patrick Stewart’s old Merlin (it’s the same character; he just changes age on occasion), is tasked with forming a new Round Table of knights to battle Morgana and her hordes of computer-generated baddies. The set-up proves to be an effective mash-up of ‘80s kid-led adventure films like The Goonies and Labyrinth and early ‘00s fantasy adaptations such as the Harry Potter series. But Cornish, who showed his wit with Attack the Block and with his more recent screenwriting work, makes the film feel fresh by leaning into the action and also by not being afraid to include pop culture references. Often, in an effort to be timeless, kids’ movies end up stale. That isn’t the case here.

Though the special effects are overused here, the action remains pretty entertaining, thanks in large part to Bill Pope’s zippy cinematography. Many of the outdoor scenes were in Cornwall, which gives film a distinctly British and appropriately windswept Arthurian air. And while the film runs a bit long, things are constantly in motion. Occasional heavy-handed, summary-oriented dialogue makes everything easy to follow (perhaps overly so) and the overall “message” of staying united in the face of evil is consistently woven into the plot rather than tacked on at the end.

The younger actors are all solid and handle the jokes, the action and the dramatic bits comfortably. Imrie is quite the discovery and he’s so good here, embodying the film’s overall youthful wackiness, that you actually miss him when he’s not onscreen. Unfortunately, the script wasn’t as kind to the adults, and the legendary Stewart and the always-excellent Ferguson are given little to do outside of looking bewildered and evil, respectively.

While The Kid Who Would Be King is lighthearted, it also addresses how children feel in an increasingly divided world. The children here aren’t deaf to the malicious back-and-forth of older generations, and Joe Cornish’s script lightly reprimands adults while serving up a hefty dose of hope in how these kids put aside their differences for the betterment of their world. Perhaps the reason recent adaptations of the Arthurian legend weren’t successful is because they chose to focus on the legend of Arthur while minimizing the importance of his Round Table. The Kid Who Would Be King puts it front and center, and the result is a fun and funny film that also uplifts.