If anyone thinks John Waters has calmed down now that he is in his 70s, they are mistaken. At his Christmas shows, the provocateur still talks about elves with giant erections, frozen cum and his disdain for guests shitting in his house. Still, a line exists between the director’s early, underground exploitation films and his more polished later work such as Polyester and Hairspray. Although Pink Flamingos (1972) may be the best-remembered of his initial films, fans typically cite its follow-up, Female Trouble (1974), as their favorite. Featuring a classic performance by Divine as a troubled teen gone bad, Female Trouble remains hilariously shocking 45 years after its release.

Waters, not even 30 years old at the time, shot Female Trouble on a shoestring budget, serving not only as director, but writer, producer, cinematographer and more. And while he didn’t want to ratchet up the shock value of Pink Flamingos, we still see Divine give birth to a baby on a couch and then nonchalantly sever the umbilical cord with his teeth. Yes, Female Trouble is a Waters production through and through, but the film belongs as much to Divine as it does the director. Starring as Dawn Davenport, a delinquent teen who falls hard from grace, Divine commands the screen with filthy grace. Inspired by a mélange of films ranging from the melodramas of Sirk to Fassbinder’s queer distortion of the genre, Waters also made Female Trouble as an homage to the gaudy screen queens of Hollywood films past. 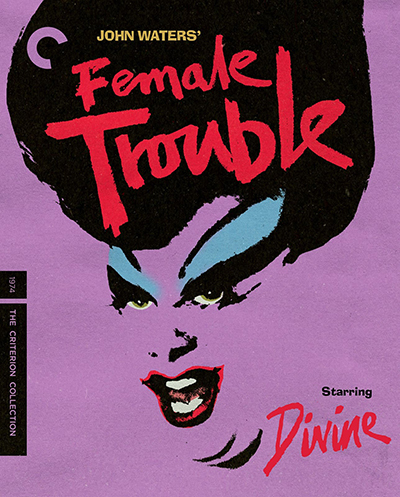 Simply writing down the plot to Female Trouble makes the film sound completely batshit. Set in Waters’ beloved Baltimore, we meet Dawn as she runs away from home and is then raped by a low-life (also played by Divine). Jobless and pregnant, Dawn finds a place of her own and begins rolling drunks for their wallets with a pair of friends. She then marries a hairdresser, gets acid thrown in her face, believes herself a celebrity and is eventually incarcerated and then executed. The film bounces from uneasy comedy to commentary on fame and madness, all the while propelled by Waters’ madcap fearlessness.

An air of manic freedom permeates Female Trouble as Waters utilizes not only his trusty stable of regulars but authentic locations throughout Baltimore. All of his interiors come with garish wallpaper and bright colors. The film celebrates the weirdos, freaks and queers that Hollywood tends to eschew, giving voice to drag queens, experimental artists and the sexual desires of the old and obese that no big shot producer would even dream of putting in a feature film. Where else can viewers see Divine rape himself while wearing a pair of shit-stained underwear? Waters also pokes fun at sacred cows and vomits over-the-line political incorrectness as everything from abortion to corporal punishment is open game for his skewed lens.

Long before being gay was en vogue or celebrated on screen (and a decade before the guy buddy character was even considered acceptable in a movie such as Mannequin), Waters has a character decry to another: “I’d be so proud if you was a fag. I worry that you’ll work in an office, have children, celebrate wedding anniversaries. The world of heterosexuals is a sick and boring life!” This wholesale rejection of the American heterosexual dream of a family and suburban home may rankle a conservative viewer but that’s Waters’ modus operandi. It’s no accident that Dawn pulls a Christmas tree down on her mother before leaving her home for good.

In many ways, Female Trouble treads the same ground as Network. It is a prescient look at what it means to be famous and what happens when we finally cross the line. Dawn Davenport is no Howard Beale, however. Her fame exists in her own mind. However, she is exploited, like Beale, by others and then cast off when the luster wears off. John Waters and Female Trouble dared audiences to look away in 1974. The fact we can still cringe in 2019 is a testament to the auteur and his work.

There is no nuance, none of the incisive commentary that made “The Daily Show” so integral…