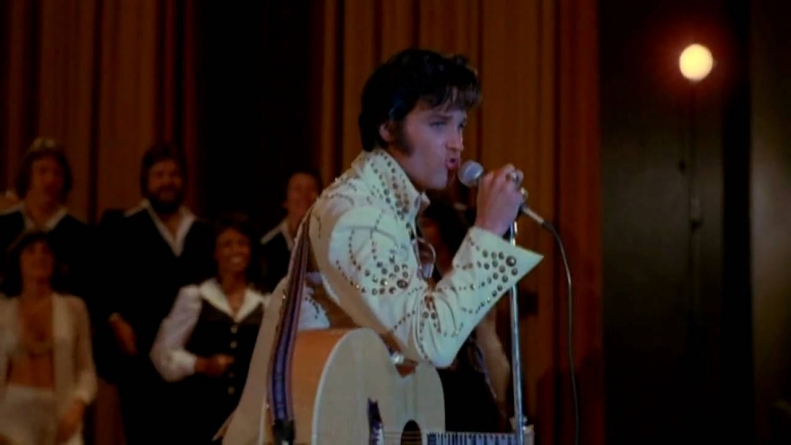 A three-hour dud. Elvis is an outlier at the beginning of Carpenter’s sustained creative peak.

In John Carpenter’s early milestone Halloween, he captured a villain that never dies. For the misguided rush job biopic Elvis, he failed to resurrect the King of Rock ’n‘ Roll. But the TV movie unexpectedly launched a vital partnership.

Elvis Presley died ugly on August 16, 1977. Bloated and obese, the body that laid on the shag carpet in the bathroom at Graceland looked much older than 42, but food and painkillers had become his excesses of choice in mid-life, obfuscating the beauty of his youth. Two months after the headlines declared his death, the world would see the King again in the last of his televised concerts, a staple of event TV programming since his comeback special in 1968. That special had served as a reminder of the power, grace and talent that captivated the postwar Baby Boom generation and made Elvis rock ‘n’ roll royalty, but the concert CBS aired two months after Presley’s death offered up a caricature. Mumbling and drenched in sweat, the last image of the King would come to be known as “Fat Elvis,” a tarnished idol that robbed a generation of the nostalgia it craved and replaced it with the dread of mortality.

Dick Clark, media mogul and host of “American Bandstand,” was not in the business of selling mortality. He sold rock ‘n’ roll dreams and was not about to see a potent figure of mythological pop remembered in a less than pristine manner. While tabloids ran conspiracy theories and Elvis sightings, Clark went about resurrecting the image of the King through the same medium that had sullied it: TV. Production began on Elvis, a three-hour biopic slated for ABC’s “Sunday Night Movie” in February 1979. This would not be an in-depth examination of the man. Clark wanted hagiography and big ratings and got them both. Network television still dominated the entertainment industry in the ‘70s, meaning a virtual captive audience of millions watched the film when it premiered.

From the moment it aired, Elvis was a mediocre undertaking rife with clichés and the kinds of lies a culture tells itself to accept the difficult realities of the heroes it creates. Yet this inauspicious product was the first collaboration from one of the great unsung director-actor partnerships of the next decade: John Carpenter and Kurt Russell. Neither were known commodities at the time, but together they made something bearable what would have been unwatchable if fate had taken their talents elsewhere.

Carpenter had garnered some cult status with Assault on Precinct 13, but nothing on his filmography screamed future helmer of a major television production. Opportunity knocked in typical Hollywood fashion. Carpenter was on a list of potential directors and everyone above him passed. Like most of his generation, he loved Elvis, wanted to do something for the King and agreed with Clark’s intentions. He would need all his multi-genre expertise to direct Elvis, which featured tropes of supernatural thrillers, horror films, soap operas, dramas, fairy tales and biography all sewn together like a certain famous monster.

Elvis begins like a thriller as a motorcade drives through a desert while an Elvis song plays. Its destination: The International Hotel in Las Vegas on the day of Elvis’ big comeback. Dark and carpeted from floor to ceiling, Carpenter shoots the International like a tacky Overlook. There are ominous conversations about a potential assassin until Elvis’ lifelong friend and body guard, Red West (Robert Gray), enters the suite to find Presley (Russell), isolated and watching television. A western has his attention, but when the program shifts to the news at the top of the hour and Elvis is the subject, he removes a gold and white pistol from beneath his gold and white cape and shoots the television set. It’s a clever announcement of the film’s mission to rehabilitate Presley’s image.

Carpenter shatters the last image the nation saw of Elvis on the news and replaces it with Russell’s magnetic take on his generation’s idol. It’s a shame that the cleverness ends with that bullet-riddled television.

The film fades into a horror story in flashback. Elvis had a twin brother, Jesse Garon, who died, a loss that undoubtedly haunted the Presley family, but one that Carpenter and company exploit for effect. Jess Garon is Elvis’ lifelong confidant, whom the King entrusts with his fears and secrets. They speak in reflective water and in shadow. People think Elvis is crazy, all except his mother (Shelly Winters in a forgettable turn). She begins to hear her lost son, too, before her life comes to a sudden close. Right before you think you’re watching a movie called The Haunting of Jesse Garon, the sequence abruptly ends with Elvis’ core relationships and love of music firmly established.

What follows is standard biopic fare. Elvis in high school, in love, trying to make ends meet while pursuing his dream of being an entertainer and, finally, his big break at Sun Records. There’s the rise, the setbacks, the military, the movies and, of course, Priscilla (Season Hubley). Anthony Lawrence’s script goes to great pains to portray Presley as ever the good guy, though often misunderstood. He is never inappropriate and his rages are caused by external pressures, making them justifiable in the logic of the time.

Russell’s extraordinary commitment to his role keeps the whole enterprise from collapse and parody, and Carpenter pulls off the occasional visual stunner as a reminder of the talent behind this staid affair. By the second hour the visual motifs have been established, all having to do with Elvis, his loneliness and near supernatural connection to his music and his brother. Cravings for something, anything more are satiated by glimpses of a shot or sequence Carpenter will repeat in his less arduous work, but this is a three-hour dud. Elvis may have been the king, but Elvis is an outlier at the beginning of Carpenter’s sustained creative peak.