September 21, 2020
Home Features Revisit: A Matter of Life and Death

Which title do you prefer? After debuting in England as A Matter of Life and Death, American moviegoers bought tickets to Stairway to Heaven, the safer name for Michael Powell and Emeric Pressburger’s 1946 film. Though the directors did not like this new name, they begrudgingly understood why any audience coming out from the black hand of World War II wouldn’t want to see a movie with the word “death” in the title.

It’s an interesting conundrum for a film where its protagonist is literally fighting for his life in front of a jury made up of people angry at the British Empire. With the war subsiding and the common enemy of the Axis powers receding, many feared that animosity would again flare between Great Britain and the United States. Tasked by the Ministry of Information’s film commission to craft a movie that showed just how much the British and Americans loved one another, Powell and Pressburger opted for a plot that truly defies description, even more than 70 years later.

Perhaps filmmakers in both countries were thinking of the afterlife during this epoch. In many ways, the premise of A Matter of Life and Death is similar to It’s a Wonderful Life, Frank Capra’s 1946 film that bowed at the same time. Both films begin with a spiritual view of the universe, a “heaven” of sorts inhabited by angels. Both films are about men who, in some ways, must choose between worlds. Just as James Stewart shouts, “I want to live again” in It’s a Wonderful Life, David Niven’s protagonist desperately wants to stay on planet Earth, as well. 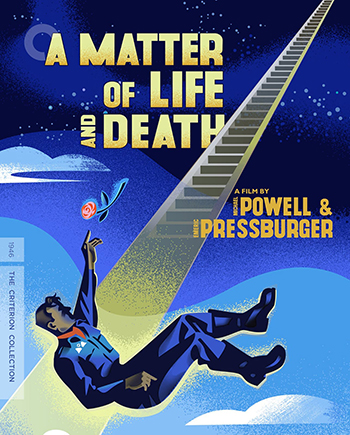 When A Matter of Life and Death begins, we meet Royal Air Force pilot Peter Carter (Niven) in some very dire straits. His plane is on fire. His crew has either bailed out or died. Carter has no functioning parachute either. When he radios in to broadcast his last words, Carter speaks with June (Kim Hunter), an American radio operator stationed in the UK. He quotes some Sir Walter Raleigh and declares that, rather than go down with his plane, he is planning to bail out without a parachute. Somehow, Carter survives and when he finds June, they fall in love. But not everything is perfect or safe for the new couple.

Powell and Pressburger then turn their lens to the metaphysical. We learn that the afterlife is an orderly and peaceful realm where people, once they get their wings, can watch over the affairs on Earth. One of Carter’s crewmates who did not survive the mission awaits his friend. According to the roll book, Carter was meant to perish. Rather than let him continue on living, Conductor 71 (Marius Goring), a French dandy who was executed during the French Revolution, is sent to Earth to claim the AWOL spirit. However, the previously suicidal Carter refuses to go with him, deeply in love with June and happy.

The film alternates between color for its earthbound segments and black and white for its heavenly moments. And in a meta instant, Conductor 71 quips, “Ah, how one is starved for Technicolor up there.” Moments like this help Powell and Pressburger even out the seriousness of A Matter of Life and Death with some playful moments. Rounding out the cast is Powell-Pressburger frequent collaborator Roger Livesey as the doctor who takes an interest in Carter. While the airman complains of hallucinations, the doctor believes that he may suffering from some cranial injury.

But what of that stairway in the film’s title? At one point, the Conductor whisks Carter to the astral plane and explains that he must choose someone to represent him in court battle over whether he can stay on Earth or not. The prosecution is going with Abraham Farlan (Raymond Massey), the first American killed in the Revolutionary War. Farlan hates the British and hates even more that an American girl such as June can love an Englishman. The Conductor and Carter sit on a giant stairway as it ascends past giant statues of great men such as Lincoln, Plato and Muhammad, Carter claims that he wants someone who understands modern issues to lead his defense. But who?

Though some of A Matter of Life and Death has not aged well, it still stands with It’s a Wonderful Life as ambitious for the 1940s. It is Powell and Pressburger’s last film in a series of wartime classics before they jumped headfirst into the very tonally different Black Narcissus (1947) and The Red Shoes (1948).

Ultimately, the directors made a film that turns its back on the horrors of war and opens its arms to love. Besides, is there a force in this universe more powerful than life? Powell and Pressburger certainly didn’t think so when making A Matter of Life and Death.