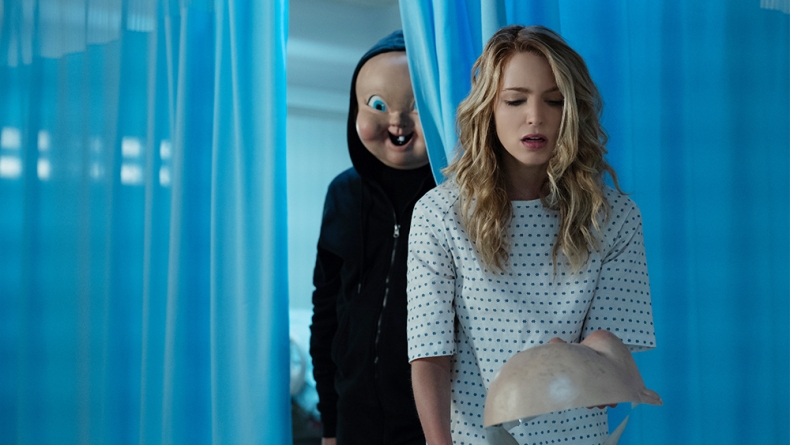 2017’s surprise hit Happy Death Day was a laugh-out-loud funny and, at times, genuinely scary horror comedy that did a particularly good job of selling its Groundhog Day-style premise. And while that premise was a good one, the film also required a creepy killer (Babyface) and an appealing star (Jessica Rothe) in order to really click. With most of the original team back for Happy Death Day 2U, returning director Christopher Landon takes over scripting duties here.

The plot follows Tree (Rothe), her boyfriend Carter (Israel Broussard) and Carter’s roommate Ryan (Phi Vu) as they try to figure out why the death day time loop has reappeared, this time sweeping Ryan into the action. Tree discovers that the horrors from the first film were caused by a malfunctioning quantum reactor that Ryan is working on with Dre (Sarah Yarkin) and Samar (Suraj Sharma). With the quantum reactor on the fritz, Tree is thrown into a slightly different dimension, allowing characters from the first film – even dead ones – to return, though their relationships to each other and to Tree have been scrambled.

Horror comedy is a hard subgenre to pull off, because writers and directors who excel at either comedy or horror are seldom wired to deliver on the other. Landon proves himself to be much more of a comedic tactician, and is obviously more enamored with these characters and their time-loops than with chills. While Happy Death Day 2U doubles down on the sci-fi elements and gives Rothe even more time to shine, he sidelines the Babyface killer and even returns to some of the original’s horror elements in to lessen and in some cases completely undo their impact.

Luckily, Rothe’s Tree is still very funny and still dies in a number of wildly creative ways. 2U’s requisite death montage rivals Groundhog Day’s for laughs and surpasses it in creativity, and Rothe squeezes laughs out of even the most painful deaths. In fact, though the entire cast does a fine job, the film works best when it remains planted on the expressive Rothe, who not only earns laugh but can firmly anchor a dramatic scene. She’s also good at playing scared, though the film only has one scene in which she’s really tasked with terror.

Happy Death Day showed how well producer Jason Blum’s model of bold, low-cost horror can pay off, and kudos to him for sticking with most of the team that made the first film such a success. But 2U perhaps shows why there wasn’t a sequel to Groundhog Day, as the premise can only do so much. In fact, efforts to expand and explain the original’s time loop undermine much of the concept’s mystery—and unraveling of the new Babyface killer isn’t given the attention or characterization it requires.

That said, the energy, the laughs Rothe’s excellent performance are enough to make Happy Death Day 2U worth the price of admission, and it excels as a dark comedy, particularly when Rothe is given the full spotlight. However, the suspense built around the first film’s relentless Babyface killer have been abandoned in favor of a plot that gets less from a lot more. Hopefully the inevitable third film (stay for the credits) will find a way to return some horror to the series.