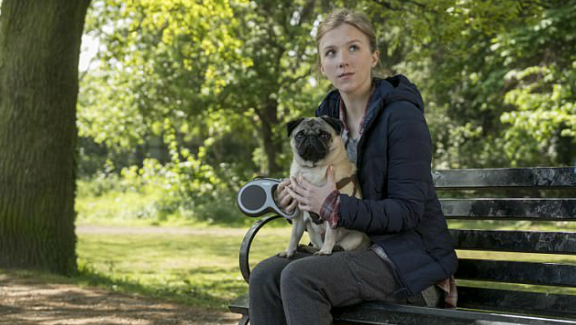 W.C. Fields once said that you should never work with children or animals. Patrick proves him half right.

When the credits finish rolling on Patrick, the latest feature from Mandie Fletcher, veteran director of British comedy, you will find yourself questioning the last 90 minutes of your life. None of the promotional materials state that the film is a parody of romantic comedies, yet the opening ten minutes feel like a short on Funny or Die titled No Weddings and a Funeral, there’s a lazy attempt at using Jane Eyre as a foundation the way Bridget Jones’ Diary used Pride and Prejudice and then there’s the dog, Patrick, the pug of the title. He is such an awful dog that you will not help but wonder if the film commits to performing a public service, deprogramming its audience from gushing over cute things. Then you will remember that you cried at the climax, and the questions will cease. There’s nothing subversive about this flick. It was built to be gushed at, but don’t hate yourself. The climax is very sweet.

The movie stars Beattie Edmondson as Sarah Francis, an adorkable 20-something whose life falls apart in three minutes of screen time. Edmondson is the daughter of Jennifer Saunders, star and creator of Absolutely Fabulous who cameos here as Maureen, the high school chef, and casts a specter over her daughter’s comic vehicle. Absolutely Fabulous was a bawdy, comic spectacle, and Patrick attempts to match that energy throughout its first act, replacing the excesses of fashion, drugs and alcohol with the relationship between a manic animal and the young woman who inherits him. The results are about the same. Misunderstandings abound, situations quickly turn for the worst, sleeplessness becomes routine and all the furniture ends up destroyed in the morning. But, learning life lessons is the real drug here, and the happy ending the diminishing high of this impure product.

Dogs are horrible. That’s the point of it all. Well, not really. Pugs are horrible when they are layered onto an already trite movie to add a level of schmaltz that a story about awoman who gets dumped by the boyfriend she just moved in with days before she’s about to start her new job as a high school English teacher who has to navigate the low expectations of her parents, her manic pixieness and the fact that there’s no way she could afford an apartment in London that size on a teacher’s salary to learn to stand up for herself and love again just doesn’t need. Sarah Francis requires no wagging prop to inspire the kids. She has the classics. She has Bronte. Sadly, grandma died during the opening montage timed to “Everlasting Love” and bequeathed her spoiled pug to her favorite granddaughter, so we all have to endure Patrick.

That opening and the subsequent act offer lessons in a film searching for a tone and temperament. If the intention was to bludgeon us with a small dog’s energy, the effect is more like “Adderall addicted teen on sugar high and meth.” It is off-putting. Eventually the dog recedes into the background of Sarah’s life, establishing a less painful pace as we navigate her troubles at her new job, a date with the local vet (Ed Skrein of Deadpool and Game of Thrones fame) and a mysterious fellow from the dog park named Ben (Tom Bennett), who has a secret that is so momentous it will make you shrug when revealed.

Familiarity breeds a willingness to go for the ride while Sarah regains her self-respect and inspires her students. The whole second act devotes itself to her growth and Edmondson turns out to be a very likeable performer when not acting like she’s trying to catch the Road Runner but her jetpack exploded. Then that damn dog becomes a plot device returning to the fore, again ruining the mediocre romantic comedy before your eyes. Besides her mother and Skrein, Edmondson gets fine support from Adrian Scarborough, Peter Davidson and Gemma Jones, but the movie fails her. There’s just no escaping this clichéd pastiche written by Vanessa Davies, Paul de Vos and the film’s director. W.C. Fields once said that you should never work with children or animals. Patrick proves him half right.