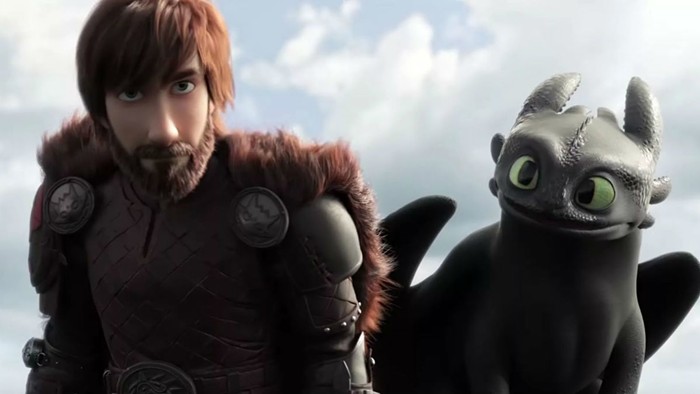 Does not end the series with the roar it deserves.

How to Train Your Dragon: The Hidden World Mike McClelland

The ingenuity when it comes to dragon design and even world design unfortunately isn’t matched in the script, which unwisely borrows from lesser sequels like The Lost World: Jurassic Park and Pirates of the Caribbean: At World’s End. Perhaps writer-director Dean DeBlois (who co-wrote and co-directed the first film before taking over the second) felt the pressure to differentiate the film from its predecessors.

Unfortunately, in doing that, he’s diminished from the series’ key dynamic, which is the friendship between human protagonist Hiccup (voiced by Jay Baruchel) and his dragon BFF, Toothless. Much of the plot still hinges on their relationship, but the relationship’s purpose here is largely to add tension (and tug heartstrings) rather than celebrate their odd dynamic. And the Viking humor, used so well in the first two films, falls flat here, largely because the jokes are often recycled or continued from the prior films.

The series, which has gone its own way after initially being adapted from Cressida Cowell’s book series, has followed Hiccup and Toothless from youngsters to near adults and now finds them as full-fledged grown-ups.

While there was a five-year gap between the events of the first two films, only a year has passed since the events of How to Train Your Dragon 2. Hiccup, the primary architect of a thriving colony where humans and dragons exist in Harmony, is now the leader of his people. Everything is going pretty well until Toothless, a rare Night Fury dragon, comes across a pale lady dragon version of himself (named a “Light Fury” by Hiccup’s human bestie/love interest Astrid). Their meeting calls back to Hiccup and Toothless’s meeting in the first film, yet also brings in dashes of Simba and Nala’s reunion in The Lion King. It’s a beautiful scene, but it brings the dragon-hating Grimmel the Grisly into the picture. The one-note Grimmel (voiced with menace by F. Murray Abraham) is set on killing all of the dragons, and is using the Light Fury as bait. Chaos ensues, and soon Hiccup is leading his people and dragons on a quest find the titular Hidden World, a mythic dragon Eden that may or may not exist.

The visuals never disappoint and scenes of the Hidden World (spoiler alert: it exists!) in particular are simply a delight to behold. And there is genuine emotion in the story, particularly for those who have been with the series for its nearly decade-long lifespan. But it is disappointing that a film bursting with so much creativity can’t break the mold in terms of its story, particularly after How to Train Your Dragon 2 managed to throw several unexpected twists at the conventional animated sequel formula. There does still feel like there is a lot more to see in the How to Train Your Dragon universe. While the ending here serves as an adequate trilogy capper, the fact that the door is left open for a sequel leaves hope that there might be another How to Train Your Dragon someday, one that ends the series with the roar it deserves.