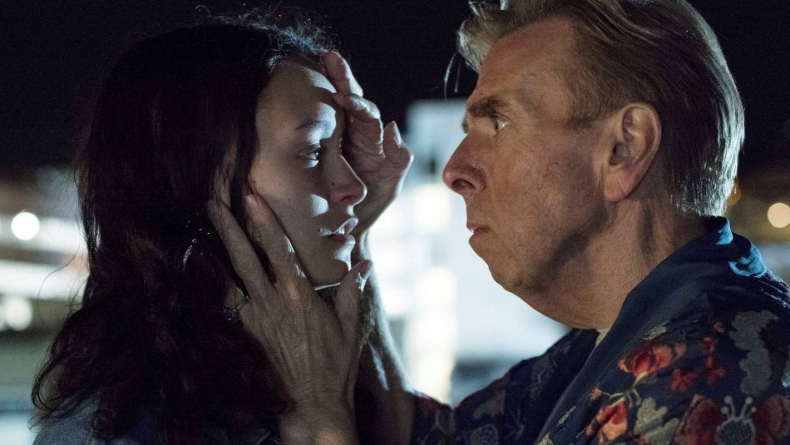 Another in a long line of horror movies that couldn’t conquer its own monsters.

The Changeover intrigues in the first frame of 16-year-old Laura Chant (Erana James) spinning on a roundabout powered by the revving wheel of a motorbike. She and her friend spin faster and faster until Laura loses her grip and flies to the ground. Sadly, the momentary tension of whether the fall has broken her provides the height of suspense in a supernatural thriller that falls flat despite having every advantage.

Based on the acclaimed book by New Zealand author Margaret Mahy, directors Stuart McKenzie and Miranda Harcourt use the city of Christchurch as their setting. Christchurch remains scarred by the earthquake that ravaged it in 2011, and that jagged recovery provides frightening set dressing for this story of witches and monsters. McKenzie and Harcourt take full advantage of a fractured cityscape where a normal looking street leads to a sudden canal formed in a broken roadway. Cargo containers litter the place, creating an industrial menace ready to swallow its victims. The granite and the shadows get exploited to full effect as the directors guide us through their grainy, handheld vision. Visually, The Changeover has all the atmosphere it needs. Its issues lie more with McKenzie’s script.

The relationship between Laura Chant and Sorenson Carlisle (Nicholas Galitzine) will muster memories of Twilight due in part to the shades of Stewart and Pattinson in its two leads. It is the story of Laura’s journey from seemingly normal teenager to witch, with Sorenson as her handsome guide. The thing is, Laura is not quite normal, being what the witches call a “sensitive.” Laura has premonitions, the strongest coming on the day off-screen when her father committed suicide and at the beginning of the film when she feels her little brother, Jacko (Benji Purchase), is in danger. Her feelings are realized when Jacko wanders into a shipping container that has been converted into a ramshackle store of wonders owned by Carmody Braque (a slimmed-downed Timothy Spall as a wiry and fashionable monster).

Braque seems to innocently stamp the back of Jacko’s hand with his own inky image and the boy grows feverish that evening. Laura knows the stamp is the cause, but her mother, Kate (Melanie Lynskey) won’t believe her. Kate finds her daughter’s ramblings about magic too reminiscent of her late husband and takes Jacko to the hospital. The only person who believes Laura is Sorenson, a young man from her school whose practiced aloofness fails to mask his interest in her. He knows there’s something special about Laura and speaks to her telepathically. After Carmody tries to take Jacko again, Laura follows the moon to the home Sorenson shares with his grandmother (Kate Harcourt) and mother (Lucy Lawless). They reveal themselves to be the Carlisle witches and inform Laura that she has a chance to join their coven. Her sensitivity allows for that possibility, but the road to becoming a witch is a dangerous one.

The fact that it never seems so dangerous is the great fault of the script. Laura makes her journey, but it is difficult to discern what is real and what is part of the trance she enters to change over. She moves through time, revealed as the cause of minor distractions in other scenes and eventually traveling to Carmody’s lair. He is a “larva,” a possessor of souls and enjoyer of pain, and self-confidence emerges as the force she needs to defeat the him. That’s a fine message, but the path from sensitive to witch is frustratingly underdeveloped. Instead of growing more invested in Laura’s empowerment, we get distracted by questions about what we are seeing. The Carlisles tell Laura that a sensitive has to climb through fire to become a witch, and what should easily be one of the three highpoints of the drama is so completely underwhelming you can’t help but expect another fire for her to climb through. But there isn’t, and her final conflict extends that sense of disappointment.

This frustration feels so egregious because there’s otherwise so much to like about The Changeover. From the direction and cinematography to the performances, the film radiates with potential. There’s a world where this is the beginning of a great horror franchise imported from New Zealand, but in this world, it is another in a long line of horror movies that couldn’t conquer its own monsters.