Cuba, once the playground for moneyed Americans, has since become an impregnable island just miles south of Florida. Following the Revolution, which saw Fidel Castro’s forces overthrow president Fulgencio Batista in late 1958, visiting the island became no easy feat for US citizens as our own government decided that Cuba is a “terrorist state.” Not many Cuban films have found their way to our shores but one of the most important ones, Tomás Gutiérrez Alea’s Memories of Underdevelopment (1968), has recently been given the all-star treatment by the Criterion Collection for its 50th birthday.

Adapted from the novel Memories by Edmundo Desnoes, Alea’s film is a mélange of New Wave-esque film techniques, documentary footage and first-person commentary on the state of Cuba post-Revolution. We first meet Sergio (Sergio Corrieri) as his wife and parents are fleeing Cuba for Miami. Both an intellectual and bourgeoise, Sergio doesn’t stay behind because he believes in the precepts of the Revolution. Instead, a dull curiosity as to just how Havana will change following the fall of Batista keeps Sergio there. Light-skinned and well-educated, Sergio makes his money off the rent from the apartment building where he occupies the luxurious top floor unit. With no need for a job, Sergio imagines himself a novelist but instead spends most of his time wandering the Havana streets criticizing both the people who support the Revolution and those who have escaped, all the while looking to pick up young women.

Though there is a little in the way of an actual plot, the film’s central story finds Sergio bedding Elena (Daisy Granados), a provincial girl who has come to Havana from a small town to be an actress. Using his mature grace and material possessions such as the view from his apartment and the fancy dresses his wife has left behind, Sergio finally convinces the fickle Elena to support to his desires. He soon grows bored when he realizes Elena has no interest in the highbrow places he takes her such as the art museum and Hemingway’s villa. He is contemptuous of her life, considers her lack of intellectual curiosity “underdeveloped.” Rather than break up with the girl, he simply ghosts her. Eventually, Elena’s family comes to Havana to confront Sergio, claiming Elena is only 16 years and that he has stolen her honor. Rather than force him to marry her, the family has Sergio arrested for rape but he soon beats the charges. 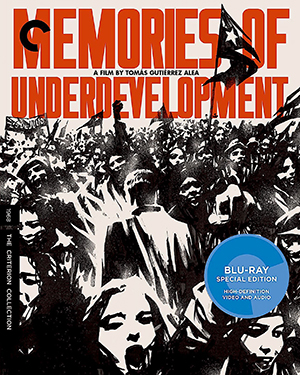 Known by his friends as “Titón,” Gutiérrez Alea studied film in Europe before returning to Cuba to join Castro. Following the Revolution, the director helped establish the Instituto Cubano del Arte e Industria Cinematográfica, an organization dedicated to making films that furthered Castro’s leftist ideals. Though Gutiérrez Alea would go on to direct Strawberry and Chocolate (1990), a film that Robert Redford and Miramax would bring to wide audiences in the United States, Memories of Underdevelopment is considered his masterwork. Though he worked from a script, Gutiérrez Alea improvised, giving the film a free form sensation, imbuing it with a spirit that still scintillates 50 years later.

Memories of Underdevelopment was shot in 1967 but much of the film takes places in the years following Castro’s takeover. Using actual documentary footage, Gutiérrez Alea shows the horror the fighting cast down on the island, much like the terrible scenes in the opening moments of Alain Resnais’ Hiroshima mon amour. However, the Bay of Pigs occurs offscreen as Sergio is more concerned about continuing his posh lifestyle even though we all know that all he owns will soon be confiscated by the state.

Despite its 1968 release, Memories of Underdevelopment did not premiere in the United States until 1972. Gutiérrez Alea was not permitted to enter the country to attend. American critics loved the film. Andrew Sarris even went as far as to interpret the movie as an indictment against Castro’s regime, a claim the director would deny. This sort of interpretation makes sense because Memories of Underdevelopment is a film whose intent can only fully be understood by a Cuban audience in a time and a place that no longer exists.