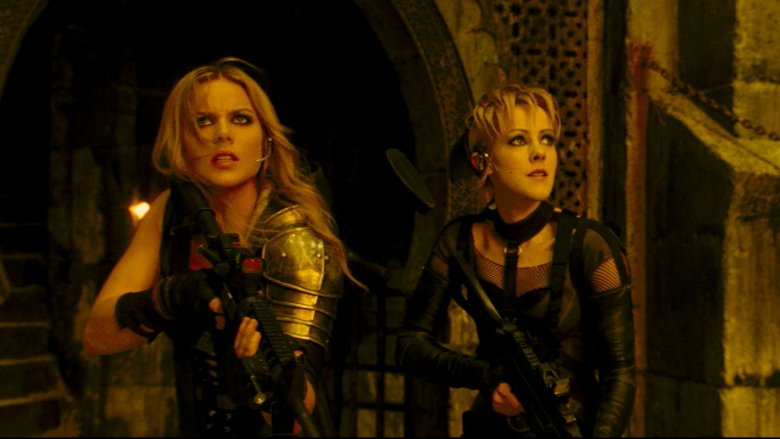 Sucker Punch deserves to be reconsidered, particularly as the problems it addresses largely still exist in big budget Hollywood.

Though it certainly isn’t a perfect movie, 2011’s Sucker Punch gives us a glimpse into the Zack Snyder that could have been had he not been swept into the booming superhero business. Sucker Punch was almost universally maligned upon its release, and the fact that it would so misunderstood has as much to do with Snyder’s résumé up to that point. Because with his prior films, Snyder showed a bulletproof resistance to humor; if there is anything that his breakout effort Dawn of the Dead, his gaming-style Grecian war epic 300 and his board-stiff superhero melodrama Watchmen all had in common, it was their refusal to joke. And while Sucker Punch contains little in the way of laugh-out-loud humor, it is a satirical marvel and one that deserves more appreciation than it has received.

Sucker Punch’s leading ladies are an assortment of tropes, a collection of characters who greatly resemble the female “leads” of action films in the ‘90s and ‘00s. They are scantily clad, they are looking for love, they are great with guns but physically weak, they are brutalized by men but have hearts of gold. Even the names of Sucker Punch’s heroes call out cliché: Babydoll (Emily Browning), Sweet Pea (Abbie Cornish), Rocket (Jena Malone), Blondie (Vanessa Hudgens) and Amber (Jamie Chung). They spend the film fighting against men physically and mentally, and while the multiple layers of reality are confusing at best, the point is clear: these ladies can’t win, even in their imaginations. Whether in a mental hospital, in a brothel or on a futuristic battlefield, the women of blockbuster entertainment are up against insurmountable odds. The fact that Babydoll spends the entire film facing the prospect of a lobotomy is a heavy-handed but pointed metaphor. Smart women aren’t allowed on these screens.

Of course, Sucker Punch wouldn’t be much fun if it was only a metaphor wrapped in special effects. But the action, which jumps from steampunk to war movie to train heist in mob thriller to samurais, is super fun. There is a balls-to-the-wall bombast here that is missing from even the most frenetic of superhero flicks. Yet every victory requires some kind of sacrifice on the part of our heroines, consistently reminding us that women aren’t allowed to win without losing something. These ladies’ pursuit of the five key items that will set them free has the visual appeal and pop cultural knowledge of Ready Player One, but also has the sharp bite of self-awareness.

Though Browning’s Babydoll is purposefully written and performed as a one-dimensional lead, there is a wink-wink-nudge-nudge quality to many of the supporting performances, which also helps Snyder make his point. Because it isn’t as if viewers don’t recognize the plight of women in men’s movies, even the most obtuse cinemagoer knows that female leads rarely, if ever, get the chance to win without losing everything, and that’s if they are even allowed to be a part of the game.

Sucker Punch deserves to be reconsidered, particularly as the problems it addresses largely still exist in big budget Hollywood. For every Wonder Woman and Captain Marvel there are a dozen blockbuster films that fail to introduce a significant female character, and even those that do feel the need to objectify her and/or physically and sexually terrorize her. Sucker Punch’s approach might have all of the subtlety of a runaway train, but its perspective is refreshingly, bravely honest.