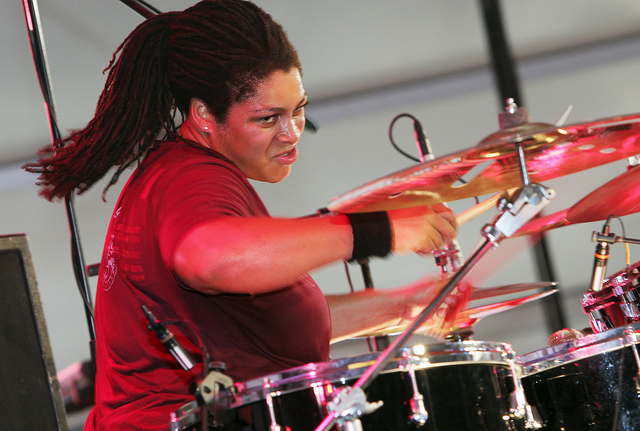 “It’s like, why do you have to ‘earn’ my respect, as if I’m greater than you or something. I’m not the judge or the jury, and people don’t place enough value on the lives of others. It comes down to the golden rule.”

Nikki Glaspie exemplifies the message of the song “We Got the Beat.” A prolific percussionist, Glaspie spent formative years in Boston studying at Berklee and playing at Wally’s Café, a famous jazz club where she performed alongside Andre Ward, Me’Shell Ndgeocello and members of De La Soul and Living Colour just to name a few. Upon graduation, she hit the touring circuit, where she’s kept the beat for Beyoncé, Dumpstaphunk and Chaka Khan, among others. In 2014, Glaspie began touring with her own band, the Nth Power.

Today, she tours all the time, developing a wide network of friends in musical spaces. Bringing many of these friends together, Glaspie started Nikki and the Homies, a monthly jam session at LA’s Mint nightclub. The Homies include musicians from all walks of life, each of them with a remarkable set of accomplishments under their belts. To see them up close and intimate is what sets their performances apart from the hundreds of others that happen in LA every week. I sat down with Glaspie before February’s performance, where we talked about the hustle of touring and what it’s taught her after over a decade in the business.

I saw your Instagram photos from your recent trip. How was Japan?

Dude, it was fucking awesome. I was out there with June Yamagishi, who’s a legend out there. He’s like the first cat to really play funk in Japan and start a funk band. He was in this blues band called West Road Blues Band. June is kinda like the Jeff Beck of Japan. Eric Clapton, Jimmy Page, they always said there was one guy who was better than all of them, and it was Beck. June is like that in Japan.

You went straight from Berklee into touring – what was something unexpected about touring that no one ever told you about before you started?

And that’s the thing, from touring I’ve become an expert at, things people would never think. I know a lot about vehicles because they break down all the time, I’m a travel agent, I know what to look for in hotels and flights. I budget like a mathematician. When you have your own band, it’s a whole thing.

When I tour with my band I have a lot of responsibility. When I’m touring with another band, I’m just another hired gun. So I just look for my per diem like “Where’s the hotel? When’s the next feeding?” *Laughs*.

When it’s my band I’m responsible for everything. I work like 24/7.

How has this industry changed in the years since you joined it?

That’s the thing: my role has changed throughout the time that I’ve been in the industry, but the industry has changed a lot just for the fact that people don’t buy music. When I started music, people bought music. When I started, that was also when Napster came out. After that we realized that we’re not making money off of selling actual music; we have to go out and tour.

So it makes it a little difficult because that’s the only revenue stream for a lot of musicians. It’s very demanding, and people don’t really understand how much time it takes. If somebody calls you for a gig and sends you a list of 10 songs, how many hours does it take to learn 10 songs? Some people are quick, but some people need to sit down with it and chart everything out. That’s hours and hours. After you do that, you have a rehearsal and then the gig, which only pays $100. So it’s like you’re making 10 cents an hour.

How have you adapted to that?

You know, I’ve always been very studious. There’s not a lot of times where people send me a song list and I don’t know the song. I’ve been touring for 15 years and played a lot of music with a lot of people, and there’s a database. *Glaspie motions to her brain*.

I am a stickler for form though. If you know the form of a song, you know the song. It is easier for drummers because we don’t have notes or chords.

How do you choose your lineup for the Homies each month?

It’s pretty much whoever’s here, in LA, on February 19th. I send out feelers seeing who’s around, and people are either “yay” or “nay.”

How have the Homies gigs been going?

Awesome! I work with the Harold Robinson Foundation, so I come out here a lot to work with them. I thought I might as well play a gig once a month.

It’s [really] grown legs. I started this for fun and now it’s turned into this thing. I feel like I gotta keep it going. The first gig that we did, Verdine White showed up. He’s like my hero, and this is on the first gig.

So there is this pressure—though I do put the pressure on myself—to try and make it better every month. Because that is sorta the whole point in life: to get better. Doesn’t matter if I do the same thing today as yesterday; I wanna do it better today than I did yesterday.

Going off of that, how does a master like you practice?

That’s the thing. I’m not actually sitting down at a drum set and playing because I’m always traveling. But I am always listening. I listen in incessantly, to everything, all the time.

Well, right now it’s the music that I’m playing for tonight. It’s Black History Month so I decided to choose songs that were part of the Civil Rights Movement. People sacrificed a lot so that I would be able to play music with white people, Japanese people, Hispanics. People gave up a lot for us to even sit here and have this conversation. I decided that we should celebrate and pay homage to that.

Are you playing anything other than the drums this evening?

Maybe… Oh wait, tonight? No, no, not in public.

So what instruments are you playing in private then?

I play bass, guitar, keys, but I’m not a master at any of those.

I know your parents are both musicians. Do you ever jam together, specifically with your mom with whom you used to play in church?

I mean, when we see each other.

Do you go home often?

Not really, because I’m always touring. I have several homes. Brooklyn I don’t really have a pulse on because I’m touring. It’s just a home base for me. I go to New York to sleep and cook. And I go to shows, which is why I live there. Any given night, I’ll be walking down the street and see Chick Corea is playing, and I’ll just go to the venue.

That’s what drew me to LA. I’m originally from Cleveland, and there’s just less coming through music-wise than the West Coast, though our restaurant scene is amazing.

You know, I actually know that about Cleveland. I can’t remember the name of the place but it used to be a bank.

Oh I know that place – Crop!

What’s your favorite type of venue to play?

One like this. Stadiums are not personal. I can’t look my audience in the eye, and that’s important for me. I like to connect with people; it’s like the whole reason I’m doing this. In a stadium it’s sterile. The first time I played a stadium was crazy, but it was also like I was on an island. It didn’t really matter what I did; they could hear me but they couldn’t see me.

What do you want your fans to know about your work in 2019, or what your goals are?

I have like one big goal: spread love, and to encourage people to love each other more. I think we have a big misconception here that you have to earn respect. I think respect is given. I don’t know you, so I should respect you. You know what I mean?

It’s like, why do you have to “earn” my respect, as if I’m greater than you or something. I’m not the judge or the jury, and people don’t place enough value on the lives of others. It comes down to the golden rule.

Is this outlook shaped by your time in music?

Absolutely! I’m a female drummer, y’know? If I say I play with Beyoncé then it’s like “Oh okay!” But I can’t just be like “I’m a drummer.” People then get all “Well, who have you played with?”

Somebody comes up to me and says they play bass, I’ll tell them “That’s awesome. We should play sometime.”