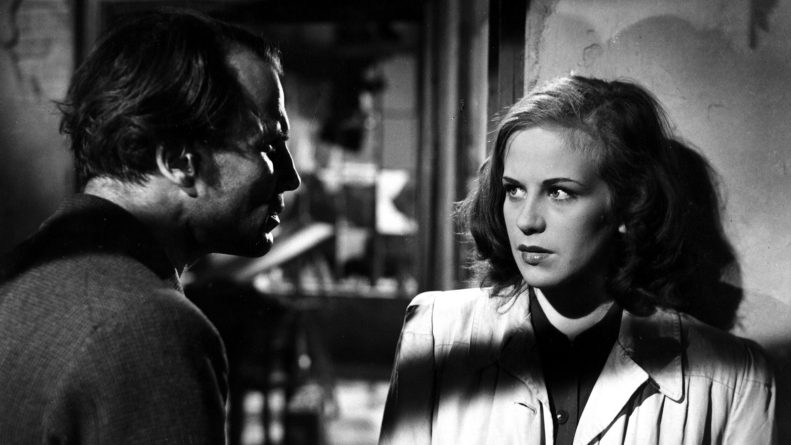 Grief, shame and guilt are states of being that in such cases remain personal but also universal, inspiring work that’s capable of offering a complex artistic reaction to such feelings, no matter the motives behind it.

In the aftermath of World War II, cinematic culture approached the resulting wreckage from a variety of angles, most prominently via films noir, European post-mortem documentaries and neo-realist dramas. These three genres remained largely circumscribed, which is what makes the strange fusion achieved in 1946’s Murderers Among Us so unusual, its immediate response to wartime trauma mixing naturalist tragedy with gauzy romantic melodrama, the thin narrative burnished with a flashy expressionistic gloss. Shot partially on location in a ruined Berlin, with interior scenes playing out on exaggerated sets, it attempts a realistic portrayal that also accentuates the inherent absurdity of everyday life amid the ruins. In a style that seems to predict Fassbinder’s similarly knotty handlings of the same type of subject matter, the first of the so-called “rubble films” lays out an ornate filigree of grids and shadows, depicting a nested series of prisons within prisons, both figurative and emotional.

The story kicks off with a meet-cute setup whose sweetness is tainted by the circumstances. Susanne Wallner (Hildegard Knef) returns from a stint in a concentration camp, only to discover that her former apartment is now occupied by the dipsomaniac Dr. Hans Mertens (Ernst Wilhelm Borchert), the landlord having presumed her dead. A tussle for control ensues, until he relents and she allows him to stay on the couch, splitting the apartment in two. It’s a compromise that’s nudged into being by both the wretched condition of the flat—marked by a broad wall of latticed windows whose panes have nearly all been blown out—and the fact that many other Berliners are living in even worse surroundings. The compulsory romance is a bit rushed, and Susanne’s state of mind remains underdeveloped in comparison to Hans’, but the film nevertheless functions as a marvelous stylistic exercise and a profound meditation on coping with a variety of different forms of guilt.

It’s difficult to imagine the collective trauma being confronted here, a load Murderers Among Us attempts to process through several metaphorically representative characters. One of these is the landlord Herr Mondschein (Robert Forsch), who keeps hope alive for the survival of his young son, which everyone else has written off as a lost cause. The old man seeks solace from an opportunistic psychic, entering an office which proves German Expressionism alive and well, even after most of its creative proponents had fled the country. In a scene reminiscent of the closing moments from Claire Denis’ recent Let the Sunshine In, the man sits portentously behind a desk dominated by a gigantic obsidian globe, doling out advice that seems motivated less by mercy than financial interest.

Furthering the connection to this abbreviated artistic movement is the fact that the film’s title is drawn from the original name for Fritz Lang’s M, a movie which it bookends nicely, providing the tragic denouement to its tale of incipient isolation and unrest. The largest psychic weight in this case sits at the root of Hans’ self-destructive alcoholism, involving a massacre of Polish civilians he was ordered to oversee during his days as an army officer. He eventually confronts the superior who implicated him in this atrocity, now a successful industrialist with a large family and no qualms about his behavior during the war.

As this violent reckoning approaches, Hans is transfigured into a monstrous version of himself, conveyed as a giant, looming shadow, a shot that directly mirrors the infanticide scene in M, a choice which confirms the film’s uneasiness with the idea of vendetta as a cathartic force. Yet it also recognizes that the pull of vengeance is strong, employing a flipped metaphor in which a cheery Christmas reverie invokes rage rather than healing, a confirmation of the upside-down state of this ruined world, in which those who carried out untold horrors have returned to their old lives, never to be punished. The only recourse is to counter this reality with remembrance, patience and grace, as Hans eventually quiets his demons by tending to the medical needs of those living among the rubble, the apartment’s shattered windows finally covered over with used X-ray plates.

The film’s bracing depiction of what it’s like to persevere in a society infested with war criminals loses a bit of heat with the information that director Wolfgang Staudte was a Nazi collaborator (who also acted in Veit Harlan’s repellent racist exercise Jud Süss), working under the auspices of the new Soviet-backed DEFA studios, later the national production arm of the East German regime. This inspires the question of whether this same movie could have been produced in what would become West Germany, where the scourge of old Nazis holding onto power was an even more instrumental part of the post-war political program. The script was in fact rejected by British, French and American officials, leaving it to function as an article of early Soviet propaganda. Yet rather than dull the impact of Murderers Among Us, this status only further serves to complicate things, pointing out how political exigencies always intersect with the processing of the past. Grief, shame and guilt are states of being that in such cases remain personal but also universal, inspiring work that’s capable of offering a complex artistic reaction to such feelings, no matter the motives behind it.