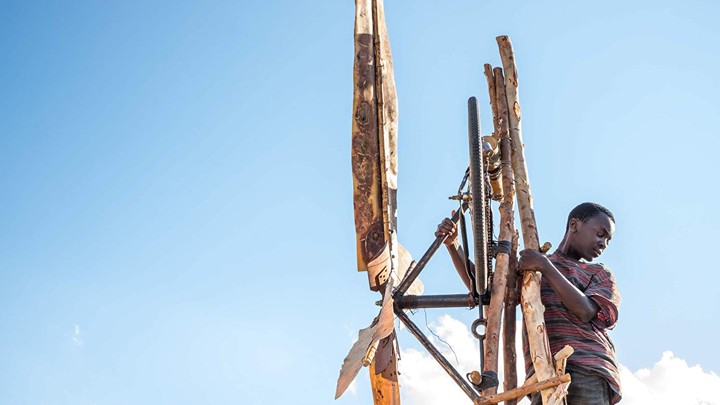 It’s a well-worn tale told better than most, a cut above the rest of Netflix’s ilk and a fine debut for Ejiofor.

The Boy Who Harnessed the Wind Dominic Griffin

Long-lauded for the distinct humanism found in his work as a performer, critically acclaimed actor Chiwetel Ejiofor brings that same sincerity to his directorial debut, The Boy Who Harnessed the Wind. The Sundance favorite comes to Netflix with more emotional depth than the glut of the streaming giant’s usual “original movie” output, but from a structural standpoint, it’s about on par with its peers.

Adapted from the true story of William Kamkwamba (Maxwell Simba), a school boy in Malawi whose ingenuity helped save his village from drought, the film had the potential to be a run-of-the-mill nothingburger of a motion picture, the sort of “ripped from the headlines” family drama Hallmark might churn out. But in execution, Ejiofor’s initial outing as a writer/director is framed more carefully and with more apparent heart than other films in this nebulous genre. Rather than honing all its focus on William and his straightforward arc, Ejiofor takes the time to set the stage surrounding this triumph.

Often, arthouse cinema exploring issues in foreign lands tend to take for granted the specific conditions or complications of these individual societies, so the audience is left with more and more esoteric forms of cinematic poverty tourism, but Ejiofor isn’t interested in such cheap gravitas. By depicting the sociopolitical complexity of life in Kasungu in the early ‘00s, this film patiently lays out a landscape wherein a young boy building a windmill can take on transformative, mythic power.

Ejiofor establishes the depressing intersection between the scarcity of natural resources, the fickleness of Mother Nature and the bureaucratic gridlock. It takes some time to present every possible angle, and certainly contributes to the film feeling overlong and at times, unfocused, but it’s necessary work in making William’s personal story more interesting.

When all the adults and their rigid thinking and convoluted entanglements cannot resolve the issue at hand, William’s science experiments are visually expressed like vignettes from a quirky heist film. They stand out from the otherwise straightforward, open framing of the rest of the film, with artful push-ins and slow zooms utilized to give William’s portion of the tale some youthful idiosyncrasy.

But it isn’t just the dead space between the old guard and a new school of thought that provides the drama here. The larger landscape is important, but the film’s heart comes from William’s family. Each of the interfamilial relationships is given ample room to breathe and grow, between William and his sister, and his mother, but most importantly, his father. Ejiofor himself plays Trywell Kamkwamba, a man who works hard so that his son can have opportunities he did not have.

There’s an amazing little scene early in the film, when William is on his way to this private school his parents are paying for, with brand new clothes. Trywell makes his son perform a test elders asked of children when he was William’s age, to try to touch your right ear by putting your left arm over your head. If your arm isn’t long enough, it means you are not yet old enough for studies. William is more than old enough, but for Trywell it’s a visual representation of the differences in how they grew up.

As the film progresses, and Trywell’s methods not only fail but drive irreparable wedges into his family, as his loved ones starve, the dichotomy between Trywell and William’s approaches to agriculture grows larger than just a difference of technique. William’s ideas represent a son who, as a child, has already surpassed his father. Ejiofor’s performance at this revelation, the quiet way his burns with this painful knowledge, is absolutely heartbreaking.

But once William’s plan works, everyone gets to go home happy. It’s a well-worn tale told better than most, a cut above the rest of Netflix’s ilk and a fine debut for Ejiofor.