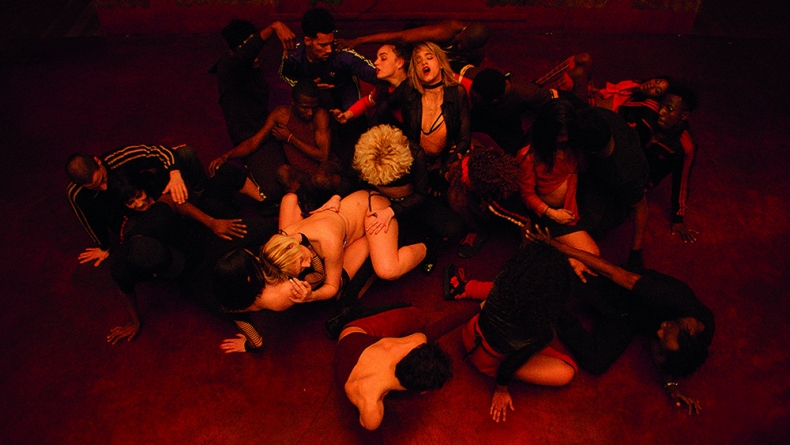 It’s the rare film that wears its influences on its sleeve while carving out a unique place for itself.

The 10 minutes following the cast interviews are an absolute cinematic gift, a beautiful blast of dance and music that feels original despite owing a great deal to drag culture. The action follows a diverse troupe of dancers as they have a rehearsal and celebration at an abandoned school during a winter storm. The music, in one of Noé’s many giallo appropriations, is synthesized and roaring, the colors are bright and the dancers are exceptional. The camera work by frequent Noé collaborator Benoît Debie favors acrobatic tracking shots which serve to show the talent of the dancers while also building tension.

After the initial dancing, the camera splits off into some character development before returning to more (now solo-focused) dancing. In essence, the first half of the film plays out like a long-form music video, filled with mesmerizing choreography and hypnotic music. The increasing abandon with which the dancers attack the floor signals that there is something slightly off, but it isn’t until Psyche (Thea Carla Schott) walks into the middle of the dance floor and urinates that it becomes clear that something is very wrong. It is soon revealed that someone has spiked the sangria with LSD, and it’s too late for anyone to abstain, including one dancer’s young son, Tito (Vince Galliot Cumant). Tito is quickly locked in a closet, and just in time, as the LSD causes the dancers to fall into an endless chasm of sex and violence. Noé is particularly wise to keep the viewer out of the dancers’ heads. Rather than see the effects of the drugs through their eyes, we watch from outside, and the steadily growing strangeness with which the dancers behave is terrifying yet also familiar for anyone who has watched a drunk or high person try to function.

As madness descends, Noé’s camera jumps from character to character, though it eventually settles on Sofia Boutella’s Selva for the majority of the film’s second half, which makes sense as Boutella is the only professional actor involved. With Selva, Boutella gets to shows her gifts in ways that her breakout turns in Kingsman: The Secret Service, Star Trek: Beyond and The Mummy never allowed her to. She holds her own as a dancer, yet it is the moments where she isn’t dancing that she does the most work physically, showing a woman simultaneously in the thrall of hallucinogenic drugs and in the depths of horror. She, like all of the characters, falls into a seemingly primal reverie, hers transforming from beautiful to vicious.

This, however, leads to the most problematic element of the film, which is its attitude towards race. Noé is obviously pointing out with the all of the sex and violence that the LSD has caused the dancers, white and black, to revert to some kind of primitive state. However, as the black characters become increasingly violent – both physically and sexually – it is clear that Noé is doubling down on racist stereotypes rather than upending them. When the black characters start coating themselves in dip from the snack table in a style reminiscent of tribal paint, Climax becomes hard to watch for its downright backwards racial views instead of Noé’s desired taboo horror. While the lighter skin characters get moments of development, the black characters are most often shown as a violent group searching the dancefloor for victims. It’s disappointing and frankly disturbing to see a filmmaker so blatantly display a racist worldview.

If not for this racist undercurrent, Climax could have soared. It’s the rare film that wears its influences on its sleeve while carving out a unique place for itself. Though it owes much to Italian horror, ‘90s musicals and even Hitchcock, it feels fresh, particularly for the horror genre. The choreography is electric and the performances are wild, yet in the end they are nearly overshadowed by offensive stereotypes that add nothing to the story and that insult viewers rather than provoke them.