Somewhere, in an alternate universe, Beyonce isn’t the Knowles sister that the masses gravitate towards. In our reality, Solange – her younger, artier, more soft-spoken sister – will always exist in the shadow of Bey, which is truly criminal; while Beyonce’s talent is still unimpeachable, Solange is simply in a class all her own. A Seat at the Table, her 2016 breakthrough, was a sonic antidote to the sorrow and fury that most of us felt on a constant basis, with lyrics that embraced that rage wholeheartedly. Lines like “Why you gotta be so mad?/ I gotta lot to be mad about” and “And they ask you where you live again/ But you running out of damns to give” were paired with lethargic horn stabs, quietly thudding drum beats, and non-abrasive synths, combining into furious and fiercely Black cocktail party music.

A Seat at the Table is the kind of album that most artists dream of making – meaning the follow up would have massive shoes to fill, to the point where most anything she put out would be a disappointment to many. That she dropped the long awaited When I Get Home – Beyonce-style feels more an exercise in hype control than a way to break the internet, allowing the album to exist without the weight of long pre-release speculation. No matter how good it is, When I Get Home was always going to be subject to that weight – giving it the chance to stand on its own is incredibly important.

When I Get Home’s closest comparison is to Frank Ocean’s Blond, which bucked the relatively straightforward R&B of Channel Orange for lush, experimental spaces. With When I Get Home, the end result is a series of songs that feel like similar but still distinct microclimates, built out of samples that appear and vanish without a moment’s notice. Only five songs here crack the three-minute mark, with just as many coming in under two. Some songs, like “Beltway” and “Time (is),” exist in spaces free of anything one might ever call “a beat,” with the feature reduced to sparse bass tones. Her interludes, which were meals of their own on A Seat at the Table, are turned into tiny snippets, featuring Houstonians like Geto Boys’ Scarface (“Not Screwed!”) and Phylicia Rashad (“S McGregor”) – and while you could miss them if you blink, they make the album feel more like a living, breathing world.

The Solange of 2019 is more committed to “mood” than “structure,” with an end result being many songs that don’t operate as songs, with pieces that often float by without absorption. The interlocking pieces, hazy production, and repetitions (allegedly inspired by Steve Reich, Sun Ra, and Stevie Wonder’s The Secret Life of Plants) provide a challenge for the listener eager to latch on. The patient will be undeterred by that, letting songs like the pitch-shifted opener “Things I Imagined,” dreamy “Stay Flo,” or Black power anthem “Alameda” worm their way into their skulls.

Repetition works its way not just into the sound of the album, but also it’s lyrics, which are often used to a hypnotic effect, with multiple songs based on a single, repeated line, sometimes with minor variations (“Way to the Show”), some just a total repetition (“Things I Imagined” is little else besides the line “I saw things I imagined/ Things I imagined”). Album standout “Alameda” lends itself perfectly to this, with Solange lovingly listing Black traits – “Black skin, black braids/ Black waves, black days/ Black baes, black things/ These are black-owned things/ Black faith still can’t be washed away/ Not even in that Florida water,” she sings while Playboi Carti adlibs in the background.

Unsurprisingly, When I Get Home also hosts a bevy of fantastic guest stars and producers. From Raphael Saadiq and his bass showing up to play while Devin the Dude joins the backup vocals for the Dev Hynes/Earl Sweatshirt co-produced “Dreams,” to Panda Bear popping in to produce “Binz,” there’s talent hiding in every nook and cranny. Pharrell-produced “Alameda” pairs her with The-Dream and Playboi Carti, a team that works well enough that you wonder if there’s anyone that wouldn’t benefit from being on a Solange record. This is also true of the lurching “My Skin My Logo,” which tactically deploys a restrained Gucci Mane in one of his best guest spots in years, as he and Solange rap playfully rap about each other’s tastes – “Gucci on his sheets, Gucci on his feet/ I didn’t want to sock her, she had Gucci on her cleats,” “Solo like to drank, Solo like to ball/ Solo brought the gang, they don’t hold a wall.”

It’s just too early to gauge the impact of When I Get Home. Like the aforementioned Blond, it’s the type of album that takes time to sink its hooks in, cleverly unfurling and exposing its charms to the listener more each time they journey through it. Choosing to make something that sounds so willfully separate from A Seat at the Table was perhaps the only possible route to keep this album from standing in the shadows of its predecessor. She’s never going to be the Beyonce of this timeline, but that’s just fine – she’s the Solange of our timeline, and that’s exactly what we need. 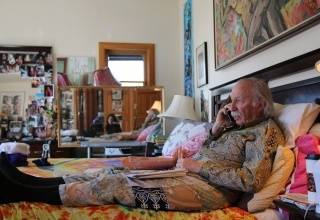