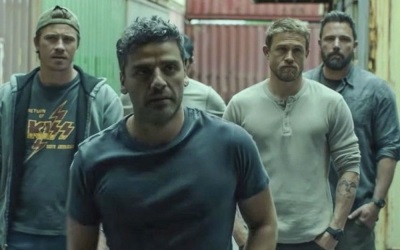 A macho, run-and-gun character study about what happens to the men who fight for this country and its interests when they leave the service and how little they’re compensated relative to the sacrifices they make

On paper, blending the action aesthetics of a war film with the structural functions of a heist thriller should result in a satisfying and flashy genre exercise. But J.C. Chandor’s Triple Frontier, the latest instance of Netflix flexing its studio clout, is more of a morality play than a traditional shoot ‘em up.

The project began its life as a Kathryn Bigelow project, with her frequent writing collaborator Mark Boal handling script duties. The simple logline — a group of ex-military buddies robbing a narco-terrorist — coupled with a laundry list of attached movie star names, like Johnny Depp, Tom Hanks and Mark Wahlberg, meant this should be a big, high-concept blockbuster. But over years, Bigelow and every other name came and went, with Chandor revising the script with Boal to more closely match his principle concerns as a filmmaker.

Rather than a macho, run-and-gun flick filled with explosive set pieces and a clever, twist filled third act about how Our Guys win out, it’s a macho, run-and-gun character study about what happens to the men who fight for this country and its interests when they leave the service and how little they’re compensated relative to the sacrifices they make. Chandor is largely interested in the economic underpinnings of genres, as evidenced in his work on Margin Call and A Most Violent Year. So, it’s a no-brainer for this Michael Mann-lite exploration of gun-toting masculinity to be so focused on the toxic nature of greed.

Triple Frontier is basically two separate movies. The first is a buddy flick about a group of men — played by Oscar Isaac, Ben Affleck, Pedro Pascal, Charlie Hunnam and Garrett Hedlund — coming back together for a common goal, to take down a notorious drug lord and make themselves some money in the process.

Isaac’s Pope is the ringleader, the one who puts the plan together and gets his old gang back together. He has to convince them of this sketchy sounding mission, which only gets sketchier when he shifts gears and suggests they take this guy down solo, without the assistance of the local government they were supposed to collaborate with. It’s an enticing and engaging story that suggests a bunch of likable and captivating men who gave their lives in service of their nation are going to get a real win for a fucking change.

But once they get boots on the ground and feast their eyes on the physical money they’re going to steal, everything falls apart. In most heist movies, clashing personalities and shifting allegiances send a job down the wrong path, but in Triple Frontier, the job itself poisons the men one by one, with Redfly (Affleck), the noblest of the crew, turning the hardest and fastest. He might be the greatest in a recent streak of incredible dirtbag turns from the former Batman, a divorced alcoholic who only feels alive with a gun in his hand, undone by the very sight of the money he’s longed to fix all his problems.

Viewers may be frustrated at the film’s relative lack of action and the somewhat convenient and positive minded conclusion, given how harrowing the second act’s turns are. But Chandor taking the time with these characters, and the cast’s palpable chemistry, makes the tragedy of their own degradation gel well with the hollow catharsis waiting for them in the film’s final scenes.

It’s a bit of a bait and switch, sure, but it’s a compelling one that captures the horrid way capital makes monsters of us all. Triple Frontier wrestles with some complex truths in blunt force fashion, leaving subtlety at the doorstep and giving us a bro-ensemble for the ages to take the journey with.