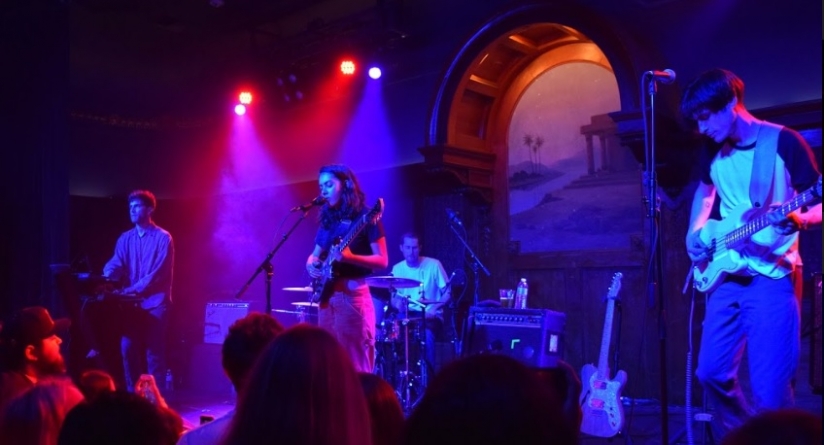 Rather than treat themselves as the main sensory focus, Crumb incorporated the venue’s occult ambiance into their performance.

Of the many music venues in Los Angeles, the Lodge Room stands apart from the rest. Located in a nearly 100-year-old Masonic Temple, the Highland Park space features ornate decorations on its walls and ceiling, and coupled with a hardwood floor, it gives off a warm and cultivated air. Since becoming a music hall less than two years ago, it’s hosted many of music’s finest, from established acts to rising stars, and on Monday night, I witnessed one of the latter, Brooklyn’s Crumb, on the last night of their tour.

A four-piece psychedelic outfit, Crumb plays music designed for lulling, which meant the crowd spent most its time swaying rather than jumping (or my favorite, moshing). Crumb as a band gives off equally warm feelings. When not rocking out alongside her, bassist Jesse Brotter joined Ramani on backing vocals. When not working his synths, Brian Aronow busted out an alto sax, an instrument guaranteed to impress an audience. As a quartet, Crumb felt perfectly constructed and their ease with each other only confirmed this.

“This song is about a curse,” lead singer Lila Ramani announced with little fanfare before slouching into “Jinx,” one of a number of unreleased tracks they performed. It would seem Crumb intends to stay in the game for longer than 15 minutes, even if they seemed completely detached from it all.

Given the nature of psych-pop, Crumb’s moments of apathy suited the Lodge Room. Rather than treat themselves as the main sensory focus, the band incorporated the venue’s occult ambiance (there’s a pentagram on the ceiling illuminated by chandeliers) into their performance. As Ramani hinted in the beginning, Crumb worked enchantments to involve the audience. That magic lies in excellent musicianship, where easygoing percussion, basslines, and piano chords meet in moments of hazy harmony. With music this smooth and this in sync, visuals become secondary, even if it might have been nice to see just a few choreographed sways during “Bones” or “III.”

The sole moment of upbeat energy arrived at the very last minute with the encore, “Fall Down.” After an hour of hazy musical moments, the tempo jolted the audience as if from a spell. For a brief finale, the crowd took the chance to dance their feelings out before Crumb truly vacated the stage. As an effect, the last-minute boost felt intentional – lure in your fans, mesmerize them, and hype them up before sending them on their way. In doing so, an act sticks with listeners as they head further into the night or home to their dreams. Walking out of the venue, you could see by people’s movements that Crumb was still on their minds.