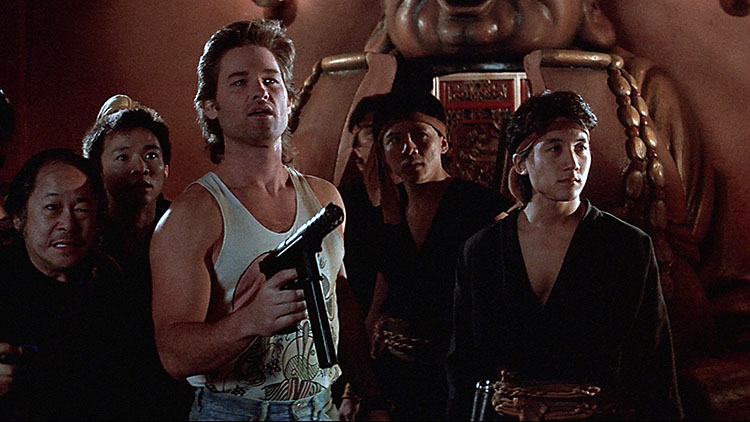 John Carpenter played such an important role in genre filmmaking that it’s difficult to believe that so many of his classics failed with audiences and critics. Big Trouble in Little China continued his streak of unloved movies that would find their due through resurrection on cable and the evolving home video market. What makes the story of this film so different was the powerful force working against it from the initial shine of its green light. It wasn’t the script, a Western converted into a self-described “action-adventure-comedy-kung-fu-ghost-story-monster movie.” Ghosts had been busted, Indiana Jones had found the ark and faced the temple of doom, a DeLorean had travelled through time, so audiences were primed for anything by 1986. No, the force looming over Carpenter was Eddie Murphy.

By quirk of the zeitgeist, two comedies that centered Chinese mythology were headed for a duel at the box office. One was Big Trouble in Little China, Carpenter’s big budget follow-up to Starman. The other was The Golden Child, and it starred Murphy, at the time the biggest box office draw in the world. Rightly fearing Murphy’s prowess, Carpenter rushed his film into production for a July release, beating Murphy to market by six months. Given the films roots as a Western, the director was hoping to cast Clint Eastwood as Jack Burton, the hapless truck driver thrust into a centuries old battle between two Chinese sorcerers in modern day San Francisco. Eastwood was busy, so Carpenter settled for old collaborator Kurt Russell for his lead.

The studio liked Russell, a perennial up-and-comer they believed was just the right vehicle away from stardom. Big Trouble was not that vehicle, and the actor’s considerable charm paled when pitted against Murphy’s. Yet, Big Trouble has evolved into a slow burning phenomenon with rumors of a reboot swirling as Carpenter’s legacy gets mined by a culture hungry for nostalgia. Nobody writes about The Golden Child anymore. A great deal of satisfaction must be derived from seeing one’s vision appreciated for the long haul, because upon its release on Independence Day weekend of 1986, Big Trouble in Little China landed with a thud so loud that no firework or orchestra could hide it. The power of Murphy made The Golden Child one of the year’s big hits.

Deciphering the whims of audiences from decades past is a useless endeavor, but Carpenter deserved better than this drubbing. Big Trouble in Little China is a wildly inventive and anarchical mashup of genres that parodies some of the more popular aspects of blockbuster filmmaking that Hollywood was offering at the time. Jack Burton is one in a long line of big, dumb, muscular heroes that saved the day despite his many deficiencies, a lineage that included the many Stallone and Schwarzenegger films filling multiplexes, and it might have been too early for audiences to laugh at their predilection for this type of hero. The more fantastic elements of the story seem to comment on the Spielberg/Lucas machine that was still in the early years of its industry dominance. Carpenter slow-walks his audience from recognizable reality of airports, restaurants and warehouses to the magical world of Chinatown and the final battle between the evil David Lo Pan (James Hong) and Egg Shen (Victor Wong). Carpenter uses special effects more sparingly and to greater effect than your average movie of the time, illustrating the oversaturation of a tool too often used to fill the plot holes of weak scripts.

Upon re-watching, it’s apparent that the likely reason for the movie’s failure was its sophistication. For a very silly movie, Carpenter worked on a lot of layers to make what he hoped would be a beloved kung-fu movie. In interviews, he is quick to point out his cooption of the typical White savior narrative. A cursory read shows that Jack Burton is the hero of the movie, but, when examined more closely, Wang Chi (Dennis Dun) is the real hero of the movie. He and Jack are thrown together when their green-eyed beauties Miao Yin (Suzee Pai) and Gracie Law (Kim Cattrall) are kidnapped by Lo Pan’s henchmen. Jack is meant to be the sidekick as much in need of saving as any damsel in distress. Unfortunately, that is a very generous reading of any attempt the film made to foreground its Chinese characters. Despite his incompetence, this is still Jack’s story. He may provide the comic relief, but in the end, he saves the day and walks off into the sunset.

Because of the second chances provided by the long tail of the media business, Big Trouble in Little China is duly recognized as a cult classic. It holds up better than most of the films of its era, but one can’t help but wonder if the long road to success didn’t work to the film’s advantage. The Pork Chop Express went on one glorious cinematic ride, unblemished by any sequels that might tarnish it in the collective memory. In many ways, Jack Burton survived a better fate than Indiana Jones and John Rambo. He gets to be iconic while remaining a mystery. Like the man who made him, he paid his dues. The check is in the mail.