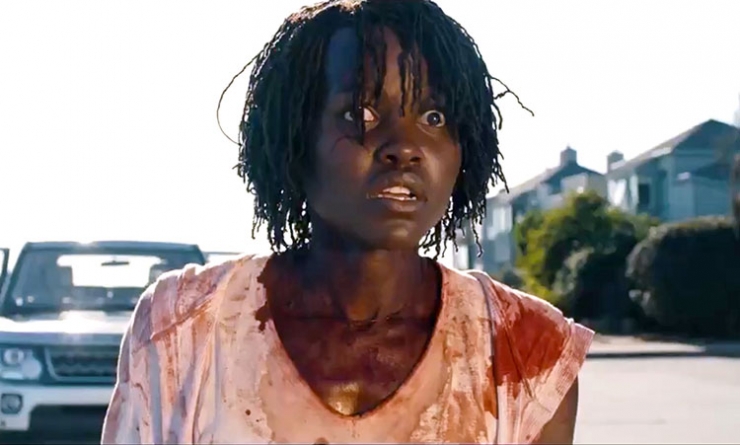 Beyond all the breadcrumbs left for pop culture detectives and thematic obsessives, Peele was just having a lot of fun telling this story.

Though not quite as timely or cohesive as his debut, Jordan Peele’s Us, the hotly anticipated follow-up to Get Out, is an impressive sophomore effort which expands upon the appeal of his prior film without retracing its steps. In the months leading up to its release, Us was beginning to look like it might be little more than diminishing returns and inescapable hype, with a sharply cut trailer that begat overly analytical readings and theorizing in its wake. If the buzz and blatant imagery were anything to go on, there was a tense feeling that Peele may have backed himself into an M. Night Shyamalan-shaped corner, setting up an expectation of what a “Jordan Peele movie” is, which could lead to backlash and immolation.

Luckily, Us sidesteps this conundrum by leading with its simple, existentially terrifying premise and wringing maximum horror thrills from its face value before spiraling into some truly disturbing tangents in the final act. The film takes its time relishing in placating the audience’s expectations just long enough to pull the rug out from under them, sending them tumbling down a cascade of concepts more unsettling than the more visceral thrills that precede them.

For its first half, Us plays out exactly as its trailer suggests it might. Adelaide (Lupita Nyong’o) and Gabe (Winston Duke) take their children, Jason (Evan Alex) and Zora (Shahadi Wright Joseph), on a trip to the beach, where a series of seemingly innocuous coincidences foreshadow a deadly confrontation with a family of twisted doppelgangers, each played with malicious glee by the core cast members.

Outside of the brilliantly staged prologue that sets the tone and mood for the film, the early scenes are less a showcase for Peele’s direction than Get Out provided, as he largely sticks to more straightforward horror scheme that gives his incredible cast room to breathe and work. Duke is a minor comedic revelation as an erstwhile bougie Clark Griswold, and both of the kids do a great deal in a short period of time to feel like believable, lived-in portrayals. But this is Nyong’o’s picture, through and through.

In playing the film’s dueling leads, Adelaide and her “Tethered” opposite number Red, Nyong’o takes every other performance she’s given since reaching the international spotlight and smashes them to bits, accomplishing more here than any of those turns combined. She is fierce, funny, tragic, intense, befuddling and vulnerable, balancing a precarious set of motivations and fears in such a way that certain elements of Peele’s somewhat messy plot manage to function off her emotional honesty alone.

See, while the film starts out as an effective but typical horror exercise, it gives way to something so much more haunting and confounding. Peele has a blast playing the audience, as every scare sequence is designed to turn a crowd of spectators into Monday morning quarterbacks shouting at the screen to tell the unsuspecting protagonists which direction they ought to run. But all that manipulation, all the callbacks, all of the pervasive visual doubling and funhouse mirror imagery never quite congeals with the final act’s revelations.

If Get Out was a perfectly functioning machine that wore its overt symbolism on its sleeve, Us is a purposeful puzzle completely uninterested in being solved. By virtue of its ambition, for Us to stick the landing the way Get Out did would require a lot more than the satisfying arrival of Rod in that cop car. This isn’t one man’s journey out of a horrific labyrinth, but a society’s wrestling with itself on a deeper level.

As such, Us poses questions through its narrative and instead of providing conclusive answers, situates a scaffold of new questions for the audience to pick apart on future viewings and in various subreddits for years to come. In that way, it’s a marked improvement on the populist appeal of its predecessor, but from a pure craft perspective, it’s hard not to feel a little let down in the end. Peele is wrestling with more ideas and themes than before, but he doesn’t pull them together as effectively.

Also, for someone who seemed determined to position Us as a full-on horror film—where his debut still got labeled as comedy—Peele fills this outing with even more laughs, and oddly places them in such close proximity to genuine scares that audience reactions in a packed house will consistently step on expository dialogue or important visual information.

If this was intentional obfuscation to encourage repeat theater visits, kudos on this film’s future box office returns. But perhaps beyond all the breadcrumbs left for pop culture detectives and thematic obsessives, Peele was just having a lot of fun telling this story. Even if Us and its soul-stirring cavern of open-ended debate-bait don’t leave viewers scrawling notes on a chalkboard trying to figure out every nook and mythological cranny, audiences will still probably have a good time watching it.