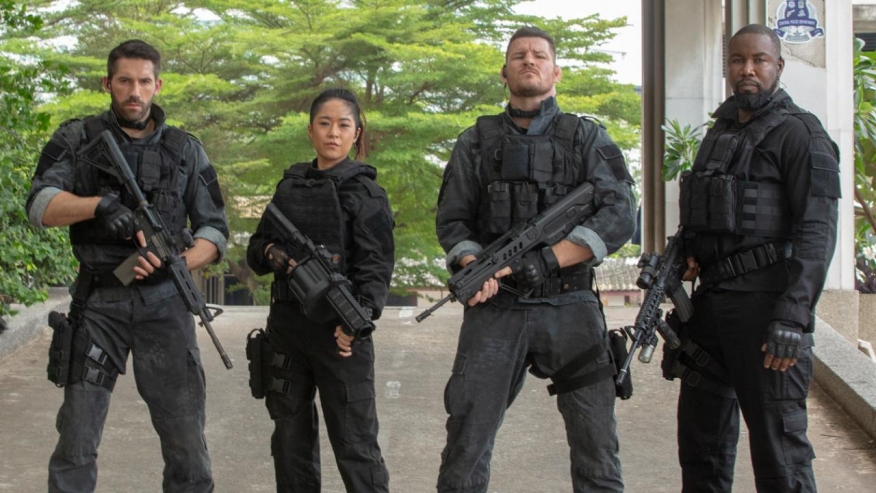 The script gets in the way of an easy win by trying, in vain, to actually be a good movie

With all the (warranted) debate surrounding the WGA’s battle against the agencies of “packaging” practices, it’s easy to forget that on occasion, just shoving the right stars together at the right time can make for an entertaining night at the movies. In the case of Triple Threat, the latest outing from DTV wunderkind Jesse V. Johnson, just getting the three leads into the same room earns a great deal of goodwill from an audience hungry for prestige ass-kicking. Unfortunately, the script gets in the way of an easy win by trying, in vain, to actually be a good movie.

Triple Threat has a convoluted plot about revenge, mercenaries and political entanglements, but none of it feels like it actually matters. This is just one giant excuse to get The Raid’s Iko Uwais, Ong-Bak’s Tony Jaa and The Man from Tai Chi’s Tiger Chen all into the same movie, on the same team, whooping the same asses. That their evil counterparts are played by frequent Johnson collaborators Scott Adkins, Michael Jai White and UFC Middleweight Michael Bisping only doubles down on the bright, neon promise of elite-level kung-fu violence.

But to get to that violence, the movie is overstuffed with unnecessary drama. What should be a simple through-line has entirely too many moving pieces and ancillary characters, murky motivations and questionable plot escalation. For a movie that should be artfully tethering badass fight sequences together for an hour and a half, Triple Threat certainly spends a lot of time subjecting its audience to bland shootouts and copious amounts of People Not Getting Kicked In The Fucking Face.

Luckily, when there is action, it’s beautifully choreographed and competently shot. Johnson, as a director, is fantastic about getting out of the performers’ way and creating legible space for them to work their brutal magic. The cutting is unobtrusive. The pacing is solid. When any of our core six fighters square up, the resulting action is exactly why someone would want to watch a movie like this in the first damn place. It’s the action, stupid!

But what’s really sad is that Uwais, Jaa and Chen each have considerable screen presence and natural ability as actors beyond their considerable combat prowess. It’s just that this middling script isn’t up to the task of accentuating their strengths as performers, instead saddling them with awkward dialogue and leaving them to do questionable emotional heavy lifting. Adkins and Jai White have a much easier time here, on the other side of the good guy/bad guy binary, chewing the scenery and spitting out pithy one-liners left and right, but it’s still difficult not to be disappointed.

For it to function optimally, Triple Threat needed a lither premise and more svelte plotting. All it truly needed was more efficient storytelling and the bare minimum of narrative necessary for successive showcasing of these brilliant fighters beating the living shit out of each other. As it stands, their collective charisma and explosive proximity to one another is enough to make this at least marginally entertaining.