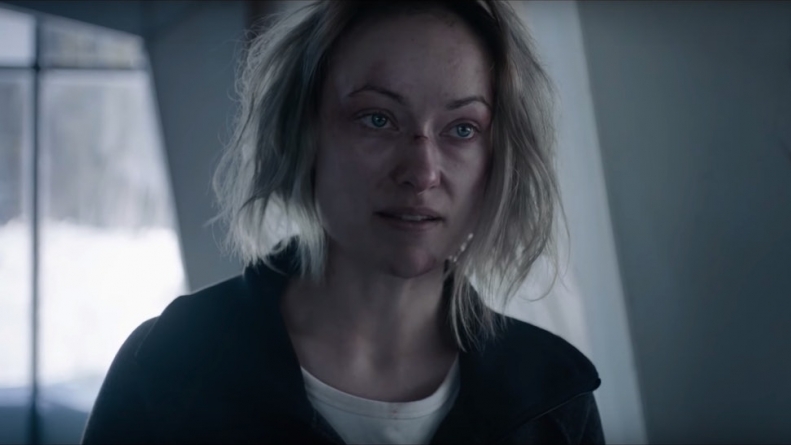 For all its other flaws, Daggar-Nickson’s film deftly avoids the pitfalls of so many other revenge-themed films.

Following a chilling voiceover of a frightened woman organizing a takedown of her abusive husband, the blandly titled A Vigilante opens with Olivia Wilde’s vengeance-minded protagonist rapidly and viciously punching a heavy bag for nearly 30 seconds. That’s a fittingly on-the-nose sequence for a film that proceeds in an equally well-worn and predictable fashion, but stark cinematography and crisp editing combined with Wilde’s fiercely committed performance occasionally elevates A Vigilante above its trite screenplay.

Wilde’s Sadie has her own battle to fight against a sadistic, survivalist husband (Morgan Spector) who disappeared off the grid following an altercation that led to the death of their son. She’s scoured the forest trying to track him down, and a climactic confrontation with him seems inevitable from the start. But in the meantime, she’s fueled by using elite hand-to-hand combat skills and clever strategy to permanently extricate victims from their abusive relationships. She vows not to kill, but she nevertheless gets the job done. In one case, she roughs up a violent husband and forces him to sign over 75% of his assets to his wife before leaving town forever. In another, Sadie saves a boy from an abusive, strung-out mother, delivering him and his physically restrained brother into the hands of Child Protective Services.

Wilde sells Sadie’s singular focus and impassioned mission. She’s especially compelling when Sadie is shown in the relative safety of her car or various motel rooms in the aftermath of these life-altering confrontations, alternately breaking down into body-wracking sobs or launching into frenzied dancing as the adrenaline still courses through her. Writer-director Sarah Daggar-Nickson’s script, however, often comes across as simply too farfetched. In flashback sequences, we see Sadie at group therapy sessions, struggling to cope with her violent marriage and the subsequent loss of her son. When feeling particularly empowered, she picks up a textbook on the hybrid martial arts system Krav Maga, forcing the viewer to accept that reading a book on self-defense makes one capable of effortlessly dispatching two would-be rapists, as Sadie does in one particular scene. While Sadie relies on an assortment of wigs, colored contact lenses and other tricks to alter her appearance for her vigilante missions, it remains somewhat unbelievable that her revenge efforts would always go so smoothly, and without any subsequent retribution against herself or, especially, her clients.

And yet, for all its other flaws, Daggar-Nickson’s film deftly avoids the pitfalls of so many other revenge-themed films. By keeping the focus on Sadie as a character, and the physical and mental toll taken and cathartic benefit afforded by her vigilantism, the film transcends tropes in favor of pursuing something deeper. Violence often occurs offscreen, as the film avoids reveling in the mechanisms of righteous comeuppance in favor of homing in on the psychological effects of such action. Subject matter that can easily come off as exploitative instead receives respectful treatment. But this only makes it that much more disappointing that the plot itself can’t hold up its end of the deal. Wilde delivers perhaps the most captivating performance of her career, but she does so in service of a contrived story that, when it’s not straining credulity, offers few surprises.