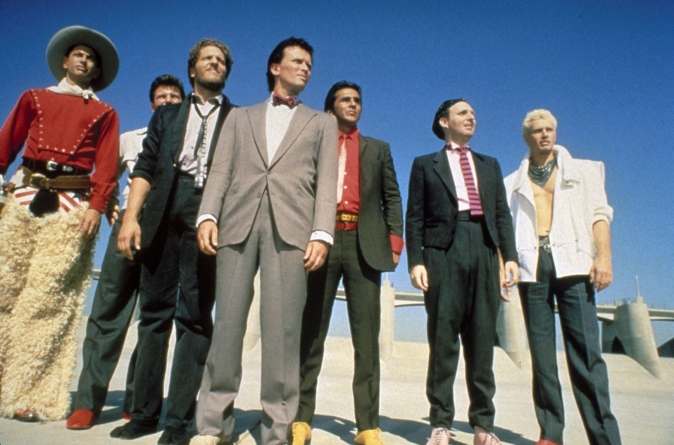 Nostalgia tends to erase the more problematic aspects of these films until a cringe-filled re-watch. Conversely, Buckaroo Banzai feels prescient.

It’s easy to forget how wonderfully weird big studio filmmaking could be in the 1980s. Memory leans toward the ubiquitous Amblin Entertainment logo and excessive lens flares, but some wildly original movies of all styles and budgets were being produced. Corporations had gobbled up the major studios, but the creative process hadn’t yet been completely corporatized. When it worked, future classics like Ghostbusters and Beetlejuice brought joy to childhoods that would one day claim to be stolen by people on Twitter. But, this is the story of one that didn’t work, not initially when its box office brought in less than half of its production budget. It was the type of film HBO would play endlessly because its rights were cheap, and that video store clerks would make a cult classic. The Adventures of Buckaroo Banzai Across the 8th Dimension or Buckaroo Banzai for short, defied obscurity by being a lean, pulp cartoon that answers the impulse all lovers of movies struggle with: what to watch when you want to something funny, smart and new, but not taxing?

As imagined by screenwriter Earl Mac Rauch, Buckaroo Banzai is a didact who grew bored of his career in neurosurgery and decides to travel the world to study martial arts and particle physics. Along the way he puts together a rock band of like-minded geniuses called the Hong Kong Cavaliers that follows Banzai on his adventures. He also has a volunteer army ready to come to his aid when trouble brews, as it always does with Banzai. Buckaroo Banzai is so cool that if David Bowie and Prince existed in his world, they would be his backup band. This sounds like an origin worth watching, but it goes unseen. There’s a plural in the title, and one of the great decisions Rauch and director/producer W.D. Richter made was to avoid telling the origin story and instead dropping the audience into an adventure in progress.

Said adventure begins with Banzai (Peter Weller) assisting a new recruit to his organization, Dr. Sidney Zweibel (Jeff Goldblum), with a brain surgery moments before he has to take his Jet Car on a test run to see if it is capable of interdimensional travel. Using the oscillation thruster he designed with his mentor, Dr. Hikita (Robert Ito), Banzai cruises through the 8th dimension, picking up a stray organism in his axles as proof of his journey. This draws the attention of the world, but one member of an insane asylum in particular, Dr. Emilio Lizardo (John Lithgow). Lizardo took a trip to the 8th dimension himself years earlier and came back infected by its version of Hitler.

Circumstances grow more complicated from there, including Penny Priddy (Ellen Barkin), the love interest who turns out to be the lost twin of Banzai’s dead wife, and the alien civil war between the Red and Black Lectroids of Planet 10. Basically, the Black Lectroids are going to trick the U.S and Soviet Union into a nuclear war if the Red Lectroids led by Lizardo aren’t stopped from returning to the 8th dimension. That’s more for incentive. The Black Lectroids are really on our side.

It’s all absolutely ludicrous, but where filmmakers like Spielberg and Joe Dante were turning to the television shows they watched as children for inspiration, Buckaroo Banzai carries itself like an old radio drama. With his impossible genius and network of followers, Banzai is akin to the Shadow, the Green Hornet and Flash Gordon. And, like a long running serial, the audience experiences a well-formed world with characters making jokes to past adventures like they were landmarks in the cultural lexicon. Orson Welles’ famous “War of the Worlds” broadcast is even a plot point.

Before taking their roles, Weller and Lithgow wanted to know the tone Richter wanted to achieve. As the main villain, Lithgow gets all the room required to deliver a maniacal performance that puts Nicholson’s Joker to shame. But Weller, Barkin, Goldblum and Clancy Brown, Lewis Smith and Pepe Serna (who play the bulk of the Hong Kong Cavaliers) play their characters cool and straight. There’s no hint of snark or irony, and the seriousness just adds to the charm.

Time has eroded the reputations of too many movies from this era. Nostalgia tends to erase the more problematic aspects of these films until a cringe-filled re-watch. Conversely, Buckaroo Banzai feels prescient. It is essentially a superhero movie that lacks the compulsion to explain everything so inherent in the MCU and other movie universes. It’s a film that teems with imagination, and that plus time led to its eventual success. It was a one-off. Perhaps it was supposed to be more, but the courage of its execution should serve as a lesson for anyone currently working in the superhero genre.