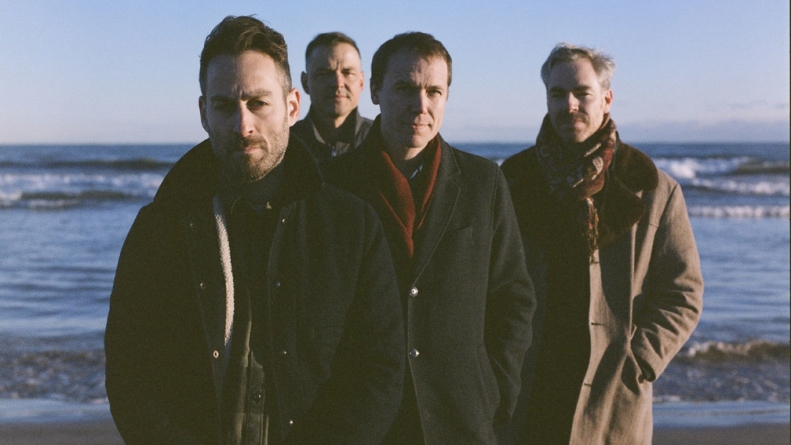 “What kind of people do you see at an American Football show in 2019?”

If the so-called “second wave” of emo had a Fertile Crescent, it would be the Midwest, so, by extension, the act of travelling to Illinois to see one of the scene’s most revered bands is nothing short of a pilgrimage back to the genre’s motherland. The release of a new album by American Football is an Avengers-esque event unto itself, and the simultaneous album release show and kickoff of their North American tour for their fantastic third eponymous album (otherwise known as LP3) seemed like the right occasion to pay tribute to the Kinsella family and the genre as a whole.

After seeing the show, I was asked by a friend, “What kind of people do you see at an American Football show in 2019?” I don’t know if I have a fair answer to this question, largely because I found the crowd just too terrible to have the energy to dissect. Reports from concertgoers who arrived earlier than I did noted this issue as well, with multiple people referring to it as “The worst crowd I’ve ever experienced,” citing an over-capacity room, bad energy and one person in the crowd heckling opener Sam Prekop of The Sea & Cake by shouting “Get off the stage, baldy!” It’s hard to quantify “bad vibes” in a meaningful way, but it was comforting to know that I was not the only person who felt like the crowd was more than a little off.

If the members of American Football were aware of this issue, it didn’t hamper their appearance in the slightest. The band took the stage amid twinkling flashbulbs and a canvas sheet draped over poles that canopied drummer Steve Lamos and touring keyboardist/vibraphonist Cory Bracken, an interesting choice, giving the stage an interesting, almost claustrophobic feeling. The band launched into LP3 openers “Silhouettes” (featuring Lamos, Bracken and bassist Nate Kinsella each playing its glockenspiel opening together) and “Every Wave to Ever Rise,” the latter of which featured Jess Price of Chicago-based opener Campdogzz (who would return later for “I Can’t Feel You”) in place of Land of Talk singer Elizabeth Powell, a worthy replacement. Any worries about the beauty of their newest record not translating as well live evaporated, as did any concerns about the crowd.

“We grew up seeing so many shows here, and it’s so fucking cool to be playing here. I look cool, right?” said frontman Mike Kinsella after these two songs. He—as well as the rest of the band—were entirely in their element, able to render the twinkly guitars and post-rock leanings of their records in a live space spectacularly. I had anxious feelings about how it would sound for the aged voice of the 42-year-old Mike to sing his 22-year-old self’s songs from their seminal LP1, but hearing him deliver “Honestly?” and “Stay Home” almost made me wish for a present-day live recording of their first album. He’s grown into his own voice so well in the intervening 20 years that any attachment to the classical Emo youthful voice attached to LP1 is easily cast aside. In banter, Mike was charming and kind, at one point ribbing the band’s friend Sarah Mitchell, who joined them onstage to perform “Uncomfortably Numb” (which she allegedly sang on the demo for), about her panic over the demo being sent to Paramore singer Hayley Williams to record: “Hayley Williams is going to hear my voice?!”

The rest of the band were fantastic as well. The proper band’s interplay sounded like that of a group of guys who have known each other since they were actual teenagers, obliterating any “But what if it’s just not as good?” feelings I had about their music going in. Most every song was augmented lightly with Bracken’s vibraphone and keyboard work, adding yet more depth to songs that were plenty vibrant on their own. Occasionally, what appeared to be their guitar tech would emerge from stage left to shake a maraca, perhaps the only time I’ve ever seen a crew member assist in the music itself. The band played the entirety of LP3, as well as a spattering of tracks from LP1 and LP2, though selfishly I wish we had gotten at least another track from the former, my only true performance nitpick.

The band closed their set with “Heir Apparent,” the children’s choir element of which was executed live with a group of kids related to the band, each bedecked in paper crowns (in hindsight, my most-wanted merch table item), alluding to the song’s closing repetition of “The king of all alone/ Heir apparent to the throne.” The band returned to play “Death in Full Bloom,” their only remaining song from their newest, as well as a pair of LP1 crowd-pleasers “Stay Home” and—of course—“Never Meant.” As they launched into the opening tumble of notes of “Never Meant,” it felt like the negative energy of the crowd evaporated, overjoyed to get to hear that song played for them and aware that, just five years prior, the idea of seeing them play that song would be a ludicrous wish. The moment arrived incredibly late in the game, but sometimes, the only thing needed to make a crowd better is to remind them of just how lucky they are to get to see a band this fantastic.