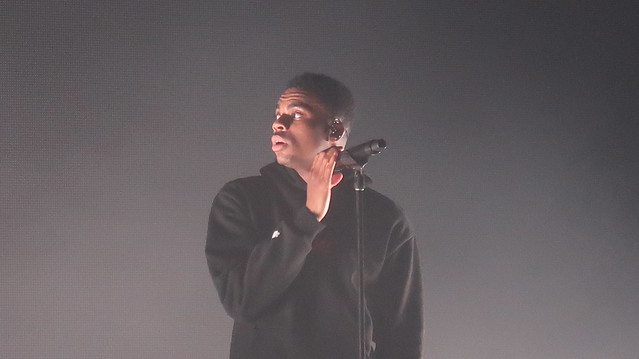 Staples brought the audience to a fever pitch while being simultaneously detached from it all.

Though I understand and respect their reasons for doing so, certain venues apply tiers to their GA section, fundamentally changing its meaning in the process. A club like downtown LA’s Novo does this, corralling off specific sections based on a first-come, first-served basis. I understand the reasons behind this, but I’d rather they just price and sell tickets for specific sections. Arriving to a show to find you’re unable to join the thrashing crowd on the floor is not the best feeling. Also, arriving to realize I’d missed Channel Tres, who was not named on the bill, only gutted me further.

For the sake of the evening, it may be for the best. While my achy frame grows less and less inclined to thrash about, the energy of those moments remains contagious. Even from my second-tier GA placement, I still felt all the rousing power of the evening’s MCs. Excitement ran high – college classes come to a close soon, summer fast approaches and the featured acts of the evening know how to run a crowd all by themselves.

JPEGMAFIA played up the exhilaration quite well, dipping into stretches and squats to get himself in the zone. A bit Danny Brown and a bit emo crowd rocker, he either gallivanted across the stage or wailed at his microphone while rolling around on the floor. At one point, he even curled into the fetal position. He peppered his performance with funny quips and one-liners between songs. “This next song was produced by a white man,” he declared as “Puff Daddy” came through the speakers. At another point, he shared some thoughts about his song “Germs”: “This song is the worst beat I’ve ever made.” Throughout the crowd, shouts for “Peggy” egged him on.

Whereas JPEGMAFIA utilized antics and a bit of tomfoolery to hype the crowd, the man of the hour needed no such tools. This being my third time seeing Vince Staples, I again was amazed by the man’s ability to bring an audience to a fever pitch while being simultaneously detached from it all. Staples’ “over it” mentality largely plays into his persona and appeal, and it still appeared to be an asset of his live show.

“Second show,” he said. “You know so much love out here, I guess.” Ever bemused, he literally handed out merch to fans, thoughtfully considering each giveaway before handing over a shirt to a fan.

He, too, felt the approach of the warmer months, opening the show with “Feels Like Summer”. As he performed, the screens behind him depicted various other scenes: owls, a topless woman and a delayed playback of Staples’ own performance. Cuts from his latest LP FM! meshed well with classics in Staples’ repertoire, including the rousing “Lift Me Up”, a song that never failed to induce a mosh pit in an audience.

The stage framed Staples in a simple cover of white light and smokescreens, all of which framed his silhouette like the emerging legend that he is. “Big Fish” and “Rain Come Down” incorporated hints of blue for a watery effect, while deep purples added a bit of menace to the cleverly named “FUN!”

By the end, Staples began cycling through some of his hardest material. “Party People” into “Blue Suede” followed by “Norf Norf” hyped the crowd to a fever pitch, and “Yeah Right” sent them over the edge. As would be expected, as the smoke cleared the stage without a fuss, so did Staples, who shouted out Mac Miller just before the screen began playing the deceased MCs Tiny Desk Concert. Leave it to Vince Staples to give the evening, his evening, to someone else.