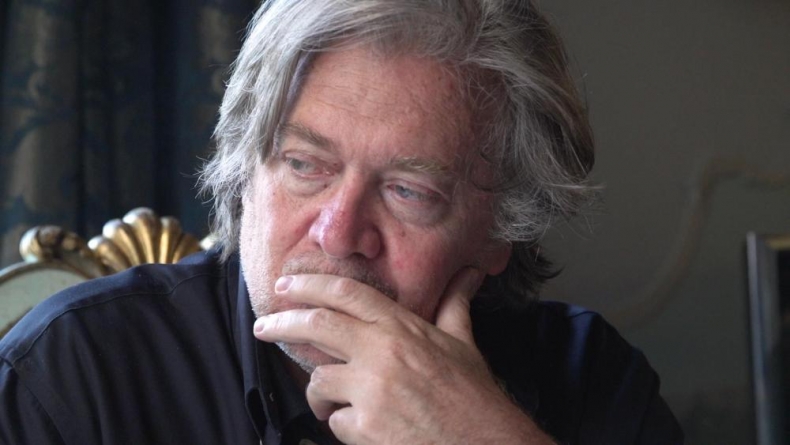 There’s just too much hate in the world for a player like Bannon not to feed on for a long time to come.

Setting aside the debate about whether deplatforming white nationalists like Steve Bannon should extend to documentaries about them, The Brink is a tight, fly-on-the-wall look at the vilified politico at work. It’s a fascinating portrait of someone who will make a significant portion of the audience’s skin crawl, and it’s framed like a behind-the-scenes mockumentary about a struggling supervillain.

What’s perhaps the most telling about the way Bannon’s particular brand of media manipulation works is how perpetually chill he remains on camera. One might expect a guy who looks—on his best days–like a Rodney Dangerfield cameo in the third act of Steven Soderbergh’s Contagion to be a hot-blooded presence in the room, the type to get apoplectic at the slightest provocation. But director Alison Klayman followed Bannon for a year, roughly from his White House ousting to the heavy losses sustained in the 2018 midterm elections; and the closest he comes to losing his temper is late in the film, raising his voice at Breitbart’s Raheem Kassam for being more interested in acting like a big shot on television than doing the work.

This makes sense given the typically workaholic tenor of Bannon’s daily routine. He carries both a Blackberry and an iPhone, bounces around a litany of nebulous consultant-type gigs from speaking engagements to hosting a radio show to advising Republican primary candidates in hotel rooms. That he’s constantly so congenial, regardless of the interaction, might make an onlooker presume this is his special public face he keeps because he knows he’s on camera. While that may be true, it’s much likelier that this is just how he always is, and that’s how he’s been able to bring white nationalism to the fore with such ease.

If one needed any more evidence of The Brink as casual look at the banality of evil, the movie literally opens with Bannon discussing the “aura” at a former concentration camp with the same implied erection Kanye West seems to have when he talks about Steve Jobs. Bannon is essentially a very gifted propagandist whose greatest asset is a gaping maw where one’s conscience might be, a porous wound through which all questionable decisions suck up like a Dyson-designed moral vacuum. It’s difficult to wrestle with because the film makes you feel like you’re just hanging out with someone you’d rather bludgeon with a bowling pin.

But there’s a necessary distance that keeps the film watchable, and that’s the never-ending sense that we’re witnessing a lost chapter in a supervillain’s arc. In the world of comics, a hero can’t fight their archenemy forever, so a publisher might put a prominent villain on mothballs for a set period of time, giving the hero other foes to tussle with. Later, when they reappear, it’s usually re-energized, with a new look and even newer compatriots.

The main thrust of this doc, with Bannon traveling Europe ostensibly to promote American Dharma, the Errol Morris film about him, but really using his time to assemble a Legion of Doom for international racists, plays out precisely like one of those long lost villain tales. Seeing Bannon have dinner with Nigel Farage and various European neo-fascists feels just like Lex Luthor offering The Joker and Gorilla Grodd space at his new swampland lair. The whole affair is as intriguing as it is blood curdling, but the longer the viewer stares, the more difficult it becomes to take it all in as a spectator.

For all the defeats he suffers through the 90-minute runtime, The Brink ends up leaving us with the intimate knowledge that no number of setbacks is going to stop this man’s quest. There’s just too much hate in the world for a player like Bannon not to feed on for a long time to come. For anyone who might question whether or not it’s a good idea to even explore the ins and outs of his ongoing campaigns, your personal mileage may vary, but be wary. The abyss gazes, also.