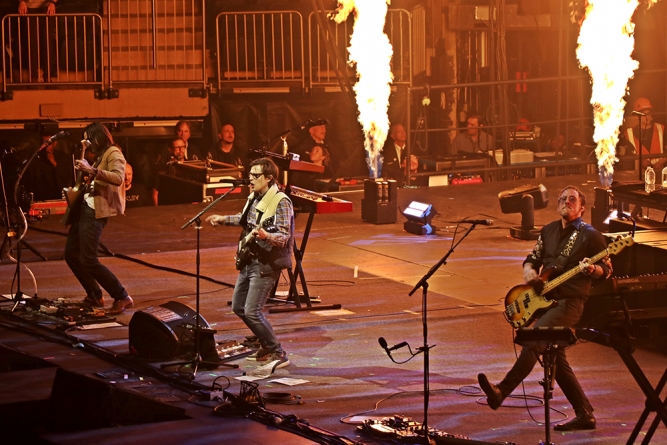 It is an interesting proposition to pair up two big-name acts that haven’t had an acclaimed album in decades for a large arena show.

It is an interesting proposition to pair up two big-name acts that haven’t had an acclaimed album in decades for a large arena show. Is there an intersectionality between Weezer’s cult of geek irreverence and the fragmented dystopia of the Pixies’ songwriting? Well, both bands are missing their original bassists but beyond that, these once-cool icons have experienced nothing but critical drubbings in their post-heyday output. Then again, the Who still tours.

Despite the airing of old hits, a 75-minute slot and the occasional roar of the guitar, the similarities between the Weezer and Pixies sets at the Moda Center stopped there. The Pixies were up first, taking the stage at 7:45pm. Though the band has been touring theaters and clubs since its Kim Deal-less resurrection many full moons ago, a basketball arena is likely not the best space to experience Frank Blank and his music. The 23-song setlist leaned heavy on Doolittle, but Black also added quite a few new and unreleased songs. A good part of the audience remained seated during the set, even throughout sure-fire movers such as “Debaser” and “Wave of Mutilation.” The songs sounded good, but the Pixies just didn’t have the energy to play a room the size of the Moda Center.

Meanwhile, Weezer knew just how to work the crowd, and when the foursome appeared doing an ironic, barbershop-quartet version “Beverly Hills” at the lip of the stage, the audience leapt to its feet and remained there for the duration of the 21-song setlist. While the Pixies played it straight, Weezer put on a show. Kicking off with hit “Buddy Holly,” complete with a backdrop that replicated the “Happy Days” motif of the accompanying music video, Weezer tore through a set comprised of hits and popular covers. It’s pretty telling when a band has a brand-new record out (another self-titled joint nicknamed the “Black” album) and they play only one track. Rivers Cuomo and company aren’t about pedaling new product as much as they are about making everyone have a good time. Why else sub out new tracks that no one wants to hear with covers of “Africa,” “Everybody Wants to Rule the World” and “No Scrubs?”

Still, Weezer brought it. The band kept things interesting with an ever-changing stage production that moved from “Happy Days” to inside a garage to a batshit blow-out reminiscent of a Slayer show complete with pyrotechnics for the set-closing “Say It Ain’t So.” At one point, while Brian Bell sang Black Sabbath’s “Paranoid,” Cuomo hopped into a boat and was led around the crowd as he shredded his guitar, stopping at the back of the arena to do solo acoustic takes of “Perfect Situation” and a-ha’s “Take on Me.”

Despite the inclusion of execrable hits “Beverly Hills” and “Pork and Beans,” this was a Weezer set constructed for the long-time fan, even if only two songs from Pinkerton appeared (“Tired of Sex” and “El Scorcho”). Still, the inclusion of “Surf Wax America” in the encore was a generous nod to the fans. Beyond Cuomo’s inane banter where he called the stage his home and claimed that the entire audience is a part of Weezer, the band’s energy lifted the show towards the level of something radical. And though some people may not like “Hash Pipe,” the song was the perfect capper to the first set: loud, dumb and full of infectious energy.