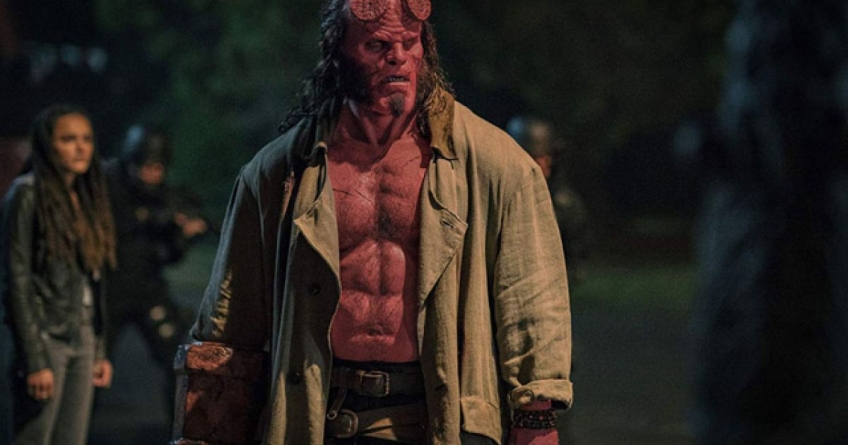 It’s a depressing testament to the superhero economy that there’s already a reboot of the Hellboy franchise.

It’s a depressing testament to the superhero economy that there’s already a reboot of the Hellboy franchise. On paper, swapping Ron Perlman for “Stranger Things” star David Harbour, and Academy Award winning director Guillermo del Toro for The Descent’s Neil Marshall, in an R-rated B-movie seems like the best scenario for this otherwise ill-advised venture. But in execution, this new Hellboy is too much of an inconsistent mess to even rank.

When the film was announced, there was reason to be optimistic. For longtime fans of the comic, it appeared the production was seeking to deliver a darker, rawer approximation of Mike Mignola’s unique source material. While del Toro’s two Hellboy films were close collaborations with the legendary comic artists, both films (especially the sequel) were surgically grafted to the horror director’s personal thematic preoccupations, making them entertaining but bastard children, twisted amalgamations that worked almost in spite of themselves.

By comparison, Marshall’s approach is both blunter and somehow even more complicated. Hellboy comics are basically their own genre. They’re a sprawling, serialized adventure story synthesizing all of Mignola’s personal obsessions into their own kind of special sauce, fusing the paranormal with film noir and action and western and horror and everything else under the sun. It makes for a fun comic book experience! But it’s hell to properly translate to the big screen, especially here, where Marshall and screenwriter Andrew Cosby have attempted to adapt four (4!) loosely tethered Hellboy comics into one satisfying whole.

Smartly, they skip the whole origin story thing, arriving with a Hellboy (Harbour) who arrives (mostly) fully- formed. He’s a big, red demon with a giant red hand who sands his horns down the way a mortal man might groom his beard. Hellboy works for the B.P.R.D, a shadowy organization that deals with the paranormal, run by Professor Bruttenholm (Ian McShane), who also happens to be his “father.” Stitching together various late-period HB tales, the gist of the plot follows the resurrection of Nimue, the Blood Queen (Milla Jovovich) and Hellboy discovering the horror of his true purpose in this world.

The chemistry between Harbour and McShane is palpable and entertaining, but it’s also one of the key issues with the film. Harbour said his entry point into making the character different than Perlman’s effortless performance was to skew his portrayal of HB younger, making him feel like an angsty, overgrown teenager. If this were set up like a prequel or an untold tale in the character’s rich mythology, playing him this way would feel natural, but it pales in comparison to the natural way Perlman injected surprising immaturity into the character. Harbour gets a lot of mannerisms and little tics right, but his odd delivery, weird voice and downright irritating attitude make him damn near insufferable.

It makes the through-line of Hellboy’s arc grating in a way neither of del Toro’s films were. This would be fine if the other parts of the film, the spectacle and genre splatter, were more coherent. But they’re all over the place. This is a 2019 film so insecure in its tone and themes that it winds up feeling like a ‘90s adaptation, from before studios were used to making 10 of these fucking things a year. There’s so many gauche needle-drops on the soundtrack, pompous camera movements and CGI blood that even the promise of a balls-to-the-wall genre thriller becomes a betrayal.

How can you make a movie that opens with Arthurian legend before segueing to a giant demon fighting a vampiric luchador and still lose your audience? If on-set reports and the extended Charlotte Kirk Gossip Cinematic Universe are to be believed, both the director and the head of Millennium Films were too distracted by a budding starlet to treat this delicate production with anything resembling panache. It’s such a shame, too, because there are enough scraps left in this middling cut of the film to suggest they didn’t start too far away from setting themselves up for success.

By the end of the film, the tone settles into something that could be improved upon in a new chapter, an eventuality the sequel-bait conclusion seemed to foreshadow. But given critical reaction and what are likely to be embarrassing box office returns, it looks like we’ll be starting this experiment all over again in another five years.