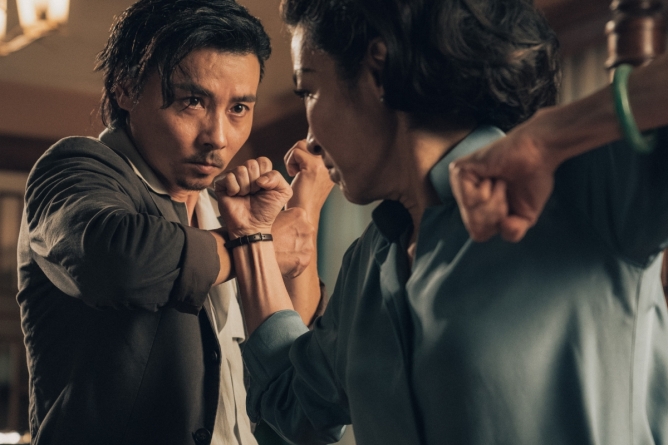 Master Z stretches the limits of how far out one can franchise a biographical film before it devolves into fan fiction.

Even ostensible biopics are getting the franchise treatment nowadays, as Wilson Yip’s Ip Man series has begat the curious “side-quel” adventure Master Z: Ip Man Legacy. With series’ fight choreographer, the legendary Yuen Woo-ping, behind the camera, the antagonist and presumptive loser from Ip Man 3 steps into his own martial arts epic on par with the films that preceded it.

At the end of that film, Cheung Tin Chi (Max Zhang) lost a backdoor fight to Ip Man (Donnie Yen) and has since retreated into obscurity. It’s the early ‘60s and Tin Chi is a grocer now, living very modestly with his young son who struggles to understand why his father, once a revered practitioner of Wing Chun, is now so low on the social totem pole. His solitude is interrupted by the encroaching reality of the neighborhood, where a madman sells opium and heroin.

The dealer, Tso Sai Kit (Kevin Cheng), has it out for Tin Chi after he breaks cover and fights Kit’s gang single-handedly, leading to a cascade of dominos falling that upends Tin Chi’s life. He goes from minding his own business and selling rice to having his place burned down to teaming up with a boisterous bar owner to take on the entire criminal establishment on the street, on an unavoidable collision course with Kit’s older sister Kwan (Michelle Yeoh), a former kingpin who has gone straight, but can’t abandon her idiot brother.

Oh! And Dave Bautista plays a westerner in league with Kit who is borderline sexually obsessed with cooking the perfect steak. Lest it seem like too bleak a rumination on crime, corruption and the perils of trying to live a simple life in a crooked town, Master Z is also a movie where Bautista powerbombs a guy to death and seems genuinely hurt that the dead guy wasted a perfectly good steak.

Master Z works so well because it knows its audience just wants to see a ton of cool martial arts shit, but the emotionally complex b-plot that supports the necessity of all this fighting is coherent and engaging all its own. The character dynamics are engrossing, the dialogue isn’t cringey, and the film doesn’t waste time endearing the viewer to its central players.

Unlike the rough Crouching Tiger sequel Woo-ping helmed, this film has a charm and elegance that make it more than just a workmanlike delivery system for artfully arranged ass kicking. His trademark addiction to balletic wire work and fight choreography that feels like three dimensional calligraphy is very much on display, with multiple sequences topping the one that comes before it. The camera work keeps up and accentuates the hypnotic movement. Even if the film’s editing is a little too frenetic at times, everything remains legible, the style never getting in the way of informational clarity.

Master Z stretches the limits of how far out one can franchise a biographical film before it devolves into fan fiction, but it does so with such flair that the producers could easily continue to spiral out from Ip Man’s core foundations for at least another two or three films. So long as the fights stay feisty and there’s a big name American thrown in like a party favor, they’ll keep doing strong VOD business stateside. It’s not exactly the most ambitious cinematic hustle, but the spoils are more than worth the grift.