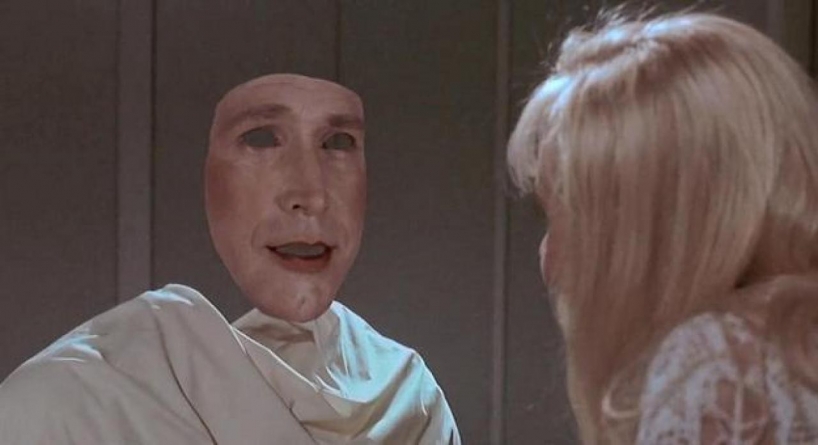 A famously hands-on auteur was ultimately cowed by his star’s predominating power over the project.

For better or worse, most John Carpenter movies bear a distinct individual stamp, with certain ideas and images appearing again and again, marking the majority of his oeuvre with an immediately identifiable quality. One of the exceptions that proves the rule, 1992’s Memoirs of an Invisible Man comes off strangely anonymous, which likely has a lot to do with the circumstances of its creation. Picking up the assignment after the departure of original director Ivan Reitman due to creative differences with star Chevy Chase, Carpenter managed to wrangle what sounds like a mess of a production into shape, but did so at the cost of any real personalizing detail. Beyond its own lackluster standing, the film also marks the start of a significant creative downslide, a deterioration that’s to date marred the remaining years of his career.

Adapted not from H.G. Wells’ 19th century tale, but Harry F. Saint’s 1987 novel of the same name, Memoirs of an Invisible Man was a passion project for Chase, who shepherded it through a long, fraught process of development. What exactly he might have seen in the material is difficult to distinguish from the film itself, which offers a few novel departures in its handling of this narrative trope, but not much else in the way of real ingenuity or craft. Caught in a freak laboratory accident after wandering off from a shareholders’ meeting, stock analyst Nick Halloway (Chase) finds himself transformed into a living ghost, his body only perceptible when he dons a new set of clothes. This presents a set of logistical challenges, not least the fact that he can’t digest food without it floating visibly in his see-through midsection.

He’s also being tailed by the authorities, who he managed to evade at the accident site, but have remained on his tail ever since. This provides one of the movie’s rare bright spots, with the sparkling, subtly unhinged performance of Sam Neill as David Jenkins, a career CIA spook introduced at a trial regarding potential war crimes committed in Honduras; the kind of ghoulish company man who’d nowadays be getting a new gig in the Trump administration. In one of the film’s few recognizable Carpenter touches, Jenkins checks all the boxes of a typical Carpenter villain, the excesses of government overreach exemplified by his sinister true believer, who uses the minimal oversight afforded by a sprawling bureaucracy to pursue his own evil ends.

Chase, on the other hand, asserts the kind of static, sucking void of charisma that familiarly afflicts overmatched comedic actors struggling to go straight, affecting an awkward downshift in tone and energy that negates his inherent magnetism. All the film’s ills are encapsulated in this tedious decision, to play the mortification of one of Chase’s usual snide, swaggering Brahmin bullshitters as moody drama instead of the humorous humbling it could so easily have become. This means that all the plot’s potentially rewarding side-roads, bits of business concerning the everyday difficulties of hailing a cab while invisible or merely eating a solid meal, get soft-pedaled in an attempt to strain instead for unearned bathos. At best, Memoirs of an Invisible Man stands as a puffed-up commentary on the difficulties of fame, one of Hollywood’s least relatable genres, and a reliable sign of a production steered by ego rather than artistry.

The film also tosses in a requisite romance between Nick and Alice Monroe (Daryl Hannah), a documentarian who he falls for the night before he goes invisible, and eventually reunites with while on the lam. Alice’s love and kindness eventually provide Nick’s salvation, but it’s the kind of hackneyed resolution that feels totally out of place in Carpenter’s oeuvre, a realm where even happy endings seem saddled with significant psychic weight. Such a conclusion provides even more proof of Memoirs of an Invisible Man’s status as a damaged gun-for-hire assignment, in which a famously hands-on auteur was ultimately cowed by his star’s predominating power over the project. As a portrait of two big Hollywood personalities at significant junctures in their careers, the results might provide a fascinating time capsule, were they not so devastatingly drab.