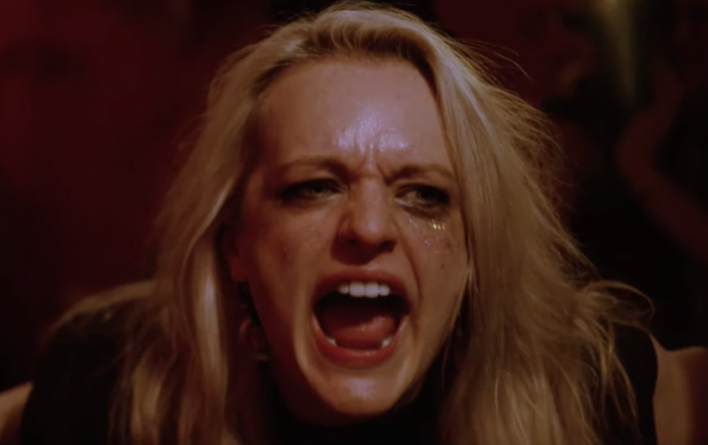 Alex Ross Perry is no stranger to complicated assholes.

“I flirt with death,” are the first words sung by Becky Something (Elizabeth Moss) in Alex Ross Perry’s phenomenal Her Smell, a scorching psychological study that probes just how accurately Becky lives up to these lyrics. Following an encore song performed by the Becky-fronted rock band Something She, Becky takes to backstage to bestow her onslaught of toxic personality upon all those around her. This includes her bandmates, Marielle (Agyness Deyn) and Ali (Gayle Rankin), as well as her ex-husband Danny (Dan Stevens) and her baby daughter, Tama. We’ll see these familiar faces throughout the film, which progresses in a series of five vignettes that profile Becky’s narcissistic taste for treating everyone around her like shit, making the moment all about herself and dabbling off screen in drugs that turn her into a psycho-babbling C-U-Next-Tuesday (as the film isn’t afraid to deem her on more than one occasion).

Taking place in real time, these vignettes are relentlessly assaultive in sound, performance and image. Moss is a hurricane of exhaustive energy, tearing her way through Perry’s impressively blocked sequences with dialogue that often feels Shakespearean in its grandiosity. It is a performative effort that is intoxicating, fatiguing, tragic, hilarious and fascinating all at once, and it’s hands down the best film work that Moss has ever done. The abusive score by Keegan DeWitt combines the manic energy of Jon Brion’s Punch-Drunk Love score with the menacing composition that Angelo Badalamenti accomplished with David Lynch; in short, it’s a nightmare. And the cinematography and editing are equally abrasive, mirroring the relentless dynamism flaunted by Becky throughout the majority of the film.

It’s easy to hate Becky, but what’s most fascinating is watching how long those around her are willing to go down with her sinking ship. Something She is no longer the sell-out-every-arena band they once were, and they certainly aren’t getting any younger (their decline in relevancy is mirrored by the rise of a fresh-faced band made up of Cara Delevingne, Ashley Benson and Dylan Gelula). There’s so much happening in Her Smell in terms of the music industry, fame, addiction and all that, but it’s all surrounding Becky, who is indubitably the eye of the storm. The first three vignettes are undeniably hectic and then Perry slows it down and meditates more for the final two (especially vignette four, which contains one of the film’s most moving moments).

Alex Ross Perry is no stranger to complicated assholes. And while Her Smell pales in comparison to his masterful venture into the literary world, 2014’s Listen Up Philip, it’s still similarly rich in thematic curiosities and characters who test our patience with every line and action. It’s vile at times, and often extremely unpleasant to watch, but the sheer captivation to be found within the ugliness is where Perry’s film truly shines. Becky’s more than a bull in a china shop; she’s a dinosaur in a porcelain warehouse filled with pedestrians. In many ways, Her Smell is a monster movie, and Becky Something is just as formidable a presence as Frankenstein’s Monster, Dracula and the Wolfman. And in certain moments, she’s even scarier.