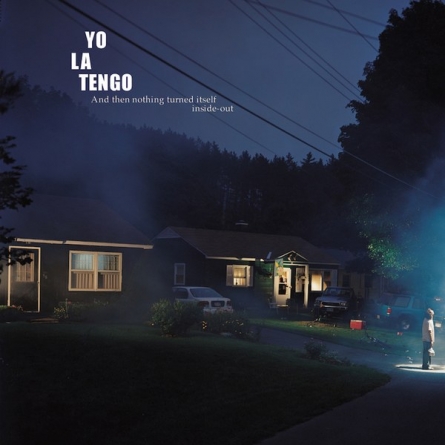 How do you follow up a classic? 1997’s I Can Hear the Heart Beating as One by Yo La Tengo presented the band with this question. A staggering work in terms of scope, they took all of the guitar pop strengths the band showed on Electr-O-Pura and Painful, tightened them to an absurd degree, and threw them into a blender with every other sonic urge they had. The end result is a band unafraid to explore wildly, approaching everything from krautrock-inspired instrumental tracks to weirdo pop songs to Neil Young send-ups with equal zeal, knocking it out of the park on each and every song. To try to recapture that kind of magic seems a recipe for disappointment.

Yo La Tengo are not the kind of band that has ever done what was expected of them, though, which makes their 2000 follow-up, And Then Nothing Turned Itself Inside-Out, such a welcome surprise. Here, they decided to pare their hyperactive ambitions down and work within a single atmosphere: one that feels, in almost every crevice, nocturnal. Nothing is a nighttime record, one that begs to be listened to on quiet summer nights. Moments of loudness are rare, leaving most of the album’s 70-minute runtime in a state of hush that the band are remarkably adept at capturing. Singer/guitarist Ira Kaplan would later say in an interview, “Our music got a lot quieter because we weren’t competing with eight other bands in a Brooklyn rehearsal space.”

Opener “Everyday” feels like a fake-out. It has the same quiet bones as the rest of the album, but the tone is ominous. A buzz and muted drum beat run through the length of the song; Georgia Hubley quietly takes the lead with a bleak list of desires: “I wanna cross my heart/ I wanna hope to die,” “When Tuesday comes, I want nothing/ When Wednesday comes, I want the same. Anything resembling Kaplan’s guitar playing is reserved for specific moments, while James McNew’s hypnotic bassline slithers menacingly though the song. The layers of “Everyday” steadily grow, heaping on the gloom by the truckload – and then Hubley begins singing a quiet “Ba-shoo-wah, ba ba-shoo-wah,” and the listener remembers that they never take themselves too seriously.

The mournful tone of Hubley makes the earnest snapshots of tender moments in the romance between Kaplan and Hubley feel all the sweeter by comparison with “Our Way to Fall,” birthing one of the most un-jaded indie rock love songs in the canon. Kaplan recounts nervous early moments and broken guitars in his classic, gentle mumble. “I remember a summer’s day/ I remember walking up to you/ I remember pretending I wasn’t looking,” he mumbles, as though bashful about his recollections. Few people write love songs like Kaplan, who sings about his wife with inspirational tenderness. Part of what makes Kaplan’s love songs so remarkable is that so many of them concern themselves with moments of minutiae. “Last Days of Disco” treats us to another snapshot of early love, complete with clumsy dancing in platform shoes, being laughed at for confusing the singers of songs, and the bizarre joy that comes from it: “And the song says ‘Let’s be happy’/ I was happy/ It never made me happy before.”

Even more incredibly, he’s able to explore the less gentle side: “The Crying of Lot G” examines the rift in a relationship with a worn sing-talk: “But it seems like it’s just a little thing/ Like you don’t want to listen/ And I can’t shut up,”” he says dazily before slipping into the song’s chorus, pleading with her to remember “It isn’t always this way.” Every song he sings is packed with tender mercy, like the weightless, organ-heavy “From Black to Blue” or the chorus of “Night Falls on Hoboken”: “C’mon, let’s leave our misery/ And crawl towards where we wanna be/ Can’t we try?.” He gets just one song to cut loose, “Cherry Chapstick,” which feels like Kaplan’s reward for doing such a quiet record. It jostles you out of position after the achingly beautiful Hubley number “Tears Are in Your Eyes,” with Kaplan freaking the fuck out and creating guitar sounds that seem closer to a wounded animal than an instrument.

Hubley doesn’t get a freak-out moment, though she gets most of the other boisterous numbers, like “Let’s Save Tony Orlando’s House,” the shimmering “Madeleine,” and stand-out “You Can Have It All,” but she’s still her own force on the album. She gets roughly half the album to shine, and even within the quiet environments of Nothing, she’s able to shine beautifully. From her gentle contributions to the languid “Saturday” to the Simpsons-referencing revenge tale “Let’s Save Tony Orlando’s House,” in which a jealous Frankie Valli burns down the titular character’s house while humming “Sherry,” each of her vocal turns on Nothing could be a showstopper on their own. Nothing gives us some of her most aching moments, like her gentle falsetto on “Although you don’t believe me you are strong/ Darkness always comes before the dawn” in “Tears Are in Your Eyes,” still capable of choking you up after 20 years.

Nothing ends, fittingly, not with a bang, but with a blissful, meandering journey. “Night Falls on Hoboken” is one of the band’s longest to date, and one of its most gorgeous. Over the course of 17 minutes, the trio meanders through a lush dreamscape, their pace wholly unhurried. “Weary guise, mine the same, why so worried?/ You can’t explain,” Kaplan coos. The band stops singing roughly five minutes into the song, the remaining 12 minutes to just the three in a peaceful, even when distorted, groove together, the song evolving slowly, noticeably, but without you even processing it – before concluding in a steady, haunting drone. These moments are some of the band’s best, an atmosphere they tried (with mostly success) to replicate this on a grander scale with Summer Sun, the Sounds of the Sound of Science instrumental soundtrack and last year’s There’s a Riot Going On, each of which explore the same mood that drove them to make this. Some may balk at the idea that a band so adept at noise could make their most compelling work when they were at their quietest, but even its revered predecessor just doesn’t feel like it matches the sheer, unbridled beauty of Nothing.