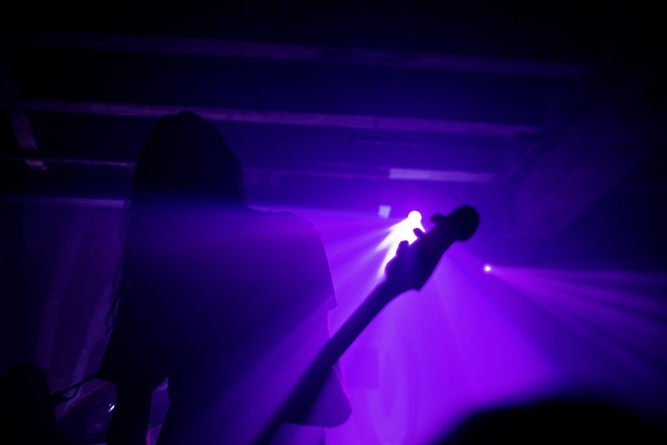 If you were savvy, you might have figured out that what happened with LA noise punks turned industrial torchbearers HEALTH was destined from the start.

If you were savvy, you might have figured out that what happened with LA noise punks turned industrial torchbearers HEALTH was destined from the start. It’s not as though their debut, HEALTH, was devoid of driving, grindy beats – it just wasn’t the focus. Their time spent in the company of Crystal Castles (RIP), along with the now-classic remix album DISCO, helped the band focus their strengths, and instead of becoming a noise punk band with scattered 8-bit beats, they became something entirely more interesting. I last saw the band in 2008, when they opened – perplexingly, amazingly – for Of Montreal, when the band were still largely in denial about those strengths. They played intense, grinding guitars, their presence onstage at Portland’s Roseland Theater giving the feeling of a band that had, unchecked, set up shop in the wrong venue, with their actual headliner playing across the street, at now-defunct punk mecca Satyricon. It remains one of my favorite pairings because, despite this, the crowd seemed to love the pairing, exhilarated by their brand of intense, loud, primal brand of rock, a shockingly good pairing for the high theatrics of Of Montral’s Skeletal Lamping tour.

Of all the venues in Portland that could house a HEALTH show (affectionately dubbed the HEALTH CODE VIOLATION Tour by the band on their always-hilarious Twitter), the Doug Fir is one I would least suspect. The venue lends itself to any style of music on the planet, but the atmosphere created by industrial music is one that doesn’t fit the swanky, subterranean lodge vibes of the room. Opener Ian Hicks made me note to a friend that it was the most aggressive set I’d ever seen at the Doug Fir, a feeling heightened by the excellent Youth Code, who combined hard-hitting beats with ear-splitting screaming from singer Sara Taylor, tattooed to the throat and bedecked in an ancient-looking Bauhaus shirt. Seeing both sets was instrumental in getting used to the sheer weirdness of this music in this space.

As expected, HEALTH have shifted as a live act in a lot of ways. Now enabled to have a light show of their own, they’re backed by a constant array of multicolored lights and motorized strobes that would point in various directions, not to mention a tasteful dose of fog machine murk, leaving the band in a near-constant state of silhouette. Guitarist John Famiglietti, when he wasn’t elegantly drifting across the stage while playing or swirling his magnificent curtain of hair, stood over an array of pedals and switches, his shadow simultaneously making me think, “He looks incredibly cool,” and, “Someone get that man a table, or at least a chiropractor.” The Doug Fir managed to capture the thick layers of their music perfectly, without turning the whole thing into an aurally-impenetrable soup, further proof that every single band should play in that space. Still, though, some things never changed, and even transformed into silhouettes, the movements of each member had a primal feel to them, a holdover from their original forms.

Over the course of roughly an hour, the band churned through seventeen songs across each of their studio albums, with a nod to their last remix album, DISCO3 (in the form of “Crusher”) and “Tears” from their soundtrack for the video game Max Payne 3. The squeals, grinds, and driving beats more or less mimic what you hear on record from a sonic standpoint, which is as close to a miracle as I’ve ever experienced. Between the superhuman drumming of BJ Miller and the electronic work of Famiglietti, and what seemed to be a healthy (or, “HEALTH-y”) backing track, it was hard to discern just how much of each song the band played. Founding guitarist and synth player Jupiter Keyes left the band shortly after the release of 2015’s DEATH MAGIC, and while my 11-year gap in seeing the band means that it’s hard to tell how much his absence onstage is missed, the three-piece version of the band is ridiculously tight, leaving me wondering just why I didn’t fight harder to see them in the last decade. It’s hard to call them “fun,” but HEALTH – in any venue – are the closest thing you can find to fun in a band that creates this much noise.