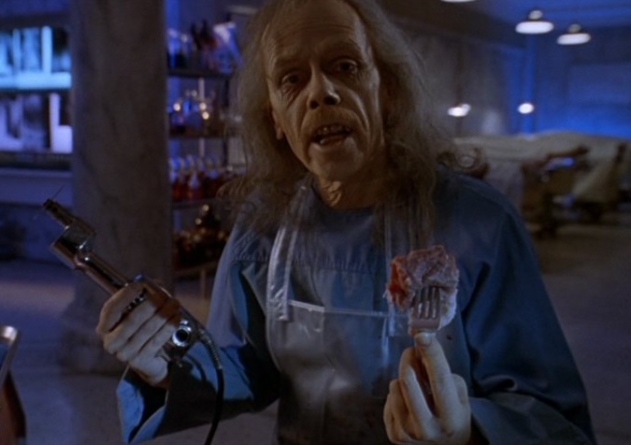 A deliciously fun distillation of why Carpenter has endured for so long.

Horror anthologies can be a mixed bag, but it’s a testament to John Carpenter’s gifts as a filmmaker that 1993’s Body Bags, his first foray into the format, is such a good time in spite of its inconsistencies. Carpenter and his wife/producer Sandy King knew how difficult it was getting this kind of film financed for theatrical release, so they teamed up with Showtime to do it for television. At the time, the network was thirsty to have their own answer to HBO’s “Tales from the Crypt.” So thirsty, in fact, that they tried to pressure the duo into making Body Bags a series that would have to be shot cheaply in Canada, a cost cutting provision that would keep them away from Los Angeles and their ready and willing pool of horror nerd cameos such as Wes Craven, Sam Raimi and others.

The film remained a one-off, a curious and entertaining exercise in horror filmmaking from two of the genre’s masters. Carpenter initially planned to direct all three segments, as well as the interstitial, Cryptkeeper-esque connecting scenes where the director plays himself as a narrating cadaver, but being in post-production on In the Mouth of Madness precluded him from staying in the director’s seat for the whole shebang. Tobe Hooper came in to helm the third segment, “Eye,” starring Mark Hamill as a baseball player who gets a replacement eye in surgery that happens to be from a serial killer. (Longtime Carpenter collaborator Larry Sulkis helped direct the Coroner sequences with Carpenter, but remains uncredited.)

Hooper’s segment is the film’s weakest point, if only because the director had difficulty blending the ridiculousness of his short’s premise with the hardened edge he naturally brought to the material. But the first two segments show off the dueling charms of Carpenter as a filmmaker.

“The Gas Station” gives us the Carpenter of Halloween and The Fog, a straightforward suspense thriller held together by expert pacing and the creative dissemination of necessary information. It looks at a young woman (Alex Datcher) working an overnight shift at a remote gas station while the news informs her there is a madman on the loose. Carpenter uses the short’s setting and the obvious fear of being alone in the middle of the night, even under the bright lights of an open business, to set up exponentially tense interactions with customers and a surly hobo. Robert Carradine as “Bill” steals the show as the madman pretending to be Anne’s murdered colleague, blending his usual quirky presence with a real malice.

But it’s the middle short “Hair,” often considered the real odd man out that ties the whole thing together. Stacy Keach plays a balding man who undergoes an experimental hair implant process that turns out to be a front for an invading alien race hoping to exploit human vanity to find host bodies for their planned Earthly coup. This segment reminds us of Carpenter’s sharp sense of humor and his ability to blend genre (here also science fiction) with a satirical look at the many ways society is always breaking down around us. Using a man’s man like Keach to so shrewdly explore masculine body image issues proves to be one of the most underrated gems in Carpenter’s entire filmography.

There’s a strong chance if they had been talked into pursuing Body Bags as a series, the quality would have decreased sharply as it drifted further from Carpenter’s influence and presence. But in this truncated format, it’s a deliciously fun distillation of why Carpenter has endured for so long, all while the man himself is having a good time in front of and behind the camera.