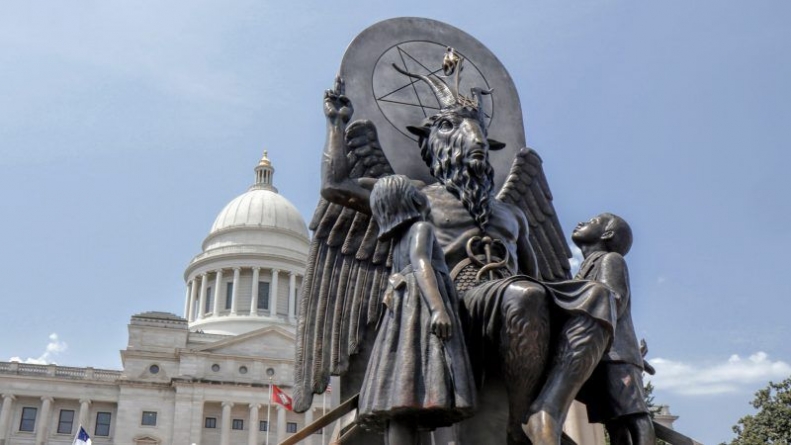 Hail Satan?, for all its atheism, chronicles the birth of a new American religion.

The subject of the latest feature by documentarian Penny Lane (The Pain of Others and Nuts!) is an organization whose seven founding tenets argue for compassion, empathy, reason, secularism, self-ownership and “nobility in action and thought.” These worthy principles, which should seem ordinary and uncontroversial, stretch back to the Enlightenment, if not way back to Ancient Greece. They’re the ideals America was based on, despite the deep contradictions our founding documents exposed once they were put into action. In a way, Lane’s stellar documentary is a celebration of old-fashioned, Mr. Smith Goes to Washington-style civic activism, of individuals fighting for a better, more decent society. It’s downright heartwarming. But it comes with a lemon twist: The heroes here are self-described Satanists.

Hail Satan? has a secondary twist, punctuated by that question mark in its title. The women and men who compose the Satanic Temple, the political and religious movement in question, don’t actually believe in the Devil, at least not in the metaphysical sense. Satan, as a symbol, has long represented opposition, the ultimate principled adversary, from Milton’s Paradise Lost to Phillip Pullman’s His Dark Materials trilogy. His worst biblical crime, in Genesis, boils down to circumventing the patriarchy and offering Eve, the mother of humankind, knowledge. That asshole serpent has some fucking nerve.

It’s easy to have fun with the chief bugaboo of Judeo-Christian holy writ. The members of the Satanic Temple wholeheartedly agree, and do so with relish. They outfit themselves in chintzy store-bought Halloween costumes. They execute outlandish rituals, studded with candles and awash in (probably cheap) red wine. They chant, intone and chew the scenery. But their ceremonies are far less grisly than your average Sunday Mass, where well-dressed congregants drink the blood and eat the flesh of Jesus. In a different context, we’d call such cannibalism “icky” and “gross.”

The misfits of Hail Satan? understand this context too well. They’re deadly serious crusaders on a mission, to bolster the crumbling wall separating Church from State. Marble monuments to the Ten Commandments have been sprouting in front of statehouses for years. Rather than call for their removal, the Satanic Temple instead seeks, in the spirit of inclusion and fairness, to erect its own idols on public lands, starting with a statue of the hooved-demon Baphomet, adorned with a pentagram and flanked by two admiring children.

This is “South Park”-level satire at its most delicious and biting, put into real, grassroots action. Though a nonfiction film, Hail Satan? feels like a spiritual sibling to Borat. Like Sacha Baron Cohen’s 2006 mockumentary, Hail Satan?’s central absurdity, and argument, is lost on unsuspecting true-believers, who come off as rubes. The ginned-up, bullshit Satanic Panic of the ‘80s endures in the American imagination, a remnant of superstitions about witches and the occult that we now tut-tut in seemingly more enlightened times.

Hail Satan?, for all its atheism, chronicles the birth of a new American religion. It’s not a term I would use. I’d call it a philosophy, or a political movement. Nevertheless, the Satanic Temple, and its members, are free to brand themselves however they like. And that’s the point of Penny Lane’s brilliant, hilarious film.

The “villains” here are regular people who deeply believe that this is a Christian nation. Lane’s protagonists beg to differ. By forming a new, outlandish theology, one where secular outsiders find a shared community, this gonzo sect confronts the godly mainstream headfirst. Their goal is a kinder, more rational society. It’s a well-intentioned, if futile, cause. Let’s all raise a glass of wine-turned-to-blood to these weirdos, even though the best fantasy, alas, still remains a fantasy.