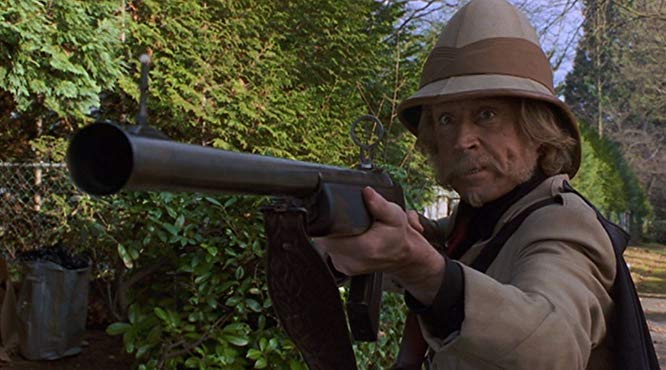 Should we have just accepted Jumanji’s CGI at the time and seen past it to the heart underneath?

There was a time when CGI in movies was still a novelty. In mid-90s, around the time of talking toys and roaming dinosaurs, we were collectively unaware of just how pervasive the technology would become. When the original Jumanji was released in 1995, it was still possible to criticize the deployment of its CGI and declare the film a silly waste of time; if the monkeys in the kitchen looked weightless, then surely the film’s story was too. It’s a line of thinking that feels precious in retrospect, awash as we are now in computer-generated fantasy. It also sells Jumanji a tad short.

This is not to say the film is a masterwork of depth and emotion. Written by the trio of Jonathan Hensleigh, Greg Taylor and Jim Strain, with direction by Joe Johnston, Jumanji takes a thin-by-design book by Chris Van Allsburg and pumps it full to bursting. The film moves fast—as kids entertainment tends to do—with narrative exposition, action beats and a logic that makes sense only at speed, not in reflection. That the film starts out with a nested prologue is proof enough of that alone. Starting with the burial of the titular cursed board game in 1869 New Hampshire, we leap ahead a century to a boy named Alan Parrish (Adam Hann-Byrd). Here the film begins to build its emotional superstructure, a conflict built around Alan, his friend Sarah (Laura Bell Bundy) and his restrained father, shoe magnate Sam (a perfectly cast Jonathan Hyde).

As if that’s not enough, Jumanji jumps forward again 26 years and introduces us to Judy (Kirsten Dunst) and Peter (Bradley Pierce), two orphans moving into Alan’s old, abandoned house with their aunt Nora (Bebe Neuwirth). It’s a surplus of plot—especially given the 32 pages of source material—but it all leads up to the main event: the return of Alan, trapped in the jungle all those years, and the release of said jungle’s horrors into their aforementioned New Hampshire town. In the present, Alan is played by the late Robin Williams—then at the peak of his powers—with his usual manic energy, albeit edged with a sad-eyed, knowing twinkle. His Alan may have transformed into a competent force of nature, but at the cost of his nebbish youth. Williams is likely one of the few actors of his era who could convincing relay both sides of this feeling, while also overpowering the film’s considerable CGI budget.

So, about Jumanji’s animals. In the film, the four players of the board game—Judy, Peter, Alan and a now-grown Sarah (Bonnie Hunt)—are forced to take turns rolling the dice and unleashing the game’s effects on their world. This includes giant mosquitoes, a pack of insane monkeys, one hungry lion and a stampede straight off the savanna. It’s not hard to spot when the film turns up the CGI, though there are enough practical effects to keep things somewhat grounded. In their wake, our quartet of players are left running to and fro around Parrish manor and the surrounding town in a bid to stay alive, complete the game and set everything as it was—all the way back to 1969. It’s in this last concept that Jumanji earns a level of resonance that extends beyond the usual smash-and-bang children’s films of its day.

That’s thanks to the character spin given to each of the main players, and even side parts like Hyde’s Sam and one of his employees, Carl Bentley (David Alan Grier). While, yes, Jumanji has the requisite slapstick—including an absurd sequence in the town plaza ripped straight from Home Alone—it finds ways to be more than just loud. In the process of playing the game, each character is pushed to overcome their own fears beyond merely running for their lives from marauding wildlife. The film’s use of time becomes an asset here too, with each character taking stock of where they are now and what they’ve come through.

Exemplifying this is Jumanji’s clever use of Hyde in two roles. He bookends the film as the taciturn father of the Parrish clan, and also appears as Van Pelt, a hunter hellbent on killing grown-up Alan. Given the setup of that ‘60s prologue and Alan’s childhood weakness, there’s a wonderfully dark current coursing through Williams’ scenes with Hyde, the boy attempting to best his father in a life and death struggle. Despite its inevitable hurry, the film also makes time for Peter and Judy to deal with their shared trauma, for Sarah to address her emotional issues and for Carl to try his damndest to be a hero. Not bad for a film with multiple monkey-related punchlines.

Should we have just accepted Jumanji’s CGI at the time and seen past it to the heart underneath? It’s a question worth asking, especially when considering the film’s recent relaunch as a starring vehicle for Dwayne Johnson. In the 2017 film, helpfully appended with the subtitle “Welcome to the Jungle,” we get more advanced CGI and much bigger action. But the film’s emotions are flattened into obvious clichés. If the original version was Psych 101, this new Jumanji is elementary. Maybe it was inevitable; or maybe, despite Johnston’s workmanlike direction, we didn’t quite realize how good we had it at the time. And unlike his original film’s conclusion, there’s no going back now.