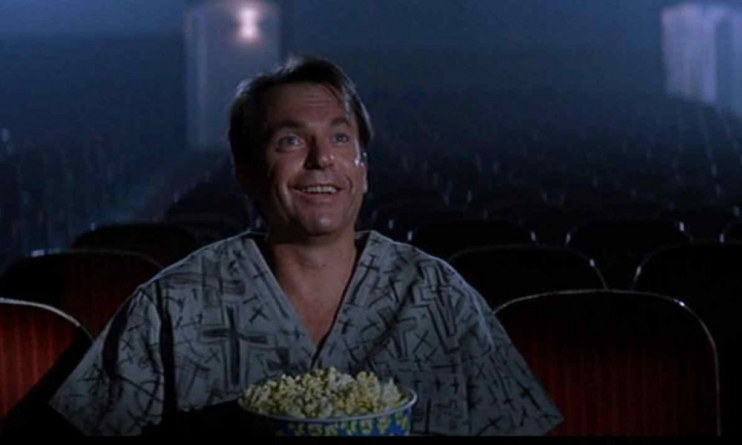 Distills Carpenter’s thematic sensibilities into its purest form, conveying the central thesis of his horror films that nothing is quite as it seems and evil lurks beneath even the quaintest, most idyllic facades.

Bodily possession ripples through John Carpenter’s self-described Apocalypse Trilogy. With 1982’s The Thing, the sinister force is extraterrestrial: a tentacled, shapeshifting alien taking full possession of a group of cabin-fevered men in an Antarctic outpost, consuming and then mimicking them down to the last whisker. In 1987, Prince of Darkness presented a supernatural entity—none other than Satan himself—manifesting in the corporeal form of a strange green liquid and absorbing his way into bodies turned into demonic vessels. For 1994’s In the Mouth of Madness, the source of bodily possession is even more nebulous and abstract: stories from the world’s best-selling horror author worm their way into readers’ brains and unleash an ancient evil upon the world.

The invasive bodily takeover found in the trilogy ramps up the gorier aspects of Carpenter’s horror aesthetic, taking the unyielding marauding forces that run throughout most of his work and internalizing them. Whether it’s the home-invasion-by-pure-evil made manifest in Michael Myers in Halloween, the hordes of vengeful gangs or pirate ghosts in Assault on Precinct 13 and The Fog, respectively, or a regenerating, cherry red car infiltrating the mind of its owner in Christine, Carpenter’s baleful villains keep on coming until something stops them. But it’s primarily through his Apocalypse Trilogy that Carpenter lets the invading forces contort and disfigure his protagonists, using memorably grotesque body horror practical effects to achieve a visceral reaction that’s far greater than just shock value.

In many ways, In the Mouth of Madness distills Carpenter’s thematic sensibilities into its purest form, pulling the rug out from under his protagonists and the viewer alike in conveying the central thesis of his horror films that nothing is quite as it seems and evil lurks beneath even the quaintest, most idyllic facades. As insurance investigator John Trent (Sam Neill) attempts to piece together the mysterious disappearance of the world’s best-selling author, Sutter Cane, he ultimately discovers the mind-bending truth that Cane’s writing shapes reality. In telling this story, Carpenter touches upon many of his most common tropes: mass hordes of shambling grotesques, consumerism run amok and the unyielding persistence of evil. All three are embodied in none other than Cane’s agent (Conrad Bergschneider), turned feral under the malevolent influence of the horror writer’s work, as he slams an axe into a diner window and shocks Trent out of his smug self-confidence while planting the seed that all is not right.

In this world, Cane’s work is more prevalently published than holy scriptures. So it’s no coincidence that, like Prince of Darkness, the film intersects with religion; Trent finally discovers Cane (Jürgen Prochnow) holed away in a surreal church within the liminal, and heretofore imaginary, New Hampshire town of Hobb’s End. But unlike some of his other films, Carpenter doesn’t dwell too long on any one satirical point. He’s not as overtly anti-capitalist as in They Live, he doesn’t steep the film in the same degree of religious trappings as Prince of Darkness and he pits Trent as more of a skeptic than one who succumbs to the potent paranoia found in The Thing. Even as Cane begins playing metaphysical mind games, Trent clings to his incredulity, and it’s not until the author writes publishing rep, and Trent travel companion, Linda (Julie Carmen) out of existence that Trent finally goes crackers.

With In the Mouth of Madness, Carpenter also made perhaps his most self-referential film. While on the surface, he seems to be satirizing the widespread influence and commercial appeal of Stephen King—who is namechecked here and whose Christine the director adapted in 1983 after the commercial flop of The Thing—on a deeper level, Carpenter chides the general human tendency to worship creative geniuses. As our own Jake Cole argued last fall, Trent’s initial distaste for the horror genre (only to eventually find himself trapped as a character within such a story) perhaps echoes Carpenter’s own sense of being pigeonholed into one particular genre. If that’s the case, he masterfully intersects that personal sentiment with cultural critique, succinctly summed up by an exasperated Trent shouting, “God’s not supposed to be a hack horror writer!”

The debate over predestination versus free will stretches back millennia, and it’s the push and pull of this theologically-tinged philosophical conundrum that thrums at the core of this unique exercise in surreal horror. Both predestination and free will alternately possess their own comforts and terrors, our desire for personal autonomy often butting up against our need for security and the belief that someone or something is looking out for us. On a secular level, that sense of security is often derived from the idea that there’s an objective, universal “reality” that able-minded individuals should be able to agree upon. Far more than the lumpy, tentacled monsters that lurk just underneath the film’s placid, small-town veneer, In the Mouth of Madness draws its sense of dread from the prescient notion that reality is a fiction manipulated by the whims of the powerful.