What’s your biggest “I should have seen them when” regret? In 2009, I skipped seeing Gaga (post-The Fame) in the Wonder Ballroom, boasting a capacity of just 700, because “I didn’t feel like going out.” If I had a time machine, I’d go back and catch the shows where I missed my very last chance to see a star on the verge of explosion, the last opportunity to see their magic in a small venue. Determined to never make the same mistake again, I set out to catch Lizzo – hot on the heels of Cuz I Love You, her own personal rocket to mega-stardom – for one of her two sold out nights at the Roseland Theater. Hype for these shows was big enough that she’s playing two more nights at Edgefield Amphitheater this summer – a stepping stone on her way to stadiums and arenas worldwide. 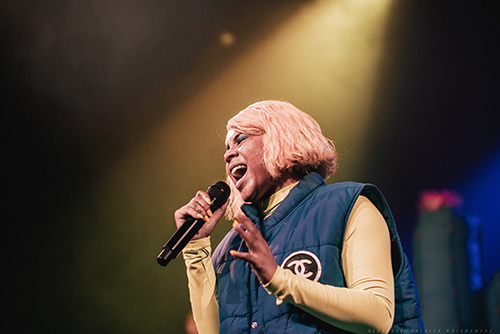 Dallas-based Tayla Parx opened, flanked by inflatable cacti and dressed in a sky-blue turtleneck and hot pink tracksuit – “I’ve been a tomboy all my life, but I woke up one morning and I fucking love the color pink?!” It doesn’t bring me joy to say that her set fell prey to some of the most egregious sound I’ve ever experienced, full stop. The vocal mix was deplorable. Between the muffled sound of Parx and the unforgivably loud audience, even her banter was regularly incomprehensible. It was like there was a towel over the mic. As a result, the set felt like the concert equivalent of hearing really good music blasting in someone’s car, but with the windows rolled up. You want more, and it sounds like it’s probably quite good, but it’s too hard to make it out. It’s a real shame, because her swagger was just enough to get a chunk of the audience engaged, her infectious smile beaming constantly as she bounced around the stage.

Once Lizzo came out, the crowd truly erupted, greeting her with ear-splitting screams and two-plus minutes of applause. Dressed in a bright red leather one-piece, fishnets and red elbow-length gloves, she stood alone and immediately brought the house down with the title track from Cuz I Love You. Performing in front of an array of brushed steel panels, with two guardrails flanking a DJ table, her stage setup felt delightfully tasteful, giving her and her dancers – The Big GRRRLS, who came out one song later, dressed in red faux-midriff tracksuits – plenty of room to work with. “I’m in my favorite city in the gotdamn world – on my birthday!” Lizzo announced to cacophonous screams and an impromptu happy birthday chorus.

Lizzo has the stage presence needed for the levels of fame she’s headed for. She’s pure charisma and exuberance, capable of palpable chemistry with anyone onstage with her. She cranked through a solid 18 songs in the span of 90 minutes, each song inspiring its own levels of enthusiasm from the crowd. Newer songs like “Tempo,” “Throw Like a Girl” and “Soulmate” resulted in pure waves of audience joy, happy to shout, “I’M MY OWN SOULMATE/ I KNOW HOW TO LOVE ME/ I KNOW THAT I’M ALWAYS GONNA HOLD ME DOWN” and “IF YOU FEEL LIKE A GIRL THEN YOU REAL LIKE A GIRL/ DO YOUR THING, RUN THE WHOLE DAMN WORLD” with the queen herself. The crowd that turned out for Lizzo was among the most woman-dominated I’ve ever seen. Her message of self-love – the real kind, the type that accepts that you cannot be happy all the time – struck at exactly the right moment to make her the pop star women in their 20s and 30s need right now, an antidote to the constant stream of negativity and self-hate most of us feel. A Lizzo show is half concert, half well-produced pep talk, asking the crowd to repeat positive affirmations of “You’re beautiful, I love you. You can do anything,” and “I love me! You don’t love me? What’s wrong with you?” She reminded us that “Your emotions are for YOU,” and railed against the commodification and marketing of “self-love” and how impossible it is to “keep it 100” at all times: “Do not sell us on the idea that self-love is one super constant happy thing. Recovery is part of self-love, too,” she said to cheers of agreement.

The best part of the show – one that I hope doesn’t fade as she gets bigger – is that she’s still clearly having boatloads of fun onstage, taking moments to be silly. On a couple of occasions, she took a couple comically long time to wipe the sweat from her chest and fix her hair, and later suggestively slid her wireless mic into the o-ring on her one-piece. After her closer of “Good as Hell” and as confetti rained down, she was presented with a birthday cake and a second round of “Happy Birthday,” which left her looking truly speechless. These are moments that just don’t exist in arenas, and as she played a finale of Cuz I Love You’s “Juice” – complete with her flute – it was hard to ignore how magical and uplifting the night felt.