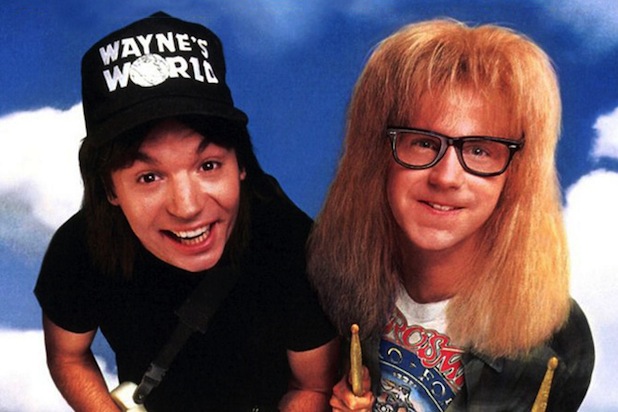 Wayne’s World shouldn’t be the topic of this feature. My revisit was literally accidental, due to a recent slip and fall. Before the mishap, the film represented little more than a childhood obsession, a warmly remembered relic. I’d once studied Wayne’s World like the Torah, quoting its catchphrases (“Ex-squeeze me? Baking powder?”) and replaying its indelible scenes, over and over again. That iconic “Bohemian Rhapsody” sequence just about wore out my VHS copy. And yet, as time has worn on, that tape far outlasted my interest in its contents.

One cracked rib and a partially collapsed lung later, I found myself with time to kill and Wayne’s World beckoning me on Amazon Prime. The movie doesn’t just hold up. It hasn’t simply aged well. (Well, mostly.) Turns out, this goofball mollusk contains a pearl: a brilliant screenplay (co-written by Mike Myers, and Bonnie and Terry Turner) teeming with knowing silliness (see the “camera one, camera two” bit, and a loving “Laverne & Shirley” homage) and postmodernist surprises (our duo’s penchant for fourth-wall breaking, the story’s multiple endings). Most of the gags director Penelope Spheeris packs into a fleet, 95-minute runtime still feel giddy and inspired. Its central duo is charming and, despite their slacker personas, Wayne and Garth are the smartest guys in the basement. Rediscovering Wayne’s World was (almost) worth a visit to the emergency room.

Despite the excellence of its individual moments, hilarious vignettes alone do not a great film make, not even when the bar – a big studio picture based on a wildly popular Saturday Night Live sketch – is lowered a few notches. Wayne’s Word succeeds because its bricks (what we’d now call meme-worthy clips) are held together by mortar that mixes sharp satire with a lived-in, hangout sensibility (one that predates Dazed and Confused by more than a year). All of its elements join in harmony, with nary a seam in sight, more like a work of sculpture than architecture.

Wayne Campbell (Myers at his comedic apex) and Garth Algar (the woefully underrated Dana Carvey) are local celebrities in a Chicago suburb. They hit it big after a slick producer named Benjamin (Rob Lowe, literally Chris Traeger’s evil twin) homes in on their unpolished, cult sensation of a weekly show. Benjamin’s cartoonish villainy isn’t limited to corrupting our dynamic duo’s artistry, such as it is. He also targets Cassandra (a fierce Tia Carrere), Wayne’s new girlfriend, the lead singer of an up-and-coming rock band also on the precipice of stardom.

Wayne’s World nimbly walks the tightrope of taste, between low and high. An Alice Cooper concert (low) leads to an academic discussion about Native American history and the etymology of “Milwaukee” (high). Wayne humiliates his corporate overlord, on-air, with surreptitious insults (“A-sphincter-says-what?”) (low). A character references David Cronenberg minutes later (high). Chris Farley shows up (low) to regurgitate facts that set the stage for an elaborate climax (high). And so on.

Wayne’s World marks an early example of modern Hollywood spinning low-rent straw (two late-night dudes on NBC, playing two late-night dudes on public-access television) into blockbuster gold. (I suspect a handful of screenwriters shuddered, a dark premonition of the Disneyland rides and Lego sets lying in wait.) The movie doesn’t only acknowledge this central absurdity; this central absurdity inspires its plot, themes, and characters’ motivations. It was “meta” before we started calling everything “meta.” And it’s far better than an adaptation of a five-minute sketch deserves to be. Once we arrive at those smart, fake-out endings, the smoke screen has blown away. This isn’t the cinematic equivalent of the class clown. It’s a top student, doing its damnedest to play dumb.