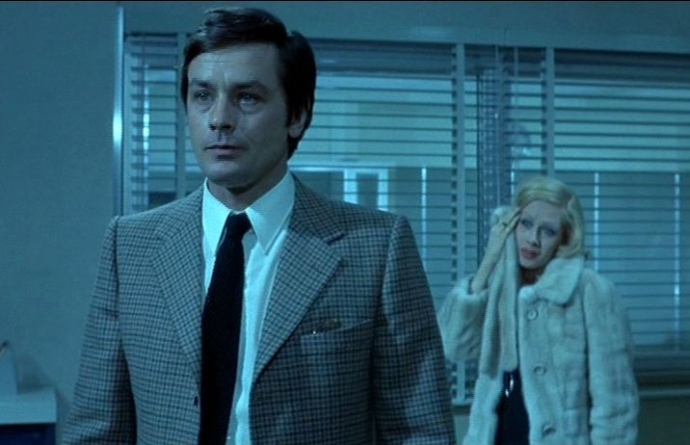 Un Flic, the last film Melville ever made, is not often in the discussion as one of his masterworks

To say a Jean-Pierre Melville film is underrated is to perhaps overstate the case. The French writer-director is well known for his classic noir films such as Bob le Flambeur and Le Samourai, as well as Léon Morin, Priest and Army of Shadows, his film on the WWII French Resistance, wartime action in which he played a real-life part. Between 1949 and 1972 he directed 13 feature films, and while his work didn’t earn him many awards, his legacy as a first-class filmmaker is secure. So then, what’s there to underrate about Jean-Pierre Melville?

Let’s start at the end. Un Flic, the last film Melville ever made, is not often in the discussion as one of his masterworks. And it doesn’t get lumped in with the other noir classics he wrote and directed—despite a starring role for actor Alain Delon, despite being built around the same cops-and-robbers framework, despite its terrifically lean premise and despite being quite good. These are extremely imperfect metrics, but it’s hard not to chuckle at Un Flic’s Rotten Tomatoes rating of 78 percent, the lowest among the films Melville directed; it also happens to be one of just four Melville films that hasn’t earned a spot in the Criterion Collection. So yes, while it’s fair to say Melville himself is definitely not underrated, Un Flic has been a tad left out. Fortunately, that place in history suits the film quite well.

That’s because in effect Un Flic is an abstraction. It is Melville’s style distilled to its essence. It is a film with a potent emotional punch delivered subtly by a craftsman of unique ability. And while he may have achieved this more successfully with Le Samourai, Melville’s final film acts as a more fitting grace note to his entire career.

Un Flic centres on a duo: the titular cop—“flic” in French—Edouard Coleman (Alain Delon) and the crafty thief Simon (Richard Crenna). We meet the latter first in the extended bank robbery sequence that opens the film. The details on Simon at the outset are kept to an absolute minimum. We know only that he is the leader of a squad of four men (including actors Riccardo Cucciolla, André Pousse and Michael Conrad) and good at what he does. The film goes on to establish Simon as a rogue, moonlighting as a charming nightclub owner but capable of violence and a certain viciousness. This is in contrast to the ostensible good guy, Edouard, who seemingly spends all of his time being called to Paris crime scenes with his taciturn partner Morand (Paul Crauchet), his appearance in the film prefaced by a quote from Eugène François Vidocq: “The only feelings mankind inspires in policemen are indifference and derision.”

Shot in a gloom pierced only by neon and headlights, Un Flic is a cold film. Which makes it all the more surprising when we discover how exactly Eduoard and Simon are connected. In the best crime story tradition, it involves a woman. And in this case, it’s not just any woman, it is Catherine Deneuve as Cathy. She’s with Simon, but sneaking around with Eduoard; in the former’s service, but willing to aid the latter when she can; caught in the middle, but steadfastly refusing to be trapped. Now we begin to understand what Melville is doing in the film, beyond the machinations of its cops and robbers plot, the film’s duet expanding to a trio. How these men rely on and use Cathy exemplifies who each of them is, how they operate in the world and ultimately what they mean to each other. It’s this interpersonal tension that sustains the film as it moves through its crime plot paces. Asked by Cathy whether Simon knows of their affair, Edouard is succinct: “He doesn’t suspect. He knows.”

Except Edouard knows things too and attempts to spring multiple traps on Simon despite what it will likely cost him in return. As it must, Un Flic is pulled to action in response, arriving at its set piece heist with Simon and crew. It’s a sequence involving a train, a helicopter and a stumpy bag man protecting the loot. Absent the pyrotechnics of today it’s almost silly, the miniatures and fake wind combining to make absurd what should be scenes of life-and-death suspense. But Melville invests so much into the details, making sure we see each and every step of Simon’s plan in real time so as to deflect from its overt filmed fakeness—and to capture what exactly the job takes. It’s a concept that feels borrowed from Jules Dassin’s Rififi, yet Melville’s emphases here make it singular.

True to noir form though, things unravel for both Simon and Edouard in different ways. In Un Flic’s recurring visual motif, the final confrontation amounts to a staring contest, Delon and Crenna’s matching blue eyes in an old-fashioned showdown. It’s the two men reading each other, as they’ve done with others in the film, and accepting—or denying—the truth of their situation. As he perfected in Le Samourai, Melville applies the tropes and expectations of the crime genre to create a climax that is simple in execution yet complicated in feeling. We understand only the smallest pieces of the three characters that make up the film’s central love triangle, could care less about its underworld intrigues and yet the conclusion of its drama affects us all the same. It’s a heist story, one it feels like we’ve seen before and almost comically tight-lipped, yet Melville gets away with it.

In truth, the film is a setup before even frame one. Its title playfully winks at us, daring the audience to see through its gimmick while being smacked by the outcome regardless. It’s just a flick, or Un Flic, but the cop at its center will have to cop to these feelings eventually. Hokey? Perhaps. But it’s too late; like the best of Melville’s films, we’re already taken.