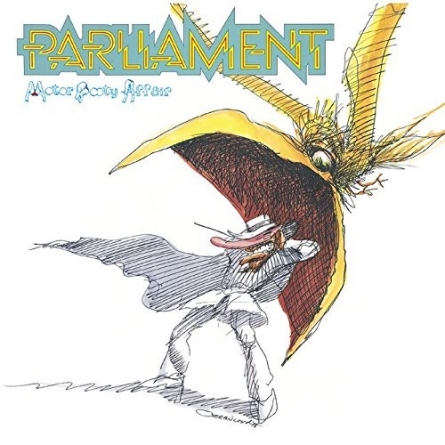 Motor Booty Affair was not the last triumph of the P-Funk collective.

The sci-fi properties of Earth’s oceans have been thoroughly examined for decades. It has been noted by authors and scientists alike that we understand more about our solar system than we do the depths of our own planet. As far back at the myth of Atlantis and its Icarian overreach of technology, the ocean has been the subject of futuristic speculation, which makes it a fitting topic pivot for Parliament, who returned from the space opera of Funkentelechy vs. the Placebo Syndrome only to dive into the sea on Motor Booty Affair. Submerging the group’s trademark rubbery bass and laser-beam synth style, Clinton and co. distended their sound with the undulating effect of water, stretching out their already loose music into something pulling apart at the seams.

“Mr. Wiggles” sets the stage with Clinton’s distorted introduction speech, intoning “From the ocean comes a notion/ That the real eyes lies in rhythm/ And the rhythm of vision is a dancer.” Clinton beckons us underwater before Bernie Worrell’s synthesizer begins to fire off strange, squelching chords that dart in and out of the coral reef shelter provided by the horns. Though the track moves at a steady, medium tempo, it piles on so many things (vocals of various shifted pitches, overlapping synth lines, loping bass) that it verges on some funk version of prog rock, almost too dizzying to even conceive for the dancefloor were it not for the rock-steady rhythm section.

But dance to it you can, and once again Parliament manages to thread the needle of producing concept-album esoterica that is still booty-shaking music. “One of Those Funky Thangs” brightens Worrell’s synths into a futuristic version of church organ presiding over a congregation of stuttering basslines and choral vocals. At one point, the vocals break down into electronic gurgling, as if everyone abruptly remembered that they were underwater and couldn’t breathe, but this otherwise straightforward banger has a muscular swing. “(You’re a Fish and I’m a) Water Sign” zig-zags out of the gate, torn between waterlogged Dixieland jazz and dubby doo-wop. A buzzing synthline cuts through the middle like an equator line, dividing the song’s two stylistic hemisphere but failing to keep them distinct as the sludgy, trawling song collapses in on itself. Closing track “Deep” could have been one of the era’s best 12” singles had the nine-minute track been released separately. An absurdly busy disco track, separate group vocals intersect and splinter over a thick groove of bass and keyboards. Other synth lines back up the horns to create a perfect future-retro backdrop for lyrics that reference nautical and emotional depth, Atlantis and the struggle against racism without ever distracting from the churning beat.

As with Funkentelechy, these bold experiments are at once epitomized and contrasted by two monolithic singles that condense the album’s experimentation into devastatingly effective pop. “Rumpofsteelskin” is a classic P-Funk invitation to dance, and Clinton’s innate understanding for wielding vocals as contrapuntal instruments is on clear display in the layering of soul screams, doo-wop crooning and electronic transmissions. The bass punches through it all like a sledgehammer, mixed front and center and hitting each chord with a tightly coiled sprang. The weirdness of Clinton is well-covered territory, but his dynamic understanding of arrangement and situational emphasis is too often taken for granted. This track is every bit as weird as the most outré moments on the album, but it is staged in such a way that the blunt impact of the group’s funk prowess hits hardest. Contrast this with the album’s (and the band’s) weirdest single, “Aqua Boogie (A Psychoalphadiscobetabioaquadoloop),” to appreciate just how much care goes into Clinton’s fever vision. Besides “One Nation Under a Groove,” this is the finest intersection of Funkadelic’s psychedelia and Parliament’s disco, wrenching Bootsy Collins’s loose bass and Worrell’s chirping synths into abstract, spacey terrains tethered only by the handclap percussion. An apocalyptic jam, the song is to the death of the ocean what “1999” is to nuclear holocaust, a defiant dance in the face of oblivion.

Motor Booty Affair was not the last triumph of the P-Funk collective; Funkadelic’s inconsistent but still excellent Uncle Jam Wants You and the warped girl-group classic that was Brides of Funkenstein’s Never Buy Texas from a Cowboy would follow in 1979, to say nothing of Clinton’s handful of classic ‘80s solo LPs. Nonetheless, the album marked the unofficial end of P-Funk’s reign of form-altering masterpieces, the conclusion of a near-unmatched run stretching all the way back to the start of the decade. Not quite the apex that was Funkentelechy, the album still managed to push the edges of the group’s mutant disco, plunging it into strange, aqueous realms. For the last time, Clinton’s conceptual and musical genius operated in perfect harmony, placing him and his small army of collaborators so far ahead of the pack that precious few other artists deserved to even be labeled peers.