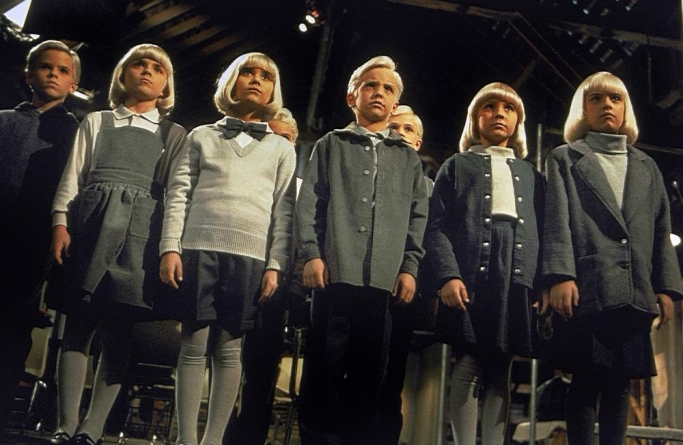 Village of the Damned definitively disappears into unremarkable ‘90s thriller territory, functioning as yet another bland entry in the director’s less-than-lustrous late period.

Much of John Carpenter’s oeuvre is predicated on the revisiting of familiar motifs. This has been the case both in his writing and directing output—rife with remakes and reimaginings—and his soundtrack work, the sonic coherence of which grants his finest films a distinctive personal character. An early fascination with themes of surveillance and control led to the trio of Someone’s Watching Me, Halloween and Eyes of Laura Mars, and many of the films that followed tended to riff in similar fashion, repurposing familiar genre material to novel new ends. This practice continues in Village of the Damned, a remake of Wolf Rilla’s 1960 adaptation of John Wyndham’s novel. Beyond functioning as another thoughtful, committed update of what others might dismiss as trashy shlock, it also continues Carpenter’s approach of cloaking sociological analysis inside tawdry pulp, at least in the early going.

Village of the Damned’s closest thematic partner at first appears to be 1980’s The Fog, another tale of supernatural reckoning set in a Northern Californian seaside hamlet, also shot in the director’s own backyard. That film’s eerie vibe is initially matched as Carpenter traces out the daily workings of Midwich, a hand-off of ordinary interactions passing perspective from one person to another. A freighted sense of dread is expertly inserted within all this routine activity, and it’s fittingly not long before disaster strikes. With a school picnic in full swing, everyone in the village passes out at once, a perplexing calamity which persists for six hours, as outside authorities place a cordon around the town limits and struggle to figure out what has happened.

The condition then wears off as suddenly as it started, and the entire citizenry wakes up without ill effect, aside from a few nasty bits of mood-setting carnage. These include the demise of faithful husband Frank McGowan (Michael Paré) whose quick trip to pick up a helium tank terminates in a miniature Hindenburg disaster after he passes out behind the wheel on his way back. With these seeds of anguish sown, Village of the Damned seems set from here to develop into a dynamic dissection of how disaster can cleave a previously peaceful community in two. Beyond the mourning and mystery, further rifts emerge when it’s revealed that a disproportionate number of the town’s women are now with child, which sets off a host of additional domestic struggles.

None of these are ever really developed, since Village of the Damned goes completely off the rails once these pregnancies blossom into births, via an expressive scene in which the dozens of simultaneous deliveries overflow the local hospital facilities. All previous conflicts and circumstances are thus thrown to the side, as is the budding tension between no-nonsense investigating epidemiologist Dr. Susan Verner (Kirstie Alley) and folksy town physician Alan Chaffee (Christopher Reeve). Instead, the action skips several years ahead to the early education of this bumper crop of miracle babies, who threaten the cathartic resolution to all these hastily resolved conflicts among the adults.

Silver-haired and frosty-eyed, the children are precociously intelligent and rotely creepy, speaking in elevated diction and moving with mechanistic precision. A monolithic entity possessed with ESP abilities and a shared hive mind, they’re a walking incarnation of the town’s shared trauma, but also a flat symbol of such and a completely tedious adversary, sucking the entire life out of the movie whenever they appear. Forced to play against this crew of sinister wunderkind, adult actors like Reeve and Mark Hamill (also completely underserved as the village’s tortured priest), who offer credible, effective performances when working against one another, are downgraded to B-movie shills, emoting into a vacuum. It’s almost as if the group is itself having a meta-textual effect, obliterating the film’s potentially interesting look into small-town dynamics the same way they do the town itself.

In interviews, Carpenter has admitted a childhood obsession with one of the malevolent girls from the 1960 original, which may explain the exhausting predominance of these characters, who would have functioned better as unsettling counterpoints to the main action, rather than front-and-center antagonists. More likely, the cut-and-dry nature of the film’s lackluster second half had something to do with studio demands; Carpenter has himself also written this movie off as a mere contract assignment, a statement which, following previous, pre-production expressions of excitement for the project, might just be a means of distancing himself from a final product over which he lacked complete control. Whatever the explanation, Village of the Damned definitively disappears into unremarkable ‘90s thriller territory, functioning as yet another bland entry in the director’s less-than-lustrous late period, in which the same thematic concerns remain present, but the mechanism for processing them has grown rusty.