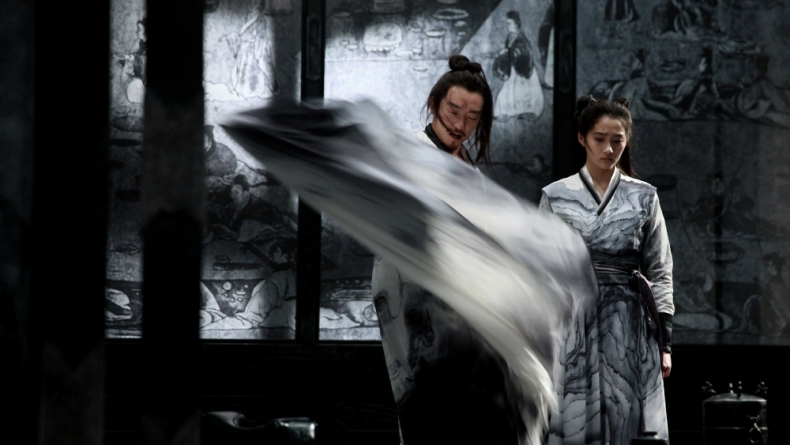 The beguiling mixture of entertainment and artistry in Shadow stands with Zhang Yimou’s very best.

The characters in Zhang Yimou’s new film Shadow dance across the screen like ink in water, twisting and swirling gracefully while the light bends artfully bends around them. Zhang, whose varied and sumptuous oeuvre has garnered him much acclaim both in and out of his native China, has always been an impressive stylist. His wuxia films, martial arts epics like Hero and House of Flying Daggers, combine audacious choreography with eye-popping visuals, while dramas like the Oscar-nominated Ju Dou and Raise the Red Lantern focus on the social and political aspects of Chinese history. Though Shadow is a wuxia film, it borrows from the subtlety and thoughtfulness of Zhang’s other work. The result is a beautiful but melancholy film that raises questions about current events even when telling a fantasy-tinged story set thousands of years in the past.

Shadow is set in the third century and follows the ineffective King of Pei (Zhang Kai), who keeps his kingdom in relative peace while living in his palace alongside his sister, Princess Qingping (Guan Xiaotong). This peace is largely due to the King’s Commander (Deng Chao), but this Commander isn’t who he seems. Rather, the true Commander is injured and in hiding and has been publicly replaced by his “shadow,” Jing (also played by Deng). Jing has been trained as the Commander’s double since both were boys. As the boundaries between the Commander and Jing become more porous, Jing and the Commander’s wife (Sun Li), who is in on the ruse, grow closer, but more important is the escalating tension between Jing (in his role as the faux Commander) and Yang, the military leader of a neighboring kingdom.

Though the plot is effective (if convoluted), one disappointing element is the lack of leading female characters. Zhang is famous for putting women front and center in his films, so much so that “Yimou girl” is a commonly used term for an actress who has shot to fame as the result of working with Zhang. However, though Sun and Guan are given some good moments and turn in great performances, they are not leads.

Zhang’s previous film, the notorious US-Chinese co-production The Great Wall, sagged woefully as a result of its incoherent, white-savior driven storyline that Zhang (at least officially) didn’t help write. Shadow is an impressive return to form, in part because of Zhang’s own involvement in the writing process. Much of Zhang’s work, particularly the wuxia films, can be confusing, but his smooth delivery keeps things rolling. In addition, The Great Wall was “epic” because it was supposed to be, whereas Shadow feels big because of its artistry and scope rather than its budget and ambition.

Shadow’s primary asset is its visual splendor, and despite Zhang’s collaboration here with his frequent director of photography Zhao Xiaoding, that splendor is strikingly different than the beauty of his previous films. His prior wuxia films in particular are overflowing with riotous color, often shockingly so, whereas the only colors that in Shadow that aren’t grey, black or white are flesh tones and red blood. Yet Shadow never feels black-and-white. By restricting themselves to a limited palate, the filmmakers exceeded what previously seemed to have been possible with black, white and grey.

Zhang Yimou’s art seemed to fade after his extraordinary direction of the 2008 Beijing Olympics’ opening and closing ceremonies. While he made lovely smaller films like Under the Hawthorne Tree and Coming Home, “bigger” pictures like 2011’s Christian Bale vehicle Flowers of War and The Great Wall lacked his former artistry. Now, a decade later, the beguiling mixture of entertainment and artistry in Shadowstands with his very best.