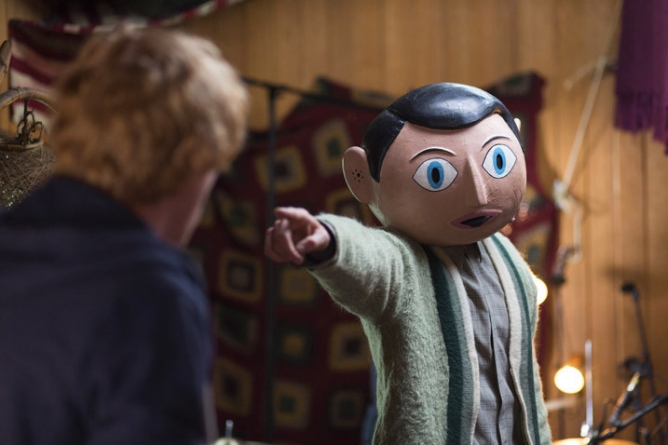 Frank unravels the idea of mad genius, rightfully pointing to mental illness as a hindrance to rather than enhancer of artistic talent.

Public infatuation with the mythos of mad genius pervades art regardless of the medium. The poverty-stricken Vincent Van Gogh is perhaps better known for severing his own ear than for his now ubiquitous paintings. Sylvia Plath’s writing is viewed through the prism of the mental illness that led her to put her head in an oven, and Kurt Cobain’s iconic status was arguably cemented by his suicide at 27. In considering self-destructive behaviors by unique creatives, we often intertwine madness with the catalyst for the artist’s genius. Lenny Abrahamson’s oddly comedic yet poignant 2014 film Frank unravels the idea of mad genius, rightfully pointing to mental illness as a hindrance to rather than enhancer of artistic talent.

Frank’s titular character, portrayed in a spellbinding performance by Michael Fassbender, leads the avant-garde band Soronprfbs as a musical savant who never removes an oversized papier-mâché mask worn over his head. While the mask may clearly be inspired by Chris Sievey’s 1980s British novelty persona Frank Sidebottom (Jon Ronson, who performed in Sidebottom’s band, co-wrote the film’s screenplay), the Frank character ultimately hews closer to Daniel Johnston, a onetime melodic wunderkind whose mental illness torpedoed his burgeoning career in the Austin music scene. With that in mind, it’s little wonder that this film, which introduces Frank as a wetsuit-clad performer emerging onstage at a tiny venue in a small coastal town in England, sets the site of Frank’s eventual mental breakdown at South by Southwest.

However, in part to keep him enigmatic until the film’s latter stages, Frank is not the film’s main character. That role belongs to Jon Burroughs (Domhnall Gleeson), a frustrated wannabe songwriter and office drone, who happens to land a gig as a keyboard player for the Soronprfbs when their second keyboard player tries to commit suicide by throwing himself into the sea. Turns out that mental illness runs through the band, as its sound engineer and original keyboardist Don (Scoot McNairy), who admits a paraphilia for mannequins, met Frank during a stint in the mental hospital. In addition to two reticent French band members, drummer Nana (Carla Azar, a session player for Jack White) and guitarist Baraque (François Civil), the Soronprfbs are rounded out by domineering theremin dynamo Clara (Maggie Gyllenhaal), who resents their new keyboardist from the start.

Though Jon hadn’t planned on the band’s trip to a cabin in the woods to be a protracted residency in order to record an album, he’s quickly enamored with Frank’s eccentricities and offbeat charisma. While Jon struggles to put two meaningful words together in his own pathetic songwriting, Frank can improvise a catchy melody and meaningful lyrics about something as mundane as carpet fiber on the spot. As Don reveals more about Frank’s creative sensibilities and compulsive choice of headwear (which he even wears under plastic in the shower), Jon begins viewing Frank as a cult-like leader whose musical genius must stem from some traumatic past. As Jon uses social media to document the lengthy ordeal of recording that band’s album, he suspects Clara, who’s obsessively overprotective of Frank, is responsible for holding back the band’s popularity and Frank’s desire to create “likable” music. When a moderately well-viewed YouTube video of the band catches the attention of some South by Southwest organizers, the band ships off to Austin, Texas, with Clara threatening to stab Jon if he messes everything up (he does).

Much like its protagonists, Frank spirals toward aimlessness in its latter half, until Abrahamson’s critique of the mad genius trope comes into stark focus at the film’s conclusion. Frank’s onstage breakdown from overstimulation and lack of creative synergy with his core bandmates, who by this point have all fallen by the wayside, makes it apparent that his illness doesn’t fuel him, and Clara is not as domineering over Frank as she is a kindred soul and his sole source of comfort. The film flits down various tangents, some comedic, such as the mannequin-fucking Don performing a tender ballad about “stillness,” and others tragic, like Don hanging himself following the completion of the band’s album. But throughout, the film’s oscillation between these poles is made cohesive through its impressive original music. From the bizarre, rambling “Secure the Galactic Perimeter” to the sweet “Lone Standing Tuft,” Fassbender dazzles as a vocalist and seems to revel in performing the majority of the film in that oversized mask.

It’s once the mask comes off, though—when Jon tracks down a recuperating but miserable Frank at home with his parents in the middle of Kansas—that Fassbender’s at his most moving. His hair patchy and forehead scabbed from the wear and tear inside the mask, Frank is a shell of himself unable to write music anymore as his parents explain to Jon that Frank had a relatively normal childhood and his talent didn’t come from some mythic origin story of torment.

Only when Jon brings him to see Clara, Nana and Baraque, who are almost cartoonishly listless while performing old standards in a dive bar, does a twinkle return to Frank’s unshielded eyes. Standing before them with his head exposed, he mumbles nonsensical thoughts about the smelly washrooms, seedy tavern clientele and appreciation for the aesthetic of the wall next to the stage. As he’s compelled by the very presence of his friends to begin linking these impressions together into a patchwork theme, Baraque hands him a mic and the band gently starts to accompany Frank as the impromptu music begins to gain momentum. Hitting a difficult high note on the line “I love you all,” he lifts his head and, for the first time, makes eye contact with a tearful Clara, who lurches toward her equipment and trembles as she adds frenzied, cosmic effects to the swelling crescendo.

Like its principal characters, a film that had seemed somewhat scattered suddenly comes sharply into focus, resulting in one of the most satisfying and stirring cinematic codas in recent memory and transforming Frank from a quirky novelty into something truly transcendent.