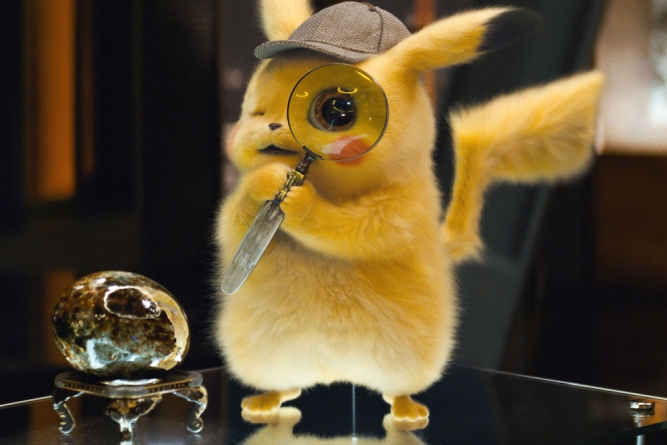 The filmmakers leave a lot on the table, failing to use its genre to its fullest potential.

With Pokémon Detective Pikachu, the Pokémon franchise has a chance to introduce audiences to a live-action take on their storied world without resorting to regurgitating the adventures of Pokémon trainer Ash Ketchum from the popular animated series. But in adapting this charming spin-off game, the filmmakers leave a lot on the table, failing to use its genre to its fullest potential.

Even those who have never played any iteration of the games or watched any adaptations of the material can easily follow along with the Pokémon world. It’s basically the same as ours, except the lands are populated with extravagant fantasy creatures humans keep as pets or train for athletic combat. This film strays from that usual paradigm of training and battling and tournaments for a lighthearted excursion into neo-noir, following a young man named Tim Goodman (Justice Smith) and an inexplicably-able-to-speak Pikachu voiced by Ryan Reynolds, who, yes, is just doing a PG-rated version of his Deadpool shtick, so glad you asked.

Tim’s father goes missing and Detective Pikachu worked with his father, so the two have to solve this mystery that involves massive conspiracies in a city where Pokémon are allowed to co-exist with humans rather than be subjugated by them. There’s a shady corporation run by Bill Nighy and a plethora of other red herrings, but it all revolves around an escaped Mewtwo, a powerful Pokémon with an ever expanding, plot-dictated list of natural abilities.

Visually, Detective Pikachu is at once sumptuous and confounding. Unlike the recent Sonic the Hedgehog trailer, all the Pokémon have rich designs that expertly split the distance between cuddly and horrific, so the world that has been production designed around them matches in a way that directly mirrors the relationship between Pokémon and humans. Sure, they stick out like sore thumbs, but not in a way that will incite hate campaigns from hardcore fans.

But for all the ink spent on cinematographer John Mathieson shooting this movie on 35mm film, there is an otherworldliness to some of the action sequences. Most of the film is rich and detailed, yes, but there’s this occasional shift into odd rendering with the special effects that almost feels like higher frame rates were used and used poorly. For a movie whose visual appeal is, like, 70% of the equation, these moments dramatically sever the otherwise coherent bond this world and these characters forge with audience members.

But the biggest thing holding Detective Pikachu back is its muddled, uninspired plot. Even with its comparatively brisk runtime, it still feels fifteen minutes too long, largely because, while it has six credited screenwriters (Guardians of the Galaxy’s Nicole Perlman and Jurassic World’s Derek Connolly among them), it is a barely there translation of the spin-off game’s narrative, with precious little extra thought given to expanding the narrative or working out interesting themes.

For a movie already owing so much to Who Framed Roger Rabbit? aesthetically, one would think everyone involved would go the extra mile towards crafting a compelling and engaging mystery at the film’s heart. Instead, we’re expected to settle for adorably designed pocket monsters and the constant presence of Ryan Reynolds’ quipping. That’s still plenty for an entertaining time to a lot of moviegoers, but it’s hard not to feel cheated.