The cult of The Princess Bride is still strong 32 years after its release. Simply say the word “inconceivable” and you can guarantee that someone will imitate Wallace Shawn’s smarmy Venetian, Vizzini. What is most inconceivable, however, is how a film that disappointed at the box office, despite critical acclaim, found its second wind in the analog afterlife of the video store, an antiquated locale that no longer has a home in the streaming world. It’s a movie that went viral before “going viral” was a thing.

Based on William Goldman’s novel and directed by Rob Reiner, wedged between hits Stand by Me (1986) and When Harry Met Sally (1989), The Princess Bride is a deceptively simple story about a grandfather (Peter Falk) reading a story to his grandson (Fred Savage, whose “Wonder Years” star power couldn’t attract the crowds) as he stays home sick from school. It’s one of those lazy days where you’re not totally bed-ridden with fever – the boy is well enough to play video games in bed – but still too weak to return to the land of the healthy. And somehow in that simple action of reading a story to an ill child, The Princess Bride works its magic. 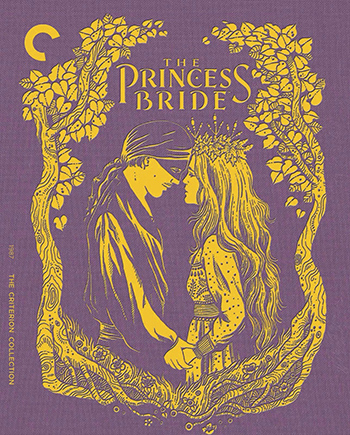 Goldman’s script doesn’t penetrate its characters deeply or try to reinvent the fairy tale genre, but instead it imbues each of its inhabitants with a catch-phrase or saying that makes them inconceivably difficult to forget. How many times have you wished someone luck storming the castle or claimed they killed your father and that they must prepare themselves to die? And yet, revisiting the film decades later, each and every scene burns indelible in the memory. Why? I fear saying anything that reflects poorly on the movie or risk being called, as Sloane Crosley writes in her essay included in the new Criterion Collection edition of the film, “a miserable, vomitous mass.”

But there is a risk when revisiting the films that brought magic to your heart as a child. Some just can’t replicate that charmed infatuation. The Goonies, a childhood favorite, is just too shrill for me these days. And others you still love begin to show the holes in the seam. Like, just why and how did E.T. die and then come back from the dead? At their best, films such as these can reconnect you with something missing from the past but is it really possible to view them with the same wide-eyed wonder of a child?

So if you’re looking to poke holes, The Princess Bride features a rather inert love story between farm boy Westley (Cary Elwes) and his mistress Buttercup (Robin Wright) who are separated when Westley is reportedly killed by a notorious pirate. When his beloved is promised to the cruel Prince Humperdinck (Chris Sarandon), Westley returns to win back Buttercup. However, much of the film keeps our young lovers separated as Westley battles a trio of mercenaries, Humperdinck’s henchman and R.O.U.S. (rodents of unusual size). “As you wish,” Westley says to Buttercup again and again. Perhaps a zestier romance is what they both really desire.

The true love story is between boy and grandfather (and is there a greater mensch out there than Peter Falk coming to read to Fred Savage on a slow afternoon?) and the bond that grows between the men in the story that he is reading. After Vizzini is unceremoniously dispatched in a cruelly humorous (but well-deserved) manner, Westley teams up with the revenge-hungry Spaniard Inigo Montoya (Mandy Patinkin) and the dim, but lovable Fezzik (WWF star André the Giant, who just may have been the most famous person in the movie after Columbo when it debuted). Numerous times throughout the film the three men help one another, sometimes even nursing someone back to health. They form an inexplicable bond and rather than quote the unfortunately staid Buttercup, it’s mainly Westley, Fezzik and Inigo that the film’s fans truly care about.

It’s easy to poke holes but it’s also easy to get lost in the magic. Leave the “true love conquers all hokum” for a different story. If that was truly the aim in The Princess Bride then the film would have likely been swallowed up by the ravages of time and left on the shelf next to Princess Caraboo. It’s easy to be skeptical, just like the sick boy who wants no part of a story with kissing, yet by the end he is begging his grandfather to return again the following weekend to revisit the tale. For the cult of The Princess Bride, this same urgency is one that hasn’t gone away and elevated this simple pleasure into something legendary.